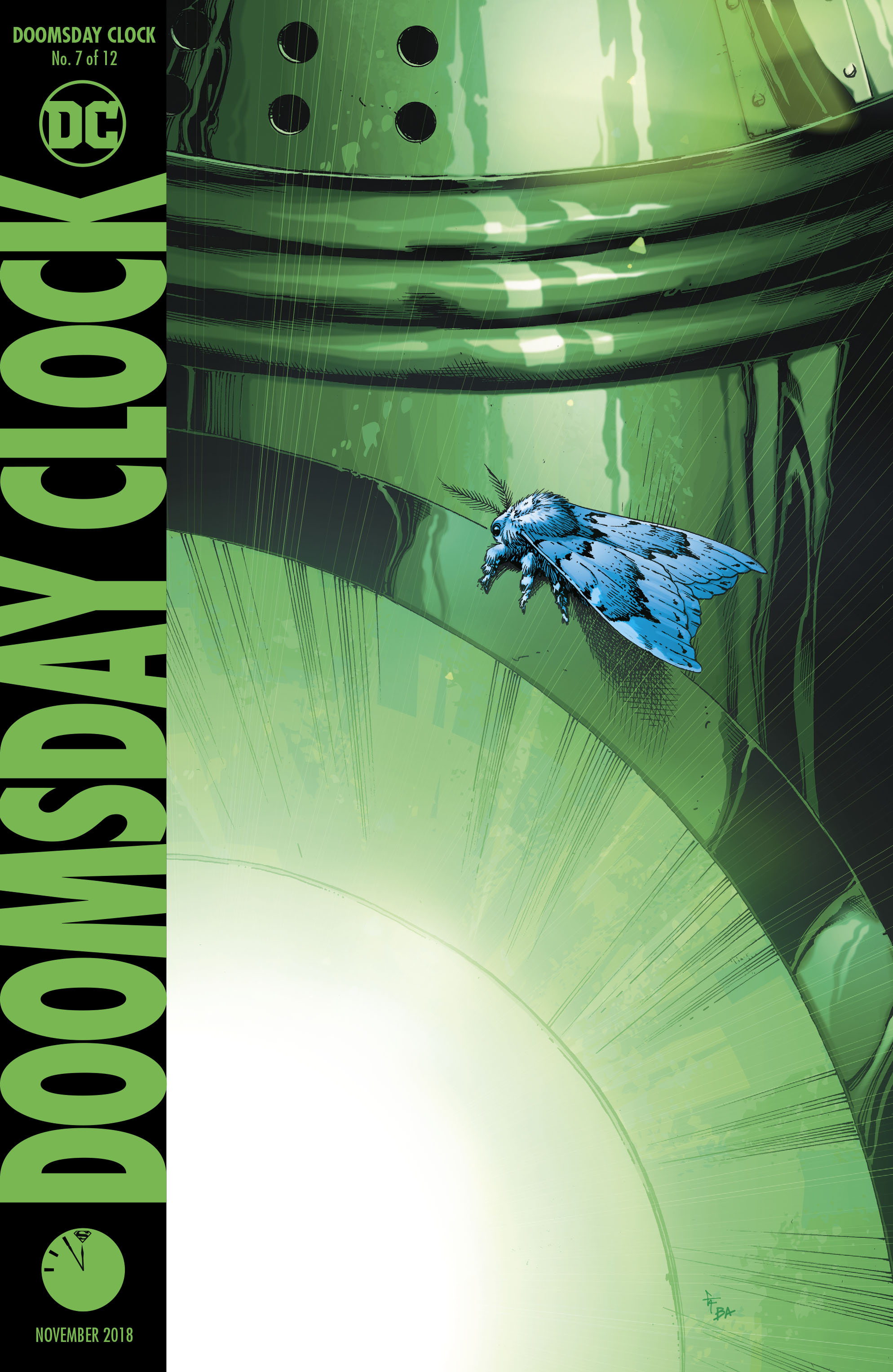 Synopsis (spoilers ahead): From the day he first clutched the lantern to his dying moment, Dr. Manhattan narrates Alan Scott’s life. Manhattan witnesses an alternate future where he moved the lantern six inches away, causing Scott to die. He witnesses a green star falling from the heavens in 960 A.D. He witnesses a mystic form a green lantern from the green metal from heaven. In January 1950, he stands over Scott’s grave. Two hours ago, Johnny Thunder finds the lantern. 145 minutes from now, green fire powerfully erupts from the lantern. 17 minutes later Manhattan steps foot on Mars. One month into the future, he sees nothing. It is 1985, he leaves his world for this one.

Johnny Thunder, Rorschach, and Saturn Girl leave from the burned down building with the Alan Scott’s Lantern. Johnny states that “he” is his best friend. Rorschach believes Johnny is talking about a genie akin to the genie in “Aladdin.” Saturn Girl tells him to not sound skeptical, “the light will help you find Manhattan.” Johnny tells the group that they can go to New York, so he can make things right. He yells the phrase “CEI-U”, but no response. Bright lights and the face of a massive owl are before their eyes.

On television, two analysts discuss the current political atmosphere. They talk about the optics and politics of the Pozhar/Geo-Force handshake, and how “fake” it was. They mention there are growing protests over Big Monster Action’s (worst superhero name out there) domestication of Japan’s kaiju. They report India’s metahuman organization “The Doomed” liberated children from human traffickers. However, one of this organization’s metahumans stands accused of “eating” the traffickers. They mention reports of Israel’s Dybbuk wiping out Iran’s Ministry of Intelligence’s computer systems. They report one of Australia’s government-sponsored metahumans tortured Chinese president Xi Jinping while he was dreaming.

Adrian Veidt (Ozymandias), Rorschach, Saturn Girl, and Johnny Thunder all listen to this broadcast while standing in the bridge of Archie, Nite Owl’s airship. Veidt asks Rorschach who his new friends are, and Saturn Girl introduces herself. She tells him that she is a telepath from the 30th century. On the television, reporters mention Superman is “the last true superhero in the world.” The unbroken trust between him and the world allows him to not be dragged into the discussion of the Metahuman Arms Race or the “Supermen Theory.” Saturn Girl states he is the reason she is an intergalactic representative of a legion of superheroes. She was sent here to help cleanse the time stream of some future event that threatens him.

Veidt winces as the pain in his head intensifies. Rorschach notices and begins to comfort him. At that moment, Bubastis’ eyes and mouth glow with a blueish hue. Veidt tells the group that Bubastis is a compass to finding Manhattan, and they now have his location.

Over in the “Joker Cave” (his words not mine), Joker has Comedian tied up in a chair with Mime and Marionette admiring Joker’s vast collection of knives and guns. Joker allows Marionette to “play” with the Comedian; if playtime consists of a drill going through the Comedian’s arm. She interrogates him to see if he had seen Manhattan. He tells her “who knows where or when he is.” Before Marionette can use the drill again, Mime warns her that the Bat is coming.

Back at Archie, Veidt and Rorschach disembark with Alan Scott’s lantern to find Manhattan, while Saturn Girl and Johnny Thunder stay on board. They walk into the middle of a fight between Mime, Marionette, and Joker against Batman. Bubastis glows even brighter, and Veidt screams for Manhattan to show himself.

Manhattan stands now before there eyes, each person shocked to see the glowing blue god.

Batman tells him he knows who he is. Joker just asks for him to put on some pants. Manhattan teleports all of the people from the “Watchmen” universe away.

Veidt tells Manhattan he had no choice but to seek him out. He came to plead for his help because he failed to save their world. Manhattan plainly tells him no, for he is in the middle of something. He explains that he has not lost interest in humanity. He looks to Mime and Marionette and explains he did disintegrate them when they robbed the bank not because she was pregnant, but because he saw what their child would do. Marionette yells what her child did, and Manhattan asks which one. He states that he does forget what has happened and what will be. With that, he tells her that she is pregnant again.

Manhattan tells Veidt pleading will not change his mind. Rorschach interrupts Manhattan and asks him to listen; Veidt is not the same man as he used to be since being diagnosed with cancer. Manhattan informs Rorschach he does not have cancer; he has lied to him to gain his help.

Veidt asks Manhattan why is he here (the DC universe) now. He tells him that he first thought he might find a place among them. But when he looked forward, he saw a vision where the most hopeful among them headed his way feeling hopeless. And then, he saw nothing. He tells Veidt he was wrong, “everything ends.” With that, he sent them all away.

Veidt gets back to Archie and disarms Saturn Girl and Johnny Thunder. He exclaims although Manhattan refuses the call, he now has the information he needs to save more than this world. He can save everything and everybody.

On Mars, Manhattan states he is now overcome with curiosity for the first time since 1959. One month from now, he sees Superman. He is yelling at Manhattan, gearing up to fight. Then, Manhattan sees nothing else. A year, century, or millennium, there is nothing to see from that point forward. He wonders one month from now, “Does he destroy me or do I destroy everything?”

Analysis: I have complained privately that Doomsday Clock has been moving too slow; today, I have gotten my wish. There is so much happening in this issue.

Dr. Manhattan asks Laurie in “The Watchmen”, “Does my perception of time distress you?” We can clearly see Manhattan’s perception of time in this issue; he is starting to become omnipresent. He is consistently in both the past, present, and future. He did this a good bit in “Watchmen” and even more in “Before Watchmen: Dr. Manhattan.” He states, “There is no future. There is no past. Do you see? Time is simultaneous, an intricately structured jewel that humans insist on viewing one edge at a time when the whole design is visible in every facet.” When a being has this type of awareness and perception, it is worrisome he cannot see one month from now. He affirms thrice in this issue he cannot see past one month.

I do appreciate a few callbacks to the original “Watchmen” during this miniseries. In this issue, Manhattan tells Veidt “I’m disappointed in you. I was. I am. I will be.” This is a callback to one of the best comic insults ever; in “Watchmen”, Manhattan tells Veidt, “I’m disappointed in you, Adrian. I’m very disappointed. Reassembling myself was the first trick I learned. It didn’t kill Osterman. Did you really think it would kill me? I have walked across the surface of the sun. I have witnessed events so tiny and so fast, they could hardly be said to have occurred at all. But you, Adrian, you’re just a man. The world’s smartest man poses no more threat to me than does its smartest termite.”

The most worrisome thing that Manhattan said though was “I was wrong Adrian, everything ends.” This is in reference to his last words to Veidt in “Watchmen”, “Nothing ends, Adrian. Nothing ever ends.” As a scientist who can see the molecular structure of everything and the fabric of space-time, Manhattan knows first hand the first law of thermodynamics, “Matter cannot be created nor destroyed.” It is quite disconcerting that he says all things will end.

I found it odd Batman said he knew Manhattan when he first appeared. How would he know? Did Bruce do more investigative work since “The Button”?

Does anyone else feel bad for Johnny Thunder? He even said the magic words and his Thunderbolt still would not appear. He cannot seem to catch a break.

For all the delays in this series, I found the art in this issue to be lackluster. Things felt rushed. The colors seemed off. Saturn Girl’s face looked like it was Jokerized in every panel she was in. She looked weird.

Final Thoughts: In one month, it seems we will have a face-off between Superman and Dr. Manhattan. When Dr. Manhattan appeared in the “Watchmen” universe, it was said of him, “The superman exists and he’s American.” He is about to go toe-to-toe with a Superman from Kansas.