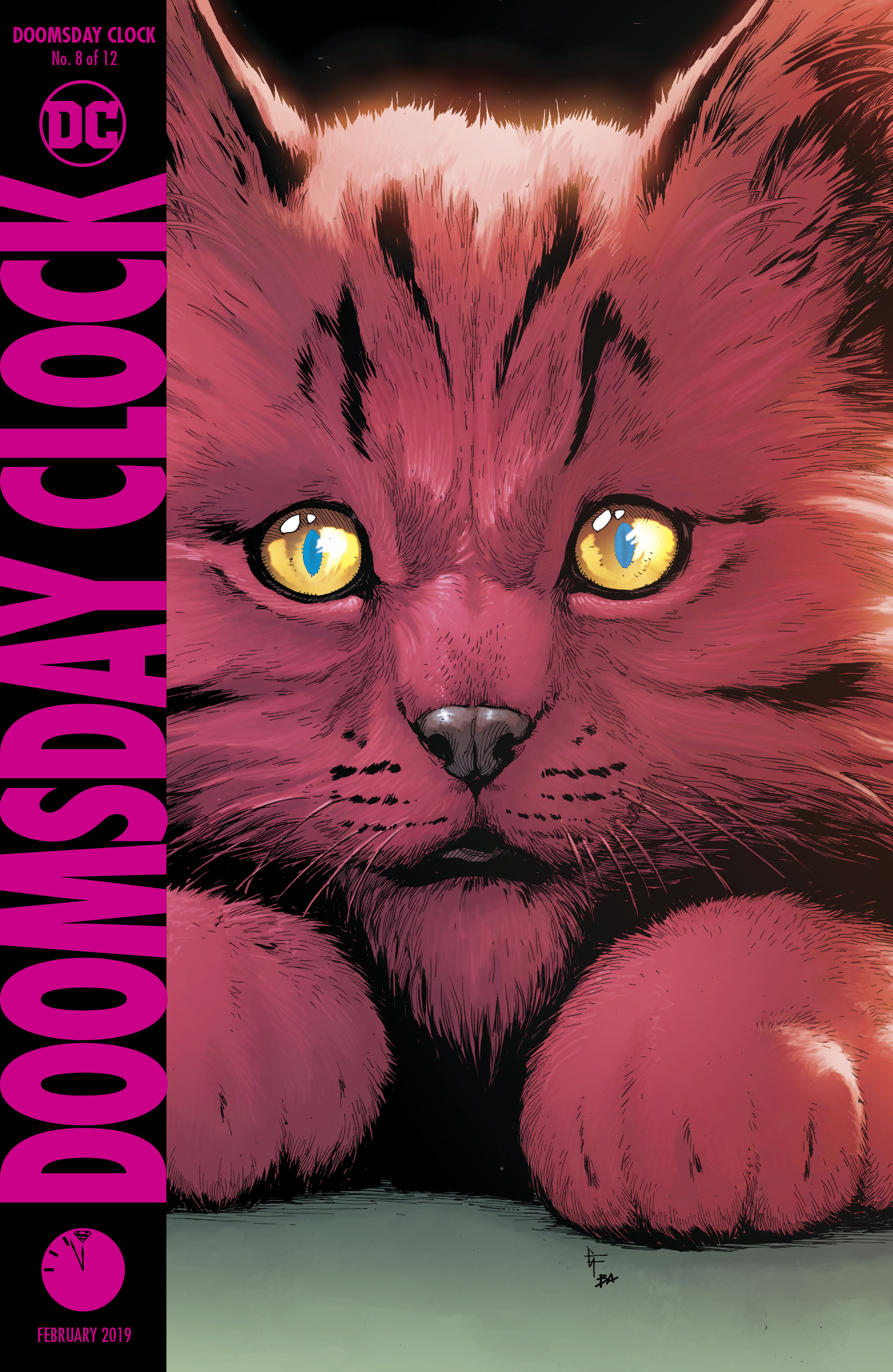 Overview: Superman tries to stop Russia declaring war against the United States, while Lois gets a mysterious envelope.

Synopsis (spoilers ahead): Ozymandias rejoices in finding a file, and shares this moment with Bubastis.

Tensions are high at the Daily Planet. The situation in Russia and the reactions to the Superman Theory have placed much pressure on the Daily Planet to uncover the truth. With Perry’s high expectations, Lois is already under a lot of stress; she definitely cannot deal with her desk ransacked. Frustratingly, she exclaims to Clark that someone went through her desk and stole some of her items. In the middle of their discussion, Perry asks the two of them where his story is. Over ninety-seven percent of the world’s metahumans are American born and he wants to know why. Lois reassures the chief this situation has her full, undivided attention. As she heads back to her desk, she notices a small, white envelope with her name on it.

From the tv, the newsroom is alerted to a breaking news situation. In Russia, there were hundreds of citizens gathered to protest Russia’s new metahuman laws. All children must now be tested at birth for the metagene. And seconds ago, the metahuman known as Firestorm illegally entered Russian airspace and attacked the heroes of Russia. He intensely denies the accusations of him being a US created metahuman. Clark tells Lois the truth; Firestorm is Ronnie Raymond and Professor Stein merged together. This happened after a nuclear accident. Perry asks who wants to go to Russia to cover this story — Clark and Lois immediately raise their hands.

In Russia, Firestorm fights with Pozhar and the other Russian metahumans. He accuses the Russians of ruining his life with these false accusations. After being blasted from the sky, Firestorm lands in a mob of angry citizens. They eagerly grab him, and he begs them to leave him alone. In a moment of uncontrolled rage, he screams for them to let go. At that moment, he releases pure energy. When the smoke fades, he sees he has converted all the citizens to glass. Horrified of his actions, he flees.

In Metropolis, people see a red streak fly away. They know Superman will take care of this. He is the only hope for peace in their time.

Superman flies to Kahndaq and meets with Black Adam. After pleasantries, Black Adam and Superman take a walk through the city. After some minor conversation, Adam acknowledges Superman is here for Firestorm. He assures Superman that Firestorm has not taken refuge here. Black Adam warns him he cannot trust the Russians nor the Americans. Superman responds Black Adam needs to stay within his own borders.

Lois, in her office, is on the phone with Clark. They discuss where Firestorm would have flown off to. Lois responds Firestorm is probably still in Russia. Lois and Clark end their conversation, and Lois picks up a little flash drive. Wondering who it came from, she plugs it into her computer. A 1941 newsreel plays, detailing that the Justice Society of America is the only solution to stop the war.

In Russia, Superman finds Firestorm in a deserted bunker, desperately trying to change a glass boy back to flesh and blood. Superman encourages Firestorm; he is able to change this boy. He only needs to concentrate. Firestorm tries again, and he is successful.

At Red Square, the Russian president addresses the world. He declares that humankind is at a violent crossroads. He cannot sit idly by as an American metahuman murdered his own citizens. He declares war against the United States.

Superman flies in and tells the president he is here to help. Firestorm only responded in fear. He can help reverse this situation. Superman tells the president he came from a world which was doomed because a group of people could not put their egos aside and talk things out. In a Batplane, Batman radios Superman — in a frequency range only he can hear — to stand down. He tells Superman to not pick a side. He must remain neutral. Superman declares the demonization of metahumans is wrong. In fact, the demonization of any group of people is wrong. Firestorm is not a villain; he can be part of the solution.

At that moment, Firestorm flies in and the Russian military immediately fires at him. Superman blocks the bullets, but some soldiers miss their mark and hit a glassed townsperson. Russia’s metahumans immediately attack Firestorm and Superman. The ongoing fight is breaking more glassed citizens. Firestorm, already traumatized, is pleading for the fight to stop. He can help. Russian tanks move in and run over more glassed citizens. Superman pushes one of these tanks away — an official act of violence against Russia. Firestorm is beginning to lose it. Superman goes to calm him, and Batman radios the energy readings are spiking. He yells it is not Firestorm. In a ball of blue light, Superman and Firestorm are disintegrated.

Ozymandias looks on and exclaims it has begun.

Analysis: To start off, this issue is good. I have no issues with the art or writing. From an academic perspective, Gary Frank and Geoff Johns wrote a near perfect issue.

I am confused why I should care about this story. What I mean is, who are these Russian metahumans? Doomsday Clock heavily features them, but I have no reference to who they are. It would be nice if they were introduced and talked about in current continuity. It would help me better attach to this story.

Alan Moore’s Watchmen was a meta-commentary on the Cold War. Doomsday Clock is a meta-commentary on fake news and disinformation. Today, this is a major problem. As long as anybody has a big following or platform, they can declare their own truth. It seems like this United States versus Russia conflict is rooted in lies and conspiracies.

When Firestorm screamed “let go” and turned everyone to glass, it made me think of the scene in Watchmen where Dr. Manhattan killed all the people in the television studio.

I am curious what more information Lois uncovers about the Justice Society of America. I am also curious why Ozymandias is happy.

Final Thoughts: Overall, it is a solid issue. It is a great story, though just not a home run.