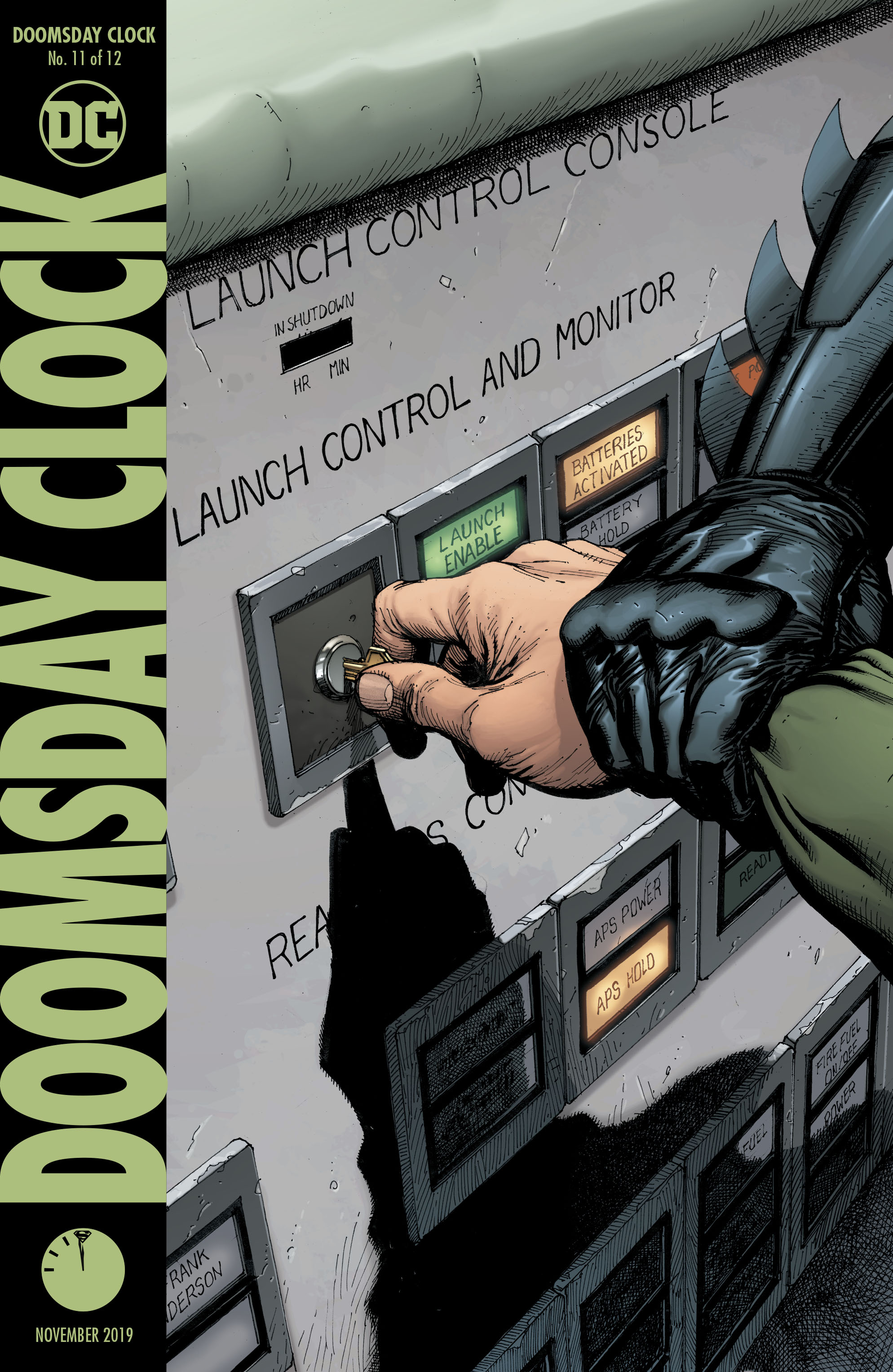 Overview: After losing all US heroes to the atmosphere of Mars, the Trinity is finally engaged in the global crisis. Meanwhile, Veidt reveals his plan to save his own reality.

Synopsis (spoilers ahead): This issue opens with Batman storming into a launch control room to stop US troops from deploying a missile just in the nick of time (later in the comic it is mentioned that the US nuclear systems are down. It remains unclear if this is a result of Batman’s actions). Meanwhile, back in Wayne Manor, Alfred is reading Rorschach’s Diary while he stands his watch before Bruce returns home. He reads the last page of it, the one that suggests that Adrian Veidt – Ozymandias – was responsible for the crisis back in 1985, Watchmen world, being thus suggested that the present crisis is also his responsibility. Out in the streets of Gotham, a war between Joker’s gang and Mime and Marionette has erupted and is taking over the city.

In the meantime – or maybe not, since it seems like it is daytime in this scene – Wonder Woman is still caught in a battle with the metahumans from Kahndaq. In Lexcorp, Lex Luthor is taking Lois to visit a chamber where he keeps the photograph of Jon Osterman with Janey Slater (the one Dr. Manhattan drops onto the surface of Mars in the original Watchmen). Except, Lex’s chamber has dozens of them stored. They are what he calls “chronal anomalies”. Meanwhile, in the Hall of Justice, a SWAT team comes smashing into Superman’s medical room demanding him to “come quietly” in the name of the president. He looks at the men and promptly flies away to go speak with the president himself. He does it calmly.

While the world falls into chaos – sudden weather changes, thunderstorms, political unrest all over the globe – Adrian Veidt watches it all. He is keeping both Saturn Girl and Johnny Thunder as prisoners. After his watch-man session, he stops by Saturn Girl’s cell to have a brief conversation with her – typical villain monologue, explaining his scheme to bring Mime and Marionette in as a way to dissuade Manhattan from acting against their group. It is also revealed that their son, whom Adrian used as a motivator for Mime and Marionette to come to this world, has actually always been in their own world. He was unknowingly adopted by Nite Owl and Silk Spectre.

From there, he stops making much sense and starts – and it is unclear why – to seem to have made a connection between Manhattan helping him save his own world and Manhattan confronting Superman. Wanting this conflict to happen, Veidt set into motion a plan for the popularity of metahumans to dwindle, which included the explosion in Russia involving Superman and Firestorm. Saturn Girl is still convinced that Superman will live – she’s seen the future, she knows it. Except, at this moment, she begins to dissolve from the material world, Thanos style.

Back in Gotham, Alfred bakes pancakes and takes them to Rorschach, offering some help. He refuses the help though. In another part of town, Mime and Marionette are wreaking havoc with Joker’s gang – and somehow the Comedian falls from the sky.

Superman, arriving on the grounds of the White House, meets the Kahndag group who’s been lead by Black Adam. From there, he’s suddenly punched through a wall, and suddenly he is in the middle of a city, and suddenly Manhattan is also there and they’re face-to-face.

Analysis: I have to confess, the only thing that made me grasp the timeline and events of this issue was writing the synopsis for this review. The deepest fears from everyone who’s been pointing out how problematic the delays of this title are have come true: we can no longer remember what in heavens is going on with each character. I had to read issue #11, then skim read #9 and #10, and then go back and read only the images and word balloons – skipping the additional text entirely – of #11 again to try to understand what was going on. And there are still some uncertainties left in my mind.

From all of this long, long journey that has been Doomsday Clock, this is without a single doubt the most confusing issue. With numerous – uncountable – backs-and-forths and time-jumps and perspective changes, it is barely possible to follow the story being told. It is entirely too much information, not only plot-wise but also graphic-wise. In fact, this is the first time that Gary Frank’s usually impeccable graphic storytelling is not enough to make the twists and turns easy to follow – the hero of the day, in this case, is Brad Anderson, who made sure to change either the hue of the light source whenever there was a change in location or timeline. This wouldn’t be as worrisome is this weren’t the last issue before the final one. It feels rushed and as if Geoff Johns were now chasing his own multiple artificial tails. All at once. Running faster and faster and getting nowhere. We’re not even close to any final conclusion than we were in issue #9. Not only that, it is now becoming clear that we’re merely revisiting a storyline much similar to Watchmen.

Adrian Veidt is a mastermind with a plan. Manhattan lets himself be used. There’s a bunch of people running around having no idea that they’re playing a part in Veidt’s plan. The big, big problem here is that Adrian’s plan seems… off. Brilliant evil genius he may be, but Veidt’s motivation for the fake alien attack in Watchmen was always clear and, one could even say, genuine. The problem with his plan was always the means to reach the end. Here, in Doomsday Clock, he reads more like an evil crazy mastermind. A bit more Joker, a bit less Lex, one could say. Slightly unlogical, with a maniacal smile while giving a villainous monologue, acknowledging that what he is doing is wrong. And, well, slightly mischaracterized. We’re now one issue – or should I say, one minute – away from the final conflict that is supposed to explain Rebirth and reshape DC’s universe once more. Let’s see what comes of it. My hopes, though, have dissolved together with Saturn Girl and the bright future of the Legion of Superheroes.

Final Thoughts: This clock is running late and its battery is overheating. While running to reach the conclusion of way too many storylines that have been left hanging for way too long, the storytellers seem to have lost their footing. If it wasn’t for the safety net (also known as Watchmen and its structured graphic storytelling) this issue would be lost to the deathtrap of a way-too-high, way-too-risky balancing act.