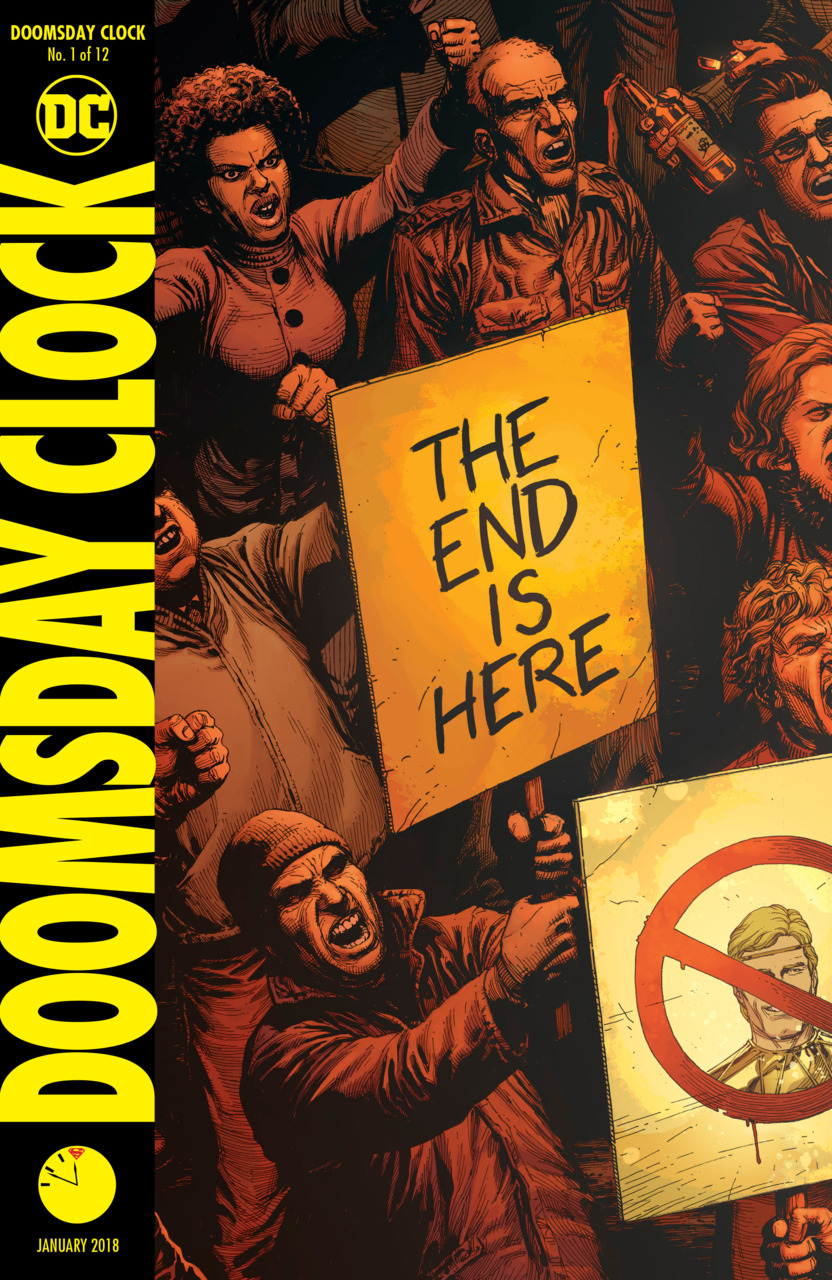 Overview: The world is on the brink of nuclear war and its only hope is to bring back God. Their God, Dr. Manhattan.

Synopsis (spoilers ahead): The story starts on the cover, which shows a mob protesting against Adrian Veidt, Ozymandias. The peace brought by his fake invasion is over. Society is split between the Undeplorables and the Totalitarians. One side screams to be heard but drowns itself in its own echo chamber. The other basks itself in nostalgia, demanding the return of the olden days. God abandoned this world.

The mob breaks the glass doors of Ozymandias’ old headquarters and invades it. A protester is shot dead in the same spot Adrian disposed of his attempted killer in The Watchmen. Meanwhile, a number of monitors are broadcasting different news, all of them bringing a sense of uncertainty to the future. The vice president has committed murder inside the White House, seventeen hostages are being kept with him, including Israeli prime minister, prompting a diplomatic crisis with Israel; the European Union collapsed and the Russian military is invading countries; North Korea’s nuclear power is advanced enough that they can reach anywhere in the US; the wall dividing Mexico and the US has been built, but it is now keeping the Americans out of Mexico as they flee from imminent doom. Meanwhile, the president is golfing.

It is revealed that Ozymandias’ invasion plan was brought to light and is now being called the New York City Massacre. The American government was accused of collusion, and Adrian declared the most-wanted man in the world. The news feeds start to mix with each other as special forces approaches Adrian’s arctic fortress. On his monitor wall, news feeds are now narrating the facts before the massacre, the events that take place in Watchmen. The squad enters Adrian’s abandoned fortress just as the news enter their final seconds as independent broadcasting channels: they will all become part of the National News Network and are saying their goodbyes. One of the anchors – Howard, his name should not be forgotten – stands up and, after shouting “Refuse to be silenced!”, is forcibly taken out off the air.

A x-ray scan of a head sits on a wall in one of Veidt’s rooms. Now all of Adrian’s monitors are showing the exact same image. A blond, white man, the American flag flying behind him, is speaking in the name of the President of the United States of America. This is an ultimatum: if Russia does not withdraw, the president will “launch the full force of our military might.” Meaning, a nuclear attack.

The prospect of nuclear war has the government issuing a mandatory evacuation for all major cities in the country. As the red zones are shown on screen and the population is told to contact local police, we are taken from Adrian’s televisions to a penitentiary in New York. The inmates are rebelling, wanting to escape the impending doom. An officer is grabbed by the collar and knocked out as he passes by the cells, but Rorschach appears and takes the keys from him.

Rorschach’s narration is guiding the events now, with a retelling how breakfast was ruined. As Rorschach unlocks cell 31, a number of other hands are also shown turning keys. They are placing their vote for launching a nuclear nuke. The countdown starts, the cell is unlocked.

Erika Manson, the Marionette, is the one locked inside. Rorschach wants her to follow, but Erika refuses. Last time they met, Rorschach promised to throw her down an elevator. But this is not the same person. To prove it, Rorschach takes out a glove, revealing a dark-skinned hand. Erika still refuses to go, but Rorschach uses her son as leverage.

He needs her help to find God. She won’t help unless they break her husband out, Marcos Maez.

Out of Erika’s cell, the inmates have managed to open the gates and are now running free in the prison. They get to the cell of the mute. Big guy, white streak of hair, just sitting on his cot. The inmates turn their rage on him. As Erika calls for him, they realize the mute is her husband and, as she says, “he likes to play the underdog.” The man comes to life, his violence is like a dance as he takes down all of the men that came after him. He declares, mimicking, that he won’t leave without his weapons. They are in lockup. They are imaginary.

The new-formed trio escapes prison and walks to Rorschach’s car, moved by gasoline in a world where all cars are electric. They head to Manhattan, no traffic to delay them. Everyone is fleeing the city. On foot, their way continues through the sewer system of the city. Their destination is Nite-Owl’s base of operations. Rorshach’s partner, though, is not Nite-Owl, but rather Ozymandias.

As Ozymandias proceeds to explain his plans to “find God”, he is taken by a sudden, sharp pain in his head. The x-rays were of him, he’s got cancer. Meanwhile, the NNN is broadcasting news that Russian forces continue their march on Poland, “despite what any foreign press may claim.” Their world is hopeless, but Adrian believes he knows how to fix it. They need to find Dr. Manhattan, they need to find Jon.

As the Manhattan of their world goes up in flames, we are shown Metropolis, the world where Jon has retreated to. Clark and Lois are in bed, asleep. Clark is dreaming of his prom night, how awkward he felt. His parents take him to prom and suffer a car accident on their way back home, the death of the Kents as it happened in the New 52. Clark wakes up as the car hits a tree, Lois calling his name desperately. He is floating over the bed, his screams shaking the room. Superman just had the first nightmare of his life.

Analysis:  There are no bigger shoes to fill in the DC Universe as those left by Dr. Manhattan back in 1986. The Watchmen was not only a masterpiece of imagination, plot and storytelling by Alan Moore and Dave Gibbons, it was groundbreaking literature. Without the political context of those years though, Watchmen would not be what it is.

In 1984, the Doomsday Clock had reached 3 minutes to midnight. We see the clock ticking in the pages of Watchmen. The tension of the Cold War had reached its highest point and fear of nuclear doom hovered over the western world. Alan Moore took the context from his time and turned it into a powerful allegory. The power of the atom turns human into a detached being, simply watching. Dr. Manhattan. Under the risk of taking a turn towards theories deeper than what befits the context, Watchmen can be said to be a true expression of its zeitgeist, Hegel’s. Hegel’s spirit of the time. I would dare go further and affirm it is befitting of its time kunstwollen, as theorized by Alois Rigel: the desire of art, the way art is an expression of the deepest desires of a given society in a certain time. Watchmen appealed to both the aesthetics and the overall thinking of its time.

The year is 2017 and we are now two and a half minutes to midnight. The time could not have been better to give Watchmen the heir it deserves.

The Bulletin of the Atomic Scientists, the watchmakers responsible for the Doomsday Clock, releases a Bulletin pointing out all of the dangers in the current world scenario that justifies the clock being the closest it has ever been to Midnight. Conflicts which again put the United States and Russia at odds; North Korea, a country with an unreliable government, conducting successful nuclear tests; climate change putting pressure on world leaders; nationalism on the rise all around the globe, coupled with an increased lack of confidence in the democratic system; the spread of fake news, and what they name “information monocultures” – the echo-chamber that social media produces. Those factors are shaping a catastrophic world scenario.

The world Geoff Johns and Gary Frank establish in the first pages of Doomsday Clock breathes with its own life as we easily see our own world in it. Protesters and mob becoming one and the same, police violence, contradictory media reports. Those pages are enough to make me feel like I know exactly what this Doomsday world is like. And maybe we do know.

In this, the creative team asserts their own identity, even if there is Watchmen stamped all over this book. Moore built his world slowly with the newsstand, the Black Freighter, and the use of the appendices at the end. Johns and Frank throw us into their world as fast as a speeding bullet, and lord help us, we are standing in the midst of its chaos, and we feel its despair. Maybe we don’t deserve the return of this God. Maybe we don’t deserve Gary Frank. His graphic storytelling for this book is seamless, fluid and gut-wrenching. Some sequences stand out in a way a well-directed long-take would in a movie. Or maybe a Tarantino bloody sequence. The Watchmen as drawn by Tarantino is what Frank pulls out here. If the Mime fighting scene is not enough to convince you of Gary Frank’s mastery, then I don’t know what could. I could also talk about how Rorschach walks with his upper body leaning forward, as if on a constant rush. Or the key-turning sequence, with the perfect way Gary conveys the moving of the hands. Or the walk in the sewers, as the Mime pulls his imaginary gun. But I’ll jump to the moment that sold me the whole concept of the Doomsday Clock. Clark Kent having a nightmare. Putting the Watchmen together with DC’s regular universe. The very idea of this sent waves and waves of clashing opinions through the comics world. Watchmen is sacred material to many people, it should not be touched, it should not be meddled with.

Clark Kent is having a nightmare. His screams are probably shaking the entire building. Despair has caught up with him. The simple fact that Superman’s first appearance in this book is him in a fragile moment, a psychological moment, transmits more instability than if it opened with him fighting Doomsday.

November 1992 marked the beginning of The Death of Superman, as he perished under the power of Doomsday. November 2017 might mark the time when classic superheroes will finally face their darker counterparts from the 80’s.

And just to throw some more eggs into the hunt that has already begun, I’ll give you this. Marionette and the Mime already existed before, but their genders are swapped. November 23, 1992, was the date when the play “Someone Who’ll Watch Over Me” opened at Booth NYC for 232 performances. The is an obituary in the final appendage of Byron Lewis. He was the Mothman, part of the Minutemen. His funeral is to be held at the Fitzgerald Metal Home, and Ella Fitzgerald has a recording of the song “Someone to Watch Over Me.”

So I ask you. Who watches the Watchmen?

Final Thoughts: With masterful storytelling and a perfect tone, Doomsday Clock has all of the potential to become the rightful heir to Watchmen.