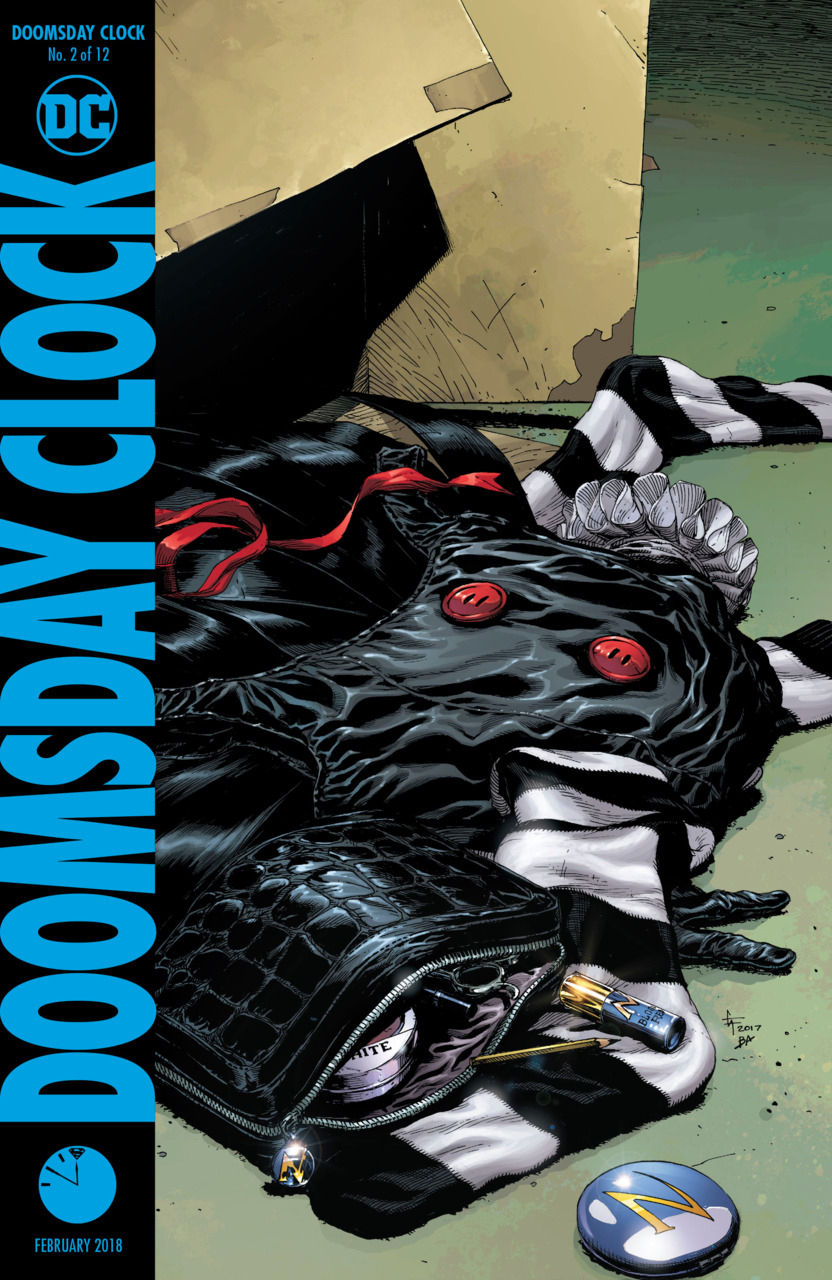 Overview: Rorschach, Ozymandias, the Mime and the Marionette manage to follow an electron trail left by Dr. Manhattan to the world he has escaped to.

Synopsis (spoilers ahead): The issue opens with a security camera feed of the one time Dr. Manhattan refrained from killing criminals caught red-handed. The spared ones were the Mime and the Marionette, back when she was pregnant with their child. As the feed plays, Ozymandias is working on Archie, the Owlship, to prepare it for interdimensional traveling based on quantum tunneling. The Mime and the Marionette are given their costumes back, to Rorscharch’s discontent. Ozymandias guarantees it is all part of the plan to get Dr. Manhattan to come back.

They manage to escape in the nick of time, just as a nuke hits New York. Meanwhile, in the DC Universe, Bruce Wayne is going through a protocol Rorschach test in Wayne Enterprises. And lying his guts out. After he finishes, Lucius comes to him to alert him to the possibility of Lex buying Wayne Enterprises.

A Supermen Theory has been going around, claiming the concentrations of metas in the US is the result of government experiments. The streets of Gotham are taken by a protest against Batman. The Batman is necessary, Bruce says. The Batman is no longer wanted, Lucius counter-argues. At this moment, Archie comes through the Gotham skies and crashes at Amusement Mile.

In order to continue with their mission, Ozymandias and Rorschach leave the Mime and the Marionette handcuffed to the Owlship as they go out exploring. Both more advanced and more outdated, the world they find is eerily similar to their own. To get acquainted with it, they make Gotham City Public Library their first stop. Standing on the frontispiece are the busts of Ernest Hemingway, Virginia Woolf and Vladimir Mayakovsky.

There, Ozymandias finds that one of the main differences between his and this world is the sheer amount of masked people running around, and, worst, many of them with superhuman powers. To help them find Jon, they decide to try to enlist the two smartest people on the planet: Bruce Wayne and Lex Luthor.

In the Manor, Rorschach helps himself to Bruce’s breakfast, left for him by Alfred. A wind gust coming from a wall blows the aluminum foil Rorschach left on the floor, raising his suspicion. He realizes it must have come from behind the grandfather clock, and so he pushes it out of the way. Descending into the Batcave, Rorschach activates one of Bruce’s silent alarms.

Meanwhile, Luthor enters his office to find Ozymandias, standing in front of a painting on his wall: Léon Bonnat’s La Lutte de Jacob, depicting Jacob wrestling with an angel. Lex threatens to call security on him, but gives Ozymandias time to explain his intentions. Ozymandias offers a partnership based on their shared ambitions.

Analysis: Doomsday Clock plays like a well-orchestrated symphony. A score of dualities, of two worlds running in parallel and then colliding. A symphony where the soloist is playing mute, hiding himself as the tempo fastens in an ever increasing build up. Geoff Johns and Gary Frank continue working on such syntony that it is hard to tell who is the conductor. Maybe it is both of them.

When led by a more mature conductor, an orchestra will achieve a better result. Johns here is proving that he is reaching his maturity as a writer. His work has been recognized before, him probably being one of the most well-rounded authors currently working for DC, but the depth he is adding to Doomsday Clock is that of a master. He knows every corner of his sandbox. You know a fantasy writer is good when the world builds itself naturally around the characters through small details such as name-dropping, inside jokes, pieces of news. No telling, not necessarily showing either, the world is there and it will be shown to the reader as the characters move along the plot. J.K. Rowling and George R. R. Martin are some of the finest examples of such techniques, and Johns is now climbing to that level.

No detail is added to this book without it having a meaning. It is in those details that Frank and Johns act as one single force.

There are three levels of symbology in Doomsday Clock: the easter eggs left there as reference to DC in general, the panel-narration synchronized tempo, and the details which are there to give a three-dimensional feeling to the universe. There are multiple examples of all three of them, but to give them all away is to privy the reader of the research experience that comes from trying to put those pieces together.

The easter eggs appear as, for example, a man looks up to the sky as the nuke falls on New York and shouts “Is that a plane?” The second kind is probably the biggest symptom of how this entire book was thoroughly thought through. It happens multiple times, and I’ve come to eagerly expect them. The third and last level is the one that makes Doomsday Clock stand out from the crowd, head and shoulders and even a little of its torso. Background symbology.

It is Dr. Manhattan meeting the Mime for the first time and unconsciously recreating the Creazione di Adamo by Michelangelo. As Marionette, or Eve, steps in front of him, it is the gift of life being created in her womb that stops Manhattan from killing them.

It is Lex Luthor having Léon Bonnat’s La Lute de Jacob on his office wall, portraying Jacob wrestling an Angel who, depending on the interpretation of the book of Genesis, might also be God. Jacob prevails, and his name is therefore changed to Israel.

It is the frontispiece of Gotham City Library having the busts of two men and one woman, coinciding with DC’s Trinity. Three writers, all three of them having ended their own lives. A symbol of American literature, Ernest Hemingway. One of the main feminist writers, Virginia Woolf. One of the biggest names in Russia’s Futurist avant-garde, who wrote a book with his outsider observations about America when he journeyed the continent, and, despite his clashing political views, saw in the US much of what he would like to see in the future of mankind. The parallels are, once again, not to be dismissed. While most of this issue is the result of a conjunct effort, Gary Frank also shines on his own field, much in the same way Johns shines with the subtlety of his world building. The storytelling provided by Frank is on a level that few artists will ever achieve. Beyond being able to pull off a mute character by only playing with his facial expressions and body language, he does not need narration to guide us through a scene, the biggest example being Rorschach in Bruce’s study.

The entire scene is silent, as it should be. We don’t have to be told that Rorschach just saw the aluminum foil move with a wind that is coming from a wall, Gary is showing us all of it. The camera turning to follow his point of view is as cinematographic as it gets. And then, to further reinforce his suspicions, he lights a match. No sound effect, just a matchbox and fire and we know that Rorschach just lighted that match. And the wind effect on the fire is what tells him where to find the opening behind the clock. Brilliant, stunning visual storytelling. Final Thoughts: As the symphony of doom continues, Gary Frank and Geoff Johns conduct the instruments provided by the DC mythology and the  Watchmen with mastery. A fine example of world-building coupled with stunning storytelling makes the second issue of Doomsday Clock continue on the level that the first issue set as the plot moves forward in a natural pace.