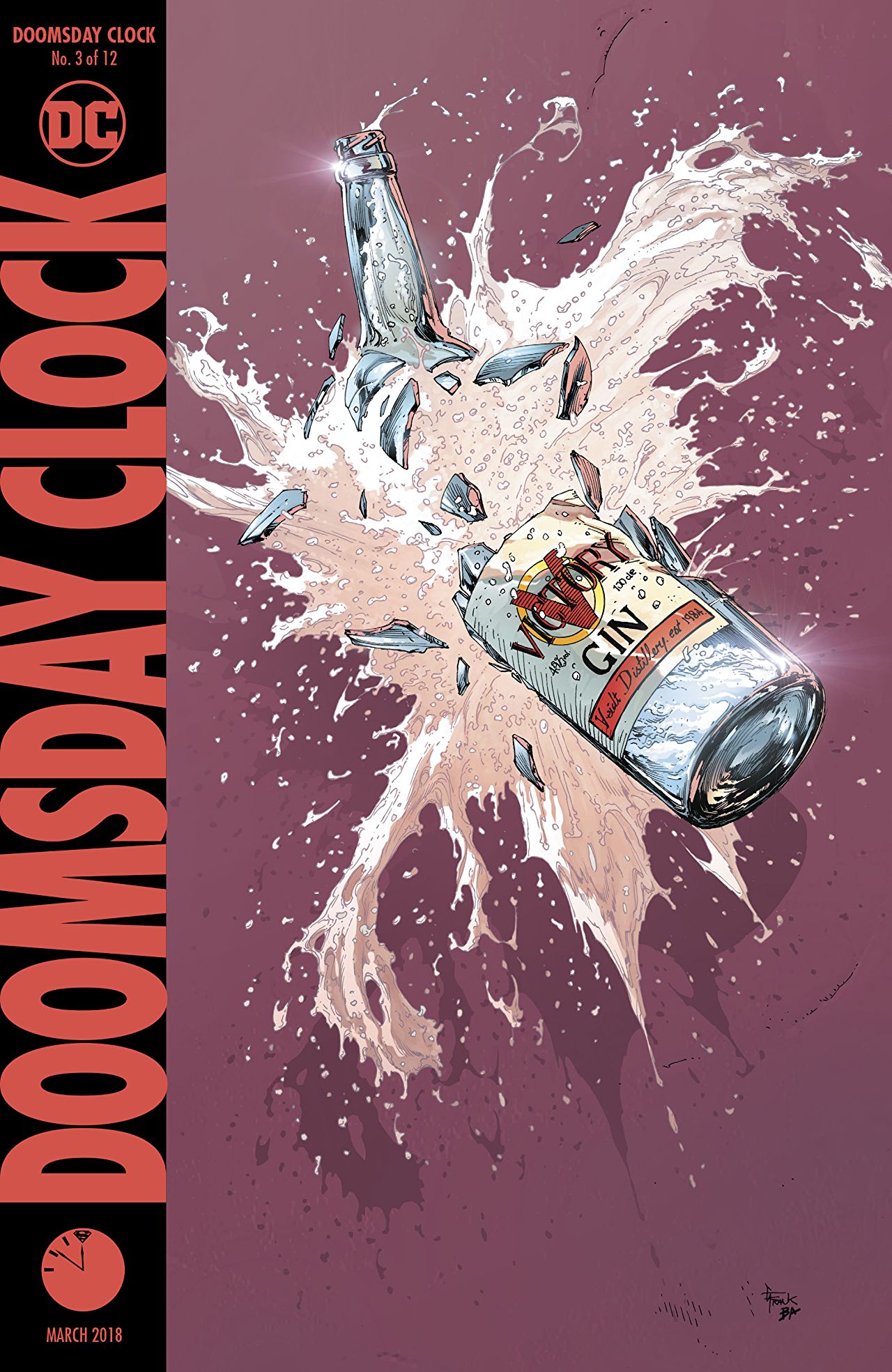 Overview: Led by the tale of Nathaniel Dusk, we follow the Mime and the Marionette as they finally get to play, and the Comedian and Ozymandias go for a second round. Meanwhile, Batman gets to read Kovacs’ journal.

Synopsis (spoilers ahead): The issue opens with the Watchmen fight between the Comedian and Ozymandias, but this time a tweak in the camera allows us to see Ozymandias’ face. Sidewalk fastly approaching, the Comedian falls in the ocean instead. Dr. Manhattan has zapped him away from his universe.

Back in the present, the scene replays itself, this time in Luthor’s office. As the fight escalates, the Comedian shoots against Ozymandias, who deflects the bullets, letting them hit the glass pane behind him until it crackles. Throwing himself against it, Ozymandias escapes to a free fall. He manages to acrobat his way to a non-fatal fall, but still loses conscience due to the impact.

Meanwhile, in the Batcave, Batman questions Rorschach, who tells him that he is searching for help. Failing to explain his intentions in an intelligible way, he hands Kovacs’ journal to Batman, who seems genuinely intrigued by the situation. Rorschach stands beside Batman as he starts reading it, but quickly becomes impatient. Batman sends him upstairs to clean up and get some rest.

Out in Amusement Mile, the Mime and the Marionette escape Archie, the Owl Ship. They realize they are not in Jersey or New York anymore, and so they go out in search for a drink.

We’re then taken to a new setting, the elderly home where Johnny Thunder is living. He is by the window, waiting for his granddaughter and her son to come by and take him out for the night. In the background, some of his companions are arguing over what to watch on television. A News Channel is on, giving the updates on the Supermen Theory, but Mr. Donald takes control of the television and changes the channel to watch a Carver Colman classic noir, The Adjournment. It is the actor’s last film, when he played Nathaniel Dusk, Private Investigator.

The movie starts playing, as Nathaniel Dusk talks about his life and his losses. It is Christmas Eve. He is having a drink in his office, but his business is closed for the day. Even so, he sees a silhouette of a man coming to his door

In Wayne Manor, Alfred is showing Rorschach to a guest room. He asks Alfred for some more pancakes. As the butler leaves him, Rorschach takes off his mask. He goes into the shower, all the while thinking how out of place he feels. Big house, big room, a bathroom covered in marble. He is feeling dirty, guilty, having shaken hands with Veidt even after what he has done.

The movie is back on. Two men are dead on the floor, chess pieces scattered around them. Nathaniel Dusk is searching for clues on the crime scene. In real life, the remote control is taken from Mr. Donald and the channel is changed back to the news channel, now covering a lab explosion in Berlin. The news cuts to a coverage of the attack in Luthor’s headquarters, saying his “attacker remains in serious but stable condition.”

We’re then back with the Mime and the Marionette, who enter one of the bars under Joker’s protection. As the Marionette exclaims “Who’s the Joker?”, a man grabs her for disrespecting the clown. This leads to a deadly bar fight, and the Mime finally pulls the trigger of his mimic gun.

As Johnny Thunder waits by the window, the remote control is still under dispute and the movie is back on. Nathaniel stops by his late wife’s apartment where all that’s left of her is a Christmas present still wrapped.

In Wayne Manor, Rorschach wakes up screaming from a nightmare about the fake alien invader. He was on his way to his parents’ home on that night. They died, but he survived to have the nightmares provided by the alien monster designed by Veidt. Bruce is sitting by his side as he gets up and tells him he knows where to find Dr. Manhattan: Arkham Asylum.

Analysis: Carver Colman plays Nathaniel Dusk, Private Investigator. A widowed man, living a life that he’s no longer sure has meaning. He is called to help investigate a double homicide case. Two men had been playing chess when they were killer. One died with a clean shot to the head, the other had a hole blown on his cheek, blood messily flowing out of his mouth. Before he starts the proper investigation, Nathaniel Dusk stops by his old home. His late wife died shortly before Christmas and left him a gift, one he had not opened. All that is left of her.

Dusk’s story will surely unfold as we move along Doomsday Clock,  guiding our way through the plot as much as The Tales of the Black Freighter did in Watchmen. Much like the pirate tale, there are certain connections between the story being told and the plot itself. Two men are playing chess and get killed, taken down. Chess puts two people against each other, using black and white pieces. Much like Rorschach, who is taken out of the game by Batman, and Ozymandias, who gets grazed on the forehead by a shot fired by the Comedian, and who is also out of commission by the end of the issue. There is also the package, the only thing left from a deceased person, not unlike Kovacs’ journal, the one connection the current Rorschach has to his predecessor.

Mind you, The Adjournment is not only an important piece in the structure of storytelling, it also makes for some of the most beautifully executed pages in the entire issue. The movie is in black and white, but the depth that Gary Frank and Brad Anderson manage to give to those panels make them jump out of the page. The light shining on Nathaniel’s face through the window makes the panel actually look as if it were playing on a television screen. This effect was very probably added digitally over Frank’s lines, proving that a colorist is not there only to add color to art. Colorists are often the ones to set the mood of a comic, and Brad Anderson excels multiple times in Doomsday Clock. Much like most everything in Doomsday Clock, there is another layer to Nathaniel Dusk. In the real world, our world, Nathaniel Dusk is a comic book by Don McGregor and Gene Colan published in 1984 by DC Comics. It is, in a way, an adapted media inside the plot, as well as a retake on a tool used by Alan Moore and Dave Gibbons in Watchmen. There are layers upon layers in everything when it comes to Doomsday Clock, but they all feel like they have meaning, but those will probably only start to come to light by the second half of the story. Johns went for a slow-paced plot, and he is playing it wonderfully.

The Adjournment and its underlying meanings are just a side dish, though. The main plot is, at this moment, close to having too many flavors. This issue had to follow nothing less than four parallel settings, plus the movie, the news channel and an opening scene to justify the Comedian not being dead. Frank and Johns are juggling and jumping and walking a tightrope all at the same time, but they make it work most of the time. The moments when the narration got a bit overwhelming were majorly due to the back and forth and back again of the television. It was chaotic and it was meant to be chaotic, but Johnny Thunder had to share his screen time with that background noise. Despite the caretaker being there to comment on the time, the altercation made it all feel like a ten minute dispute for control of the television, and so the feeling of time passing as Johnny waited and waited for his granddaughter who will likely never come got watered down. The bitter taste of loneliness is there, but chaos overwhelmed it with its strong flavor. While the Elderly Home does not strike all of the right notes, the bar scene is a perfect display of well-choreographed violence with stunning camera work. The Mime and the Marionette continue being one of the best elements in Doomsday Clock, and it came as a genuine surprise to see the Mime giving a full display of his abilities. To add a final, brilliant touch, Frank solves the problem of showing a man losing his eyes with a stroke of artist genius: an actual brush stroke. Black on red, more violent than any realistic representation could ever be. Creative problem-solving is inherent to a good artist, no matter the field, and Frank continues to prove his skills. Just as a final note, the plot twist at the end of the issue will probably satisfy most who enjoy the detective side of Batman, as he uses his wit instead of his fists for once. World’s Greatest Detective indeed.

Final Thoughts: With some new layers and new characters presented, Geoff Johns and Gary Frank are finding their balance on the edge of the plot becoming overcrowded. Yet, with a genuinely well conducted plot and continuously brilliant storytelling, they manage to guide the reader through the twists and turns of the story.