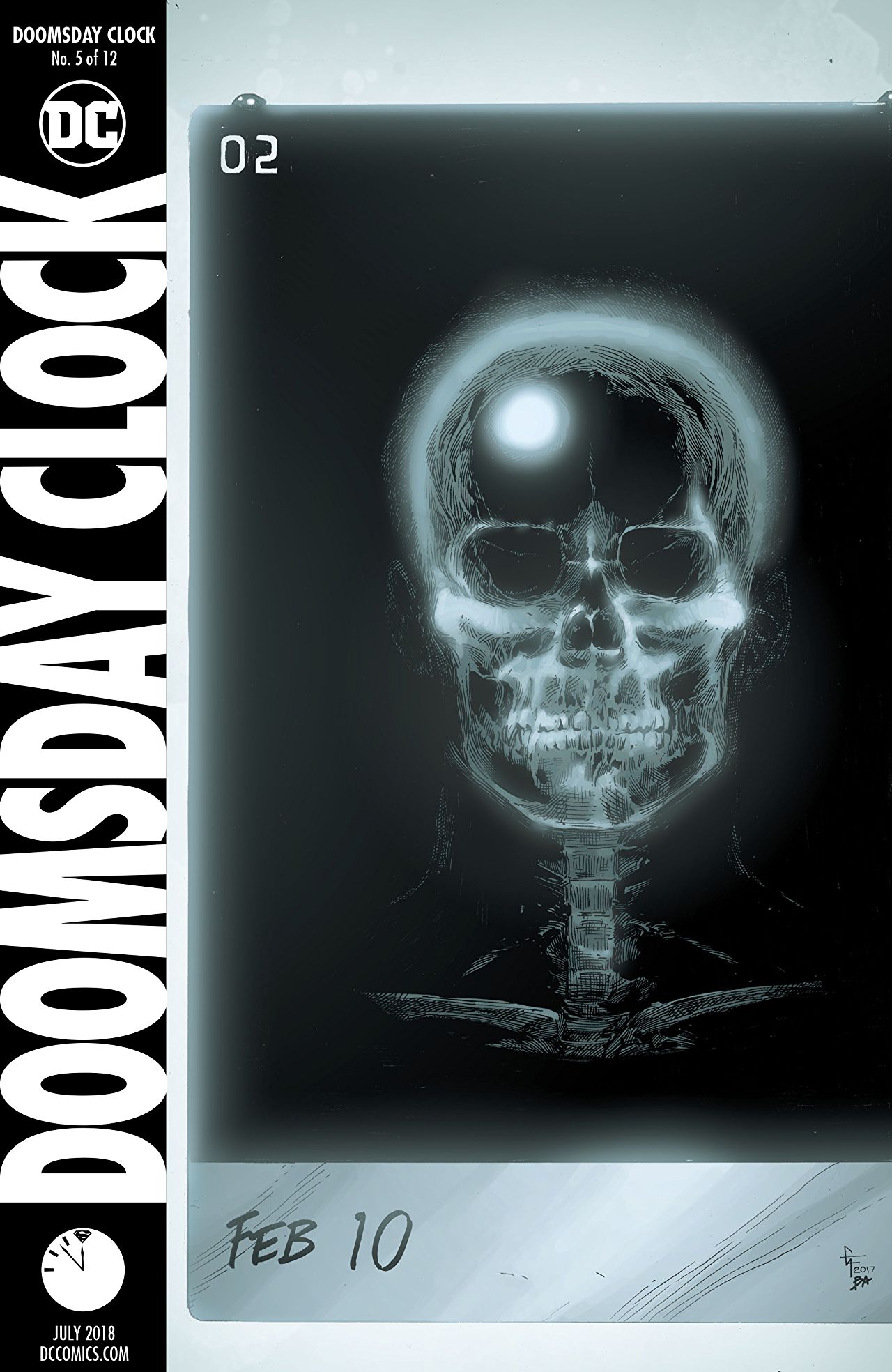 Overview: All of the chess pieces continue to move in the board of Doomsday Clock, and some fates start to meet.

Synopsis (spoilers ahead): After having fallen from Luthor’s office, Ozymandias finds himself in a hospital room, cuffed to his gurney as a doctor examines him, two policemen standing guard as she does so. It is suggested that he might be cured of his brain tumor. After he’s left alone, Ozymandias wastes no time in coming up with and executing a plan to escape the hospital. First, he fools the policemen. Then, he takes the van belonging to the Metahuman Animal Services that would be transporting Bubastis and Ozymandias’ costume out of the hospital. Meanwhile, Hawk and Dove get arrested after acting up against terrorists in Russian territory, an act seen as interference in international affairs.

At the Daily Planet, Lois and Perry are arguing over the headline of her report on the Lex Luthor assault. She wrote “Assassin attacks Lex Luthor”, Perry changed it to “Metahuman Assassin attacks Lex Luthor”. He claims to be only playing along with public opinion, making Lois storm out of his office. She finds the Planet’s staff all watching a pronouncement by Pozhar, a Russian metahuman who looks to be on fire. His origin, he says, was an accident in Ukraine. He announces that, after the Hawk and Dove incident, Russia will be closing its borders to all foreigners.

In Gotham, Rorschach and Saturn Girl invade a thrift shop to get her some clothes. Both of them have retrieved their personal belongings that had been stored away when they got arrested. His, a fork, a watch and his mask. Hers, the Legion ring. They walk out of the shop fully clothed and ready to go find Manhattan.

The pronouncement by the government of Russia continues, revealing a coalition with Markovia and declaration for a metahuman arms race in disguise. The people living in the elderly home are watching it, but not Donald or Johnny Thunder. Donald is in his room, watching Nathaniel Dusk movies. Johnny, however, has fled. He is trying to get to the All American Steel Factory after a green flame consumed the entirety of it. Not having enough money for a train, he catches a bus to Pittsburgh, where the factory is located.

Ozymandias, after his escape from the hospital, drives himself back to the Owl Ship, crashed at Amusement Mile. Inside it, Batman is waiting for him. Nearby, at the crime scene left behind by the Mime and the Marionette, the Comedian is found snooping around by two policemen. They let him go after he threatens to kill them should they retain him.

The Mime and the Marionette, meanwhile, are following the trail of the Joker tattoo in order to get to him. In an alley, after killing a number of Joker’s men, the couple interrogates the last one. He has no idea where the Joker is, but he says there is a plan involving the bat-signal that night.

Back in the Owlship, Batman and Ozymandias get surrounded by the police, but they raise flight towards the GCPD, where protesters are marching calling for the arrest of Batman. On the television, news reports are showing the repercussion of the Russian pronouncement, and footage of Black Adam decapitating a terrorist about to kill an American citizen.

In Metropolis, while she waits to see Luthor, Lois watches a live pronouncement by her father, Sam Lane, on the withdrawal of American troops from the middle east after an incident involving an American soldier who, wearing a Superman armband, opened fire on protesters in Qurac. As she enters Luthor’s room, Lois starts questioning him about his involvement with the Supermen theory. He denies involvement and even admits to making his own investigations about the subject. Up in the skies, Superman is watching the conversation unfold.

In Pittsburgh, Johnny Thunder arrives at his destination. It is night, and he meets with a small gang who is robbing the ruins of All American Steel Factory. Meanwhile, in Gotham, Ozymandias and Batman head down to the GCPD, where the manifestations are happening.

Analysis: Besides being an excuse to join the Watchmen with the main DC Universe, the other main motive for Doomsday Clock to exist is to explain the distortion of time in the universe. Time, in this issue, was the builder and the breaker of the narrative.

Tempus is the name of the dead man. Time in Latin. Time has been killed, but the old accountant is not the murderer despite many facts that might make him a suspect. The Nathaniel Dusk movies are for Doomsday Clock what the Tales of the Black Freighter were for Watchmen. Considering how close this narrative is to Johnny Thunder’s, this might well be telling us that he had nothing to do with the time that was lost, despite that he himself believes his involvement. Time, for Doomsday Clock, is of the essence. And Gary Frank is excelling in conveying the passing of time.

There are a number of small hints to the how fast an action was, or how slow, or how long it took. All showing, no telling. In the hospital scene, the background talk is key to show how fast Ozymandias comes up with a plan and puts it into action. It is chit-chat between coworkers, no more than five minutes worth of conversation, but it is enough for the most brilliant brain of the world to escape his cuffs. The solution used by Rob Leigh for the off-panel conversation is also highly efficient with how little variation he’s allowed himself to use for this title. In fact, it is the close to no variation that makes the simple suppression of one line in the balloon speak volumes.

With the number of different scenes, different characters and the constant back-and-forth happening in this issue, those small solutions are key to keep the narrative tied together. That and the visual cues used by Gary Frank when changing locations. The bat-signal at the end of a page turns into the Bat symbol on Batman’s chest once you turn it, and so the narrative flows seamlessly. Except for the one scene that breaks the narrative. The Comedian walks into a bar, what does he order?

The Mime and the Marionette killed Joker’s henchmen in issue #3. The issue ended with Rorschach being locked up in Arkham. Following that, issue #4 was exclusively focused on him reminiscing about his trauma. And then he escapes, joined by Saturn Girl. Except, if we consider this scene with the Comedian, the entirety of issue #4 plus their incursion to a thrift shop happened in the space of a couple of hours at most, since he finds the bodies left behind by the Mime and the Marionette still unguarded by the police, still at the same place they fell. Was Rorschach then only locked up for one hour or is Alastair Tempus being killed all over again?

Time, despite it being the motivation for Doomsday Clock, is not the main theme for this issue though. If there ever was a crisis in DC built with bricks much similar to real-world crises, than Doomsday Clock is the one. Political polarization, diverging worldviews that are no longer open to dialogue, and international tension building up. Those are symptoms common to historical wars, specially the World Wars. These are the symptoms we’ve been living in the past few years in our world. All of those symptoms are the same, except this is a different world. Instead of a nuclear arms race, the countries are caught in a metahuman arms race. Mainly the USA and Russia, or at least this is what we’re led to believe from the information the characters in Doomsday Clock are being fed with. Pozhar here is symbolic because his origin is in some way similar to that of Doctor Manhattan. Disintegrated in a nuclear disaster, he later reconstituted in his current form. The other side of the crisis coin is the contrasting viewpoints, and those are more clearly expressed in a conversation between Batman and Ozymandias. Batman accuses Ozymandias of manipulating the worldview, of creating a false crisis so that he could play hero. This is no news, but this narrative is much similar to the conspiracy theories surrounding the 9/11 attacks. To counteract this, Ozymandias points out how the DC Universe is lost to the simplistic notion of good versus bad, and how it makes people become self-righteous. Pure entertainment. There is some danger in this statement that has me on the edge of my seat. This is a not-so-veiled criticism of the traditional superhero/supervillain narrative, inside a superhero comic. This is Johns saying that the purism of good versus evil gets tiresome, and on this, I couldn’t agree more. This is coming from Ozymandias’ mouth though, and even if he’s not strictly a villain, he’s no hero as well. Be that as it may, this declaration makes one wonder where Doomsday Clock is taking us next, and whether or not it will bring changes to the DC Universe as a whole.

Final Thoughts: After an introspective issue, Doomsday Clock comes back full force putting all of the engines to work. Filled with political undertones and parallels with the real world, this issue moves the narrative forward, sending the characters on a collision course with each other.