Review: Batman and the Signal #1 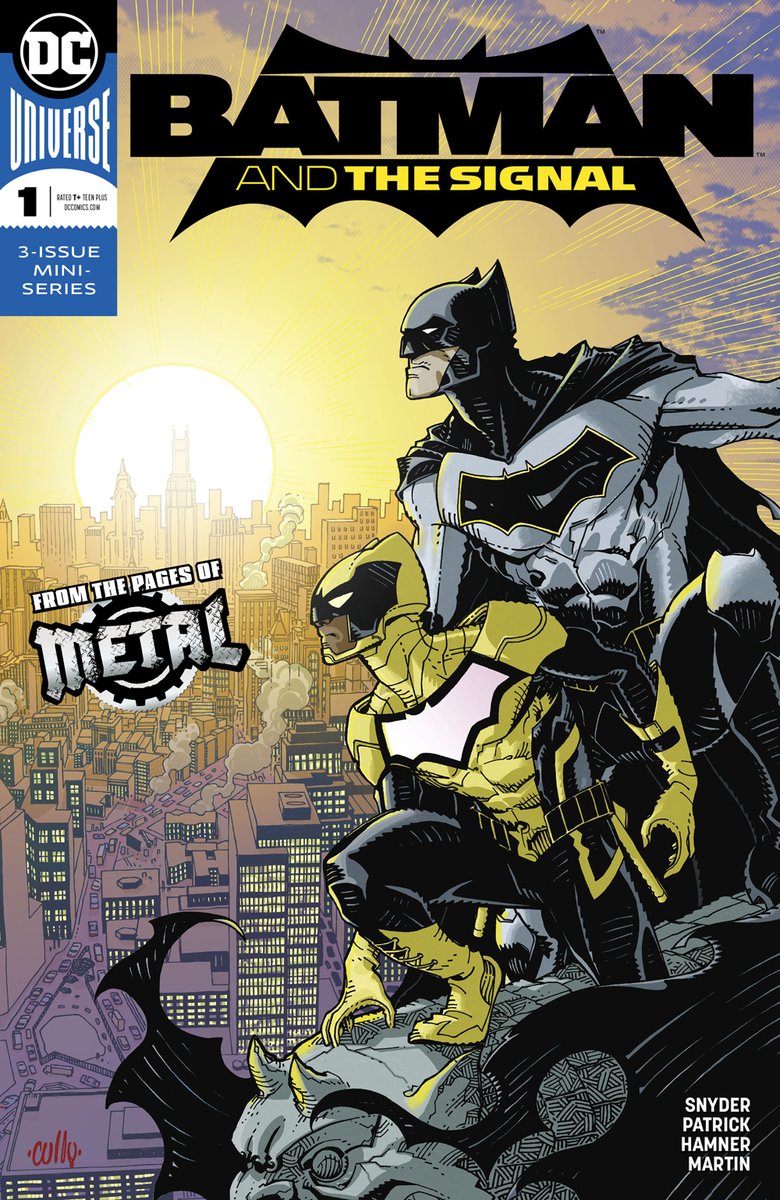 Synopsis (spoilers ahead): Duke is having a dream where he is sitting at the breakfast table in Wayne Manor with the entire Bat-Family and getting a rather lukewarm reception. He internally reflects on his doubts about being the Signal as well as his concerns about being a metahuman. Later in the morning, Duke stops an attack on a bus by a metahuman asking Duke if he’s “on the dial”. The metahuman is calling himself the Null, but Duke doesn’t know what he’s talking about. Null demands that Duke show him his powers but Duke doesn’t understand how to use them yet. Duke eventually gets his powers to work during the fight and subdues Null. Null asks Duke if he’s the Dial’s center before getting knocked out. The people on the street react negatively to the presence of a superhero during the day time and Duke leaves.

Elsewhere, in her apartment in Gotham Proper, Detective Aisi is on a phone call with her informant to try and get them to investigate metahuman kids in the Narrows. The detective is then paid a visit by Commissioner Gordon. Gordon has brought her a case file about kids in the narrows who went to a party, woke up in the morning with metahuman powers and then had their bodies shutdown as a result. Gordon has brought the case to Aisi because she has a personal connection to the case which led her to transfer from the night shift to the daytime shift. She accepts the case and mentions that this has happened before.

Back in the Narrows, Duke is at his older cousin’s place analyzing blood samples he took from Null. He’s not alone as he’s accompanied by his friend Riko Sheridan and girlfriend Isabella Ortiz. Duke’s cousin Jay stops by, but Duke is quickly distracted by Riko’s discovery that Null was stronger when he was closer to Duke.

The story flashes back for a second so Duke can explain how everything started. Duke gets a text from Bruce saying to meet at the Fox Center at dawn. Duke follows the instructions in the text to access a secret base in the center where he sees Batman. Batman says it’s called the Hatch and it’s Duke’s personal base. Batman shows Duke his modified armor and explains that there is something growing in Gotham in the daytime and that he needs someone to be the daytime protector. Duke decides on the codename “Signal” in honor of his mother.

Back at Jay’s house, Isabella suggests that Duke should go to the juvenile Arkham to see if any other people react to his biology. Meanwhile, Detective Aisi shows up for her morning shift and reads the toxicology reports on the dead kids. She notices an interesting point about water and decides to visit the juvenile detention center herself. She is denied entry by the receptionist and says she will return with a warrant. Duke arrives a little later and uses his powers to discover what transpired earlier. He’s able to discover the codes to the elevators and gains access to the detention level. He discovers all the cells are empty and there is a voice over the PA system that tells him it’s a trap right before Null and two other metahumans attack Duke.

Analysis: This issue is the first time Duke Thomas is being featured in a Bat-Book. There was the We Are Robin series during the New 52 era, but that felt more like a Gotham book than a Bat-Book. Right from the first page Duke addresses the reservations that many readers have about the character. Using self deprecating humor to connect Duke’s fears to things that some of the readers might be concerned about is a very smart move to get those people to give the character a chance. You can’t help but notice that the Bat-Family has become more diverse and this should allow for new and different stories to be told.

It’s really hard to project how a character will develop based on one issue, but there are some interesting concepts introduced here. The most interesting part for me was the interaction between Duke and Batman in the Hatch. Batman has promised that Duke is not going to be a Robin, but will instead function as a full partner. Allowing him to have his freedom and to operate with autonomy in his own base is a great first step. I really like the idea of Duke offering Batman a unique perspective on the city. As a person of color who lives in the Narrows it only makes sense that Duke might be able to address issues in ways that Batman cannot. I was hoping that this mini-series might draw inspiration from Batman #44 from the New 52 era, except with Duke investigating cases in the Narrows. While this issue doesn’t tackle such weighty themes right away, it’s only the start of a mini-series that could potentially lead to more stories down the road.

What we do get is Duke investigating the origins of his powers as well as other metahumans in Gotham City. The foundations for the story are well laid here. We get enough information to get the lay of the land while enough is left as a mystery to keep the reader interested. Duke also has a supporting cast around him in Isabella and Riko from the We Are Robin days that help connect this story with the Duke related stories that have come before. It will be interesting to see if he switches from working with them in Jay’s house to working with them in the Hatch. Bringing in some of his old team to assist him in the Hatch would be an interesting dynamic to explore. Detective Aisi’s connection to events is also only hinted at here, but I have a feeling she will become the Gordon to Duke’s Batman on the day shift.

I have mixed feelings on the art in this issue. I really enjoyed some of the panels, particularly in the action sequences, but some of the panels in the quieter moments didn’t feel as consistent to me. Duke’s fight with Null was simple but effective and there are those great panels of his eyes burning with focus and determination. This issue is brighter than your typical Bat-Book which makes sense since Duke’s primary color is yellow and the entire issue takes place during the day. It can be a bit jarring at first, but it’s very easy to enjoy once you become acclimated to it. I like Duke’s new costume design, but I think the yellow could be slightly more subdued. I’m still not a fan of the name “Signal” despite Duke’s explanation for why he chose it.

Final Thoughts: This is a steady start to a mini-series dedicated to exploring the mystery of Duke’s powers as well as the presence of other metahumans in Gotham. If you are like me and want to see Duke’s character developed further, as well as explore what Gotham would be like during the day, this book is definitely for you. I hope we get more stories that build this character’s history and present after this mini-series is over. Just as Nightwing has Bludhaven and Batgirl has Burnside, it would be great if Duke gets his own area of Gotham, but still interacted with the rest of the Bat-Family.