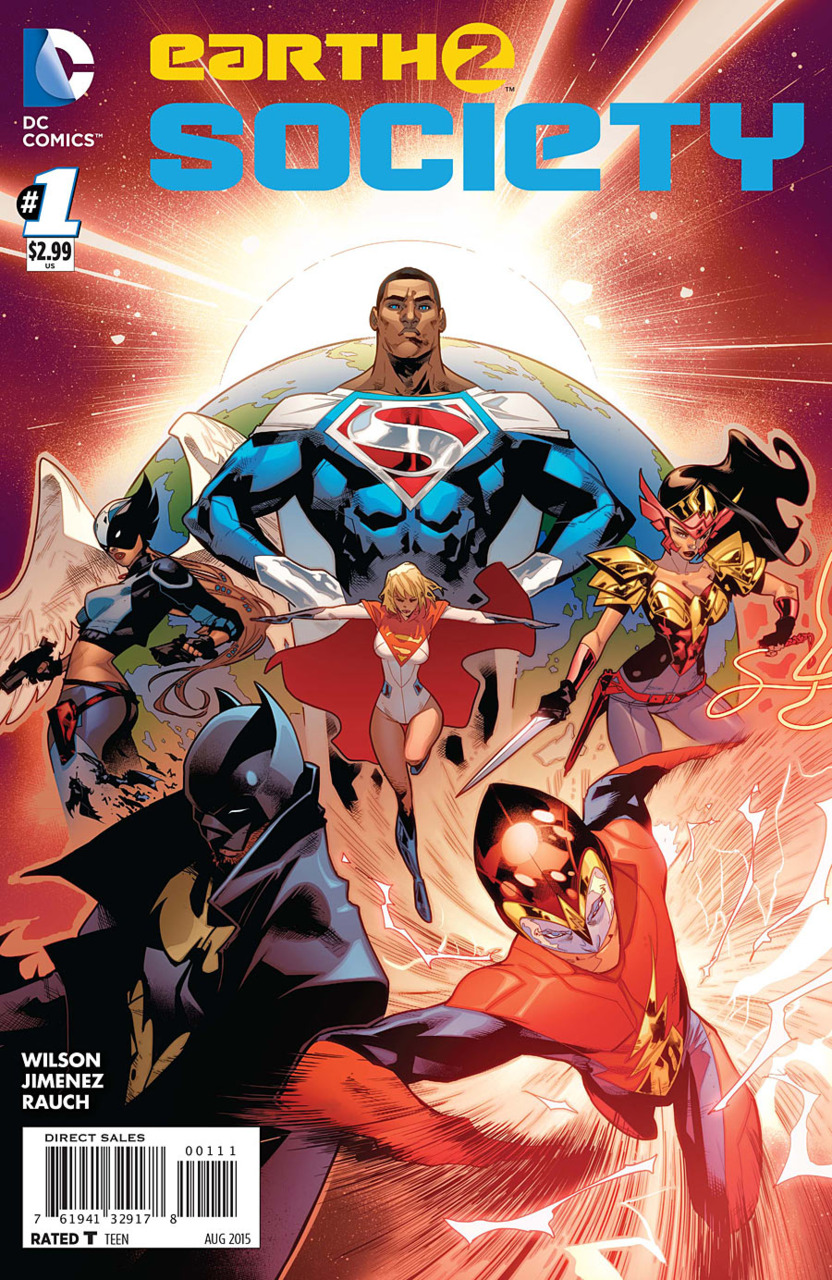 In this #1 issue Earth 2 gets it’s second chance spinning out of Convergence as the Blood Moon has been terraformed and moved into the exact space where the former Earth 2 resided in time and space. It is now 12 months after the original Earth 2 was destroyed by Darkseid and the issues is split between a chase scene with the new Batman (Dick Grayson) and flashbacks to what happened in the war with Apokolips.

The issue hinges upon a man named Terry Sloan. For some reason he is pivotal to making Earth 2 an actual possibility. Sloan is quickly caught by our villains in this issue which is a gang of masked individuals led by a man named Johnny Sorrow.

We flashback to 12 months before and Dick narrates what happened to Earth 2 and the death of his wife (Barbara Gordon) as well as searching for his son. It turns out that the events of Future’s End will infact never happen due to this change in the storyline of Green Lantern’s beacon leading them to the new world that has been provided by Telos in Convergence.

As the ships crash lands, Huntress and Mr. Terrific search for the survivors of the wrecks. By chance Mr. Terrific finds Dick Grayson in the forrest and takes him to safety and explains to him that they are there to make a better world.

We then flash forward to Batman fighting Johnny Sorrow’s gang as Terry Sloan gets away because some sort of mechanical wings attached to his back and as he and Batman fight we get a scene reminiscient to that of a Batman/Manbat tethering. The crazyness of the flight proves to be too much for Dick and he lands on the ground on his back as the issue ends.

Now this issue is the perfect issue in order to explain to everyone what came before it. Convergence and Earth 2: World’s End are both touched upon within this book by Dick Grayson and the aftermath of the evacuation of the previous Earth 2.  It definitely changes the timelines of both Earth 2: World’s End and Future’s End making those stories completely pointless. And like kind of pisses me off.

As much as I wish that the Earth 2 gang would have ended up on New Earth so we could get a JSA again it’s okay that they get their own earth again because we know we will be seeing them again in future storylines. And anyone who doesn’t love that Dick’s Batman costume has the Disco Dick era Nightwing colors cannot be called a true Dick Grayson fan.