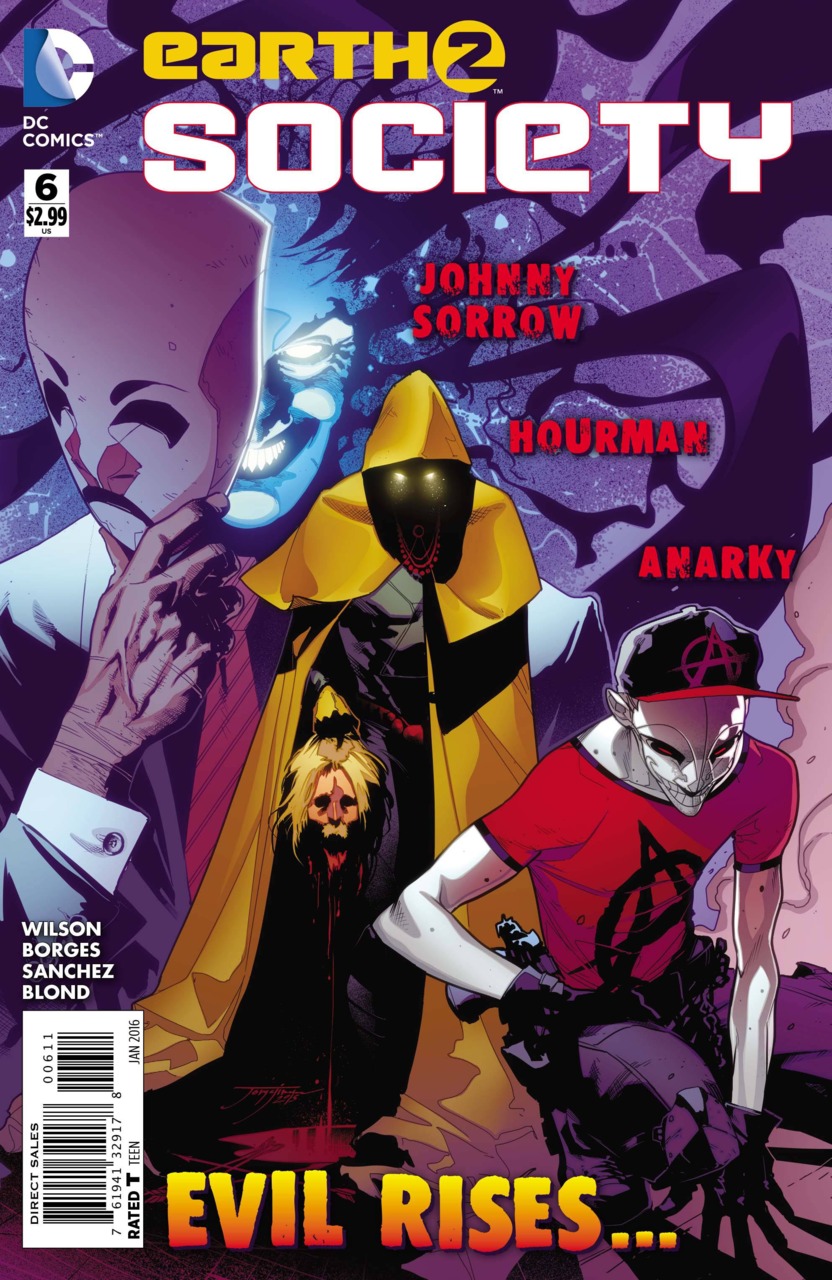 At the end of the previous issue, Batman revealed that Jimmy Olsen tried to crash the Overwatch ship into the Earth as well as murdered Terry Sloan. Jimmy Olsen has now been shown to have godlike abilities and now calls himself Doctor Impossible. He has also aligned himself with villains such as Anarky and Johnny Sorrow. Opening the most recent issue, Earth’s Wonders are confronting Olsen in his city, Erebus (Greek meaning for the deity that personified darkness).

Each hero engages a villain with Superman taking on Olsen. Jimmy proclaims that he is a god now and tells Superman that he’ll be fighting another god as well…for at least 60 minutes. Hourman appears and begins to pummel Val-Zod despite Flash attempting to help. Batman realizes that Hourman is a decoy and tells the team to stay on Olsen before he disappears. As he is alerting the team to this, Jimmy disappears saying that he has to visit an old friend.

A flash back begins and shows Jimmy’s acquisition of godlike abilities when a source vault explodes while Helena Wayne is attempting to stabilize it.

Shortly after this event, a shadowy figure breaks into the Wayne building to take back the Miraclo drug that; apparently, Thomas Wayne stole from his father. The internal monologue of the intruder explains that the drug could have saved his own father and family due to its ability to grant the user unlimited power for one hour.

As he is sneaking out of the building, Jimmy confronts the intruder and addresses him as Rick Tyler before teleporting him to Erebus City. Once there, Olsen tells Rick that he can make him so much more if he just “prays for the impossible”.

Back in the present, Supergirl and Huntress are in New Gotham discussing the changes to the Earth since Convergence. Huntress is convinced that they can still reclaim the original Earth 2 with the Source Vault. Kara warns her of this action and that her father, Bruce Wayne, would want her to move on. After Supergirl leaves, Helena is approached by Olsen who tells her it’s time to destroy the world and rebuild their original Earth with the Source Vault and his Genesis Machine. The issue ends with Helena saying “there’s no one who can stop us”.

This being my first review of Earth 2: Society I thought I would start by just giving my overall view of the series thus far. I was a big fan of the Earth 2 regular series in the beginning of the New 52. The new take on the heroes was very engaging and the writing team was able to play around with some old mythologies and create new looks for characters.

Starting off in Earth 2: Society, I have been less pleased than the start of the series in 2011. The use of flashbacks and having the story take place a year after Convergence can be jarring to read but the new writing team still has my interest with exciting moments and some compelling character development.

This week’s story did not contain any major character development as in previous issues. Instead it was mostly action with some flashbacks showing how Doctor Impossible was created and his team up with Hourman.

In regards to the artwork, I feel like the art team has done a great job at capturing facial expressions in characters which helps to elevate the scenario. They also seem to handle action well and make the fighting more exciting. Another credit to the art team is their handling of the new cities on this Earth 2. The cities have their own distinctive color scheme which highlights the general “mood” of each one. While they all share a qualities of cities that have just been built on this new world only a year previously, they all have adopted their own personality.

As far as the negatives of the issue, I haven’t been thrilled with Jimmy Olsen’s character becoming this godlike villain. It seemed to come out of nowhere and I did not feel the stage was set at all for this development. Along with Olsen, I do not feel like the creative team has created a compelling cast of villains. Hourman was a new addition this issue that has some promise and hopefully will get some development.

Overall, I enjoyed the action of this issue and I am looking forward to seeing the other heroes get involved in stopping Jimmy and Huntress destroy the world.