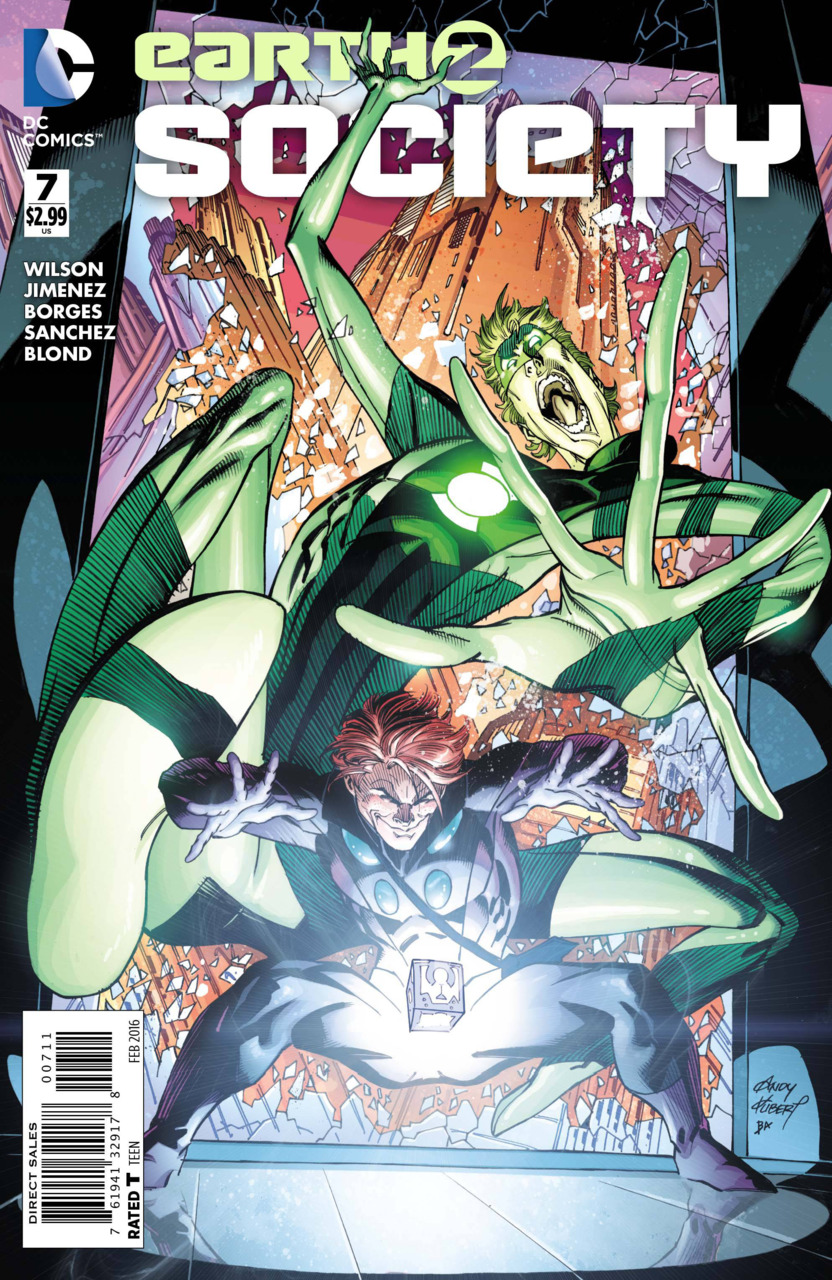 The issue starts with the entering of Green Lantern into the mix of heroes as they battle Doctor Impossible. Power Girl is trying to convince Huntress not to side with Doctor Impossible in starting his Genesis machine to transform the new world. She sees Green Lantern and asks him to stop but he ignores her and knocks her down.

Within WayneCorp Tower, Huntress and Red Arrow are finishing preparations on the Genesis machine. Helena is convinced that the machine will transform this new world into the old Earth that was destroyed.

At this time, the other heroes are still battling Doctor Impossible’s henchmen. Flash is still dazed from his encounter with Johnny Sorrow but recovers just in time to destroy Hourman’s supply of Miraclo. They then head to New Gotham to confront Doctor Impossible.

Flash arrives in time to catch Power Girl and then Superman lands. Flash leaves just as Power Girl hits Superman with an energy blast from her eyes. She is still furious with him for having developed technology for Terry Sloan that led to the death of the first Superman, although he had no knowledge of it at the time he was developing it. He asks her to forgive him and tells her to “let the past go”.

Back in WayneCorp Headquarters, it quickly becomes apparent, as the Genesis machine turns the planet into a Mother Box, that Doctor Impossible has tricked both Huntress and Red Arrow into helping him. Green Lantern breaks through the building and exposes them. Doctor Impossible begins to attack Green Lantern and tells him that he is transforming him as well as the new world.

Stating that he can’t destroy Doctor Impossible, Green Lantern traps him in his energy field and tells everyone that he has trapped him forever. The issue ends with Green Lantern telling the full team that, together, they will “bring justice to this new society”.

Well, I will start by saying that this issue did not really connect with me. It was nice getting Alan Scott back as Green Lantern. He was one of my favorite characters from the start of the Earth 2 series so it was good seeing him return. His role as the “heart of the planet” keeps him out of the picture but does not diminish his importance. I am hoping that since he has now shown himself (as a giant but still) he will now be a little more involved with the rest of the heroes. Along that same thread, it seems like we are getting the Justice Society forming with the heroes all together at the end of this issue which will keep me interested to see where the story goes from here.

Despite some nice moments in the issue, I found myself somewhat disinterested in this story. The artwork was difficult to follow and did not help in telling the story. The use of shadows as well as chaotic action scenes in these last few issues has gone a little overboard to the point where I had trouble figuring out what is happening in the scene at all.

Overall, the issue was fine and it was entertaining to see the heroes come together. I have certain problems with the artwork as well as how the creative teams introduce new plot points/characters. That being said, I am interested to see where they take the story now that the team is together and they have formed their own Justice Society.