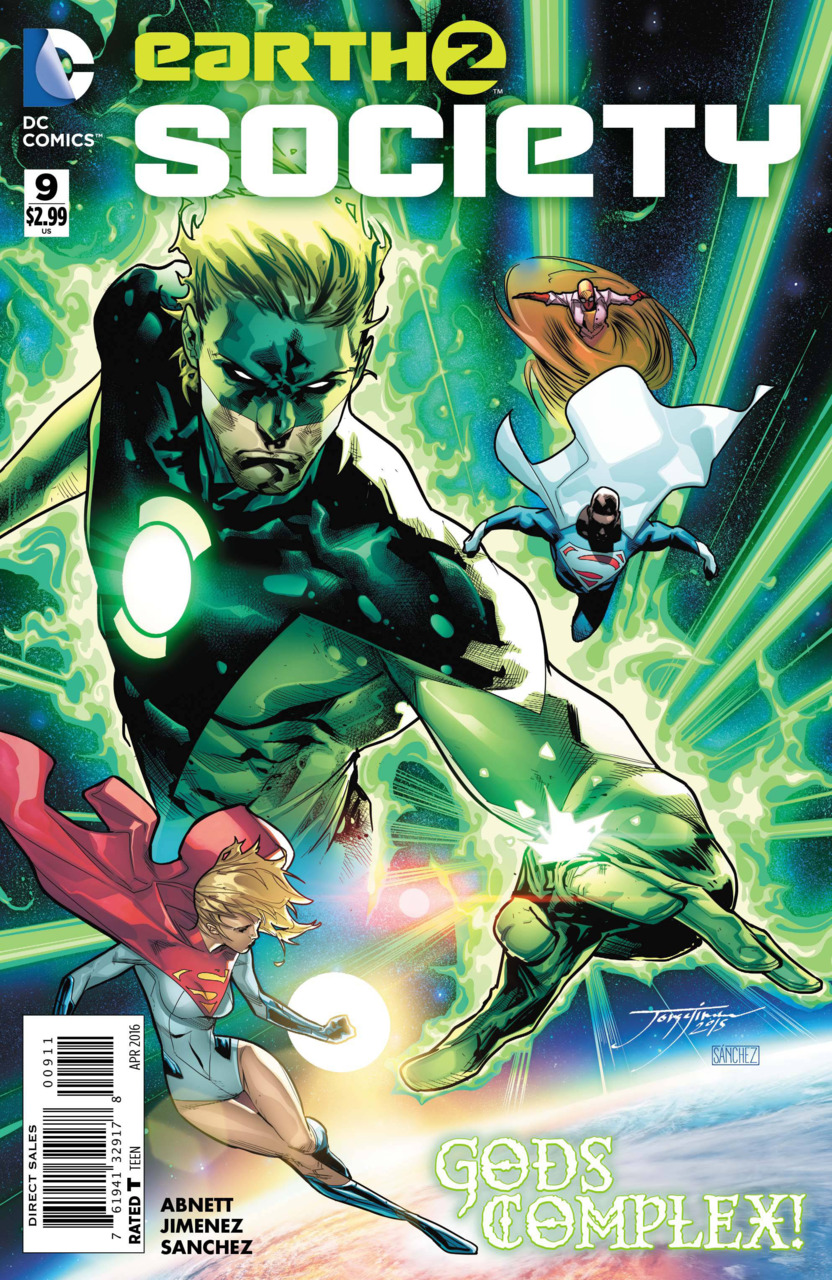 Synopsis: “One Nation Indivisible” picks up where issue #8 ended with Hawkgirl discovering Fury and the surviving Amazonians. She watches as Fury spars with multiple warriors and tries to get them to push themselves farther. One Amazonian apologizes and that she has not adjusted to the “borrowing” and her new strength. On a walk through the gardens, Fury tells Kendra that she and her Amazons are preparing to stop the future wars between the various city-states.

At the World Army headquarters, Dodds and Commander Sato track the movements of troops from Ark Home Colony against Erebus City. The troops appear to be after resource-enriched lands. Sato gives the order to Dodds who authorizes Power Girl’s intervention to quell the advancing militia.

Meanwhile, Lois Lane and Green Lantern are discussing the recent troubles of their world. Alan believes that history is repeating itself as humanity falls into old habits of warring with one another. It is because of the constant feuding between the city-states that Alan asks for Lois’ help in writing a constitution for the new Earth 2 society. Alan then becomes alerted to Power Girl’s need for reinforcements to deal with more Terraformed Beasts and leaves Lois to begin writing.

As Green Lantern and Power Girl subdue the Beasts, Steel attempts to find out if the planet has any viable energy resources. After running some tests, they determine that the planet is artificial and will not sustain the remaining human population.

In New Gotham, Batman recruits Red Arrow to help him take down Nimbus Solutions. The company is taking advantage on the energy shortage selling fuel cells that are proving to have dangerous side effects on buyers.

In Amazonia, Hawkgirl is still speaking with Fury. Fury believes that Green Lantern and the World Army are only “playing at leadership” and that she should rule the world. Kendra then asks what the “borrowing” is and Fury only states that it was a means of survival that came at the cost of the rest of the survivors on her ship.

Thoughts: For most of the Earth 2 Society series, the artwork has not been a major highlight. That being said, this issue was so full of color and great penciling that it easily is my favorite of this series. Jimenez’s line work along with Alejandro Sanchez’s great use of color just made this issue so much fun to read and look at.

The story is progressing and Abnett continues the build up for the ultimate conflict of this arc. Abnett is doing a very fine job at giving us great scenes with team-ups but also giving each individual character their own little spotlight within each issue. Like I said in my previous review, the god-like Green Lantern presents a very compelling story of a man who is trying to retain his humanity even with all his new power. In addition, we get to see Kendra back in the story in a major way and her interaction with Fury is very interesting and I am excited to see where her story goes. There is a lot the team can do with Fury given her lineage. She has the potential to be a great leader like Wonder Woman but is still susceptible to become like her murderous father, Steppenwolf.

It was also good to see some of our more human heroes, Batman and Red Arrow, given a more definitive role in this new arc as they take down Nimbus Solutions. Grayson as Batman is really working in that he has that darker edge, with talks of war and having a beard (becoming a trend among Batmen apparently), but does not have all the knowledge as Batman typically does. With all the “superhero” storylines of Terraforming beasts and literally god-like heroes, it’s nice to just see some good guys taking down evil, corporate bad guys.

The only aspect of this story now that could be considered negative would be the many plotlines that are going on right now. Don’t get me wrong…I am enjoying them a lot but I could see how someone might be frustrated with the many subplots. That is the danger of having a book that covers so many characters but I still believe that Abnett is able to pull it off.

Overall, a great issue and one that has me even more interested to see where the arc is going.