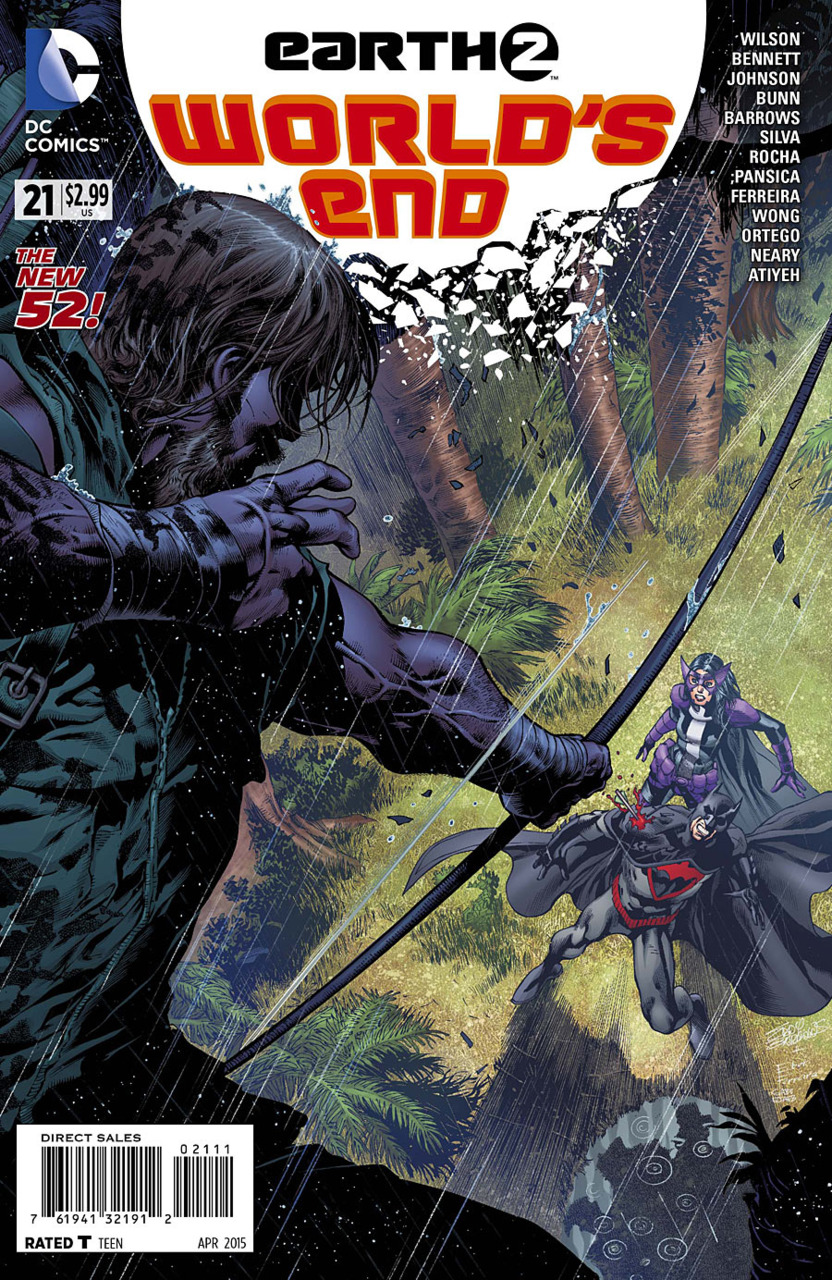 The fight for Earth 2 against the hordes of Apokolips rages on as our heroes are split up across the globe in the final battle against Darkseid. For all intensive purposes that can be said about the bulk of this series as for 21 issues now there has been nothing but pandemonium on Earth 2 in the form of Darkseid blowing up the moon with the planet made of firepits taking it’s place in order to feed of the energy of the Earth itself.

Since it has been awhile since The Batman Universe has reviewed this book I will try to do my best in offering some broad strokes and main points of review before we move onto specifically reviewing issues #18-21.

1. SUPERMAN LIVES. Much like on New Earth in the first battle between Darkseid and the Justice League it turns out that the Superman of Earth 2 this time was successfully kidnapped by Desaad in order to create an army of kryptonian soldiers to fight for the side of Apokolips.

2. IT’S ELEMENTAL – The guardians of this earth are called the “Elements” and Green Lantern is similar to Swamp Thing in this series as he protects the Earth as the Avatar of The Green.

3. GRAYSON AND SON – One of the more interesting parts of the book yet completely unnecessary has been the journey of Dick Grayson after we find out he never became Robin on this Earth. It turns out he still met and married Barbara Gordon and had a son. After Barbara is killed in the mayhem caused by the looting and anarchy in the wake of the end of the world Dick Grayson is forced to give his son to some really shady characters in order to save his life. He is now on a mission to find him with none other than Ted Grant AKA WILDCAT and the Main DC Earth’s Constantine.

4. ESCAPE FROM APOKOLIPS – After Mr. Miracle through a fit of rage releases Darkseid from his prison now he and Mr. Terrific and Fury AKA Wonder Woman’s daughter are working on escaping the attacking planet with science that is a little murky at best when it comes to being explained. This is where you just have to rely on your knowledge in general of the Multiverse and use a little Deus Ex Machina to get there in your head.

5. BATMAN’S LEGACY – The dynamic between Thomas and Helena Wayne has been hands down the best part of this entire series. Seeing the mirroring aspects of both characters and Thomas tries to redeem himself through the mantle of Batman while Helena tries to honor her father’s legacy as Huntress is truly touching stuff especially after Helena is turned into a Female Fury by Desaad and Batman, Lois, Superman, and Powergirl stop at nothing to save her.

And that is where we will begin with the issue #18-21 review.

Jimmy Olsen who in this series is very much like Oracle of the Pre-Flashpoint Universe gives a call to Batman in order to tell him he has found something left for Helena by Bruce just in case there was trouble. It turns out all roads that lead to figuring this out are synonymous with finding the one and only Oliver Queen.

One of the most touching moments in the entire series come in the form of Thomas and Helena coming face to face with each other without masks for the first time in the series. After almost losing Helena the humanity within Thomas really comes out when they both notice how much Thomas looks like Bruce and Helena looks like both her father and mother. It is really nailed home with this quote from Thomas.

They eventually suit back up and in true dynamic duo fashion they use detective work via clues left by Terry Sloan to track down Oliver Queen and he shows them “The Codex” which is definitely a subtle nod to “Man Of Steel”. Oliver Queen says that Batman was “The Ultimate Doomsday Prepper” in the fact that he accumulated DNA for every type of living organism on Earth as well as all the information on this earth’s humankind from languages to history. “Everything we are. Everything we ever were”, says Arrow.

I have to admit even though it was probably just a coloring mistake it was kind of distracting seeing Arrow go from wearing a green costume to it all of a sudden being red.

Meanwhile in Russia for the storyline for the Avatars of the Elements is beginning to look dire as all the Elements begin to drop one by in their fight against the Deathspawn. Alan Scott is chosen to remain as the last Avatar on Earth and the others combine their strength in order to overcome the Deathspawn and in doing so disappear.

Dick Grayson and Ted Grant finally track down who kidnapped Dick’s son and it turns out they have been after Brainwave. They follow a trail of people who are being controlled by the villain and in the scrum Ted and Dick become separated underneath The Atom’s Haven Command Center. It turns out that most of the people in the Atom’s Haven Command Center are also being controlled by Brainwave and Major Sato gives up hope that they will be able to evacuate the planet.

Meanwhile The Flash and Hawkgirl are doing their best to take on the terraformers that Darkseid has unleashed on Earth to consume the planet.

One thing about World’s End is much like a soap opera on daytime television it is filled with action and drama as well as at some points you are left scratching your head in wondering if some of these characters are even necessary to the overall plot or if they were just used to fill up pages. If it seems like my points of review are far too brief to give this series justice it is only because there really isn’t a whole lot more that I can say about what happened except for exactly what has been written. A lot of the time throughout this series there may be things that happen and word bubbles are used but often the things that take place are of no actual consequence and it leaves this reviewer to wonder whether or not this entire series could have been easily taken care of in the main Earth 2 book over the six months that we have been reading World’s End.

With only five issues left, one is truly left to wonder how much more they can fit into this series before it comes to it’s natural ending point. Will the war between New Earth and Earth 2 that has been teased in Future’s End even be touched upon? This reviewer just can’t imagine that they have enough time to truly do it justice but after reading 21 issues there is certainly no turning back as this series ends with issue #26.