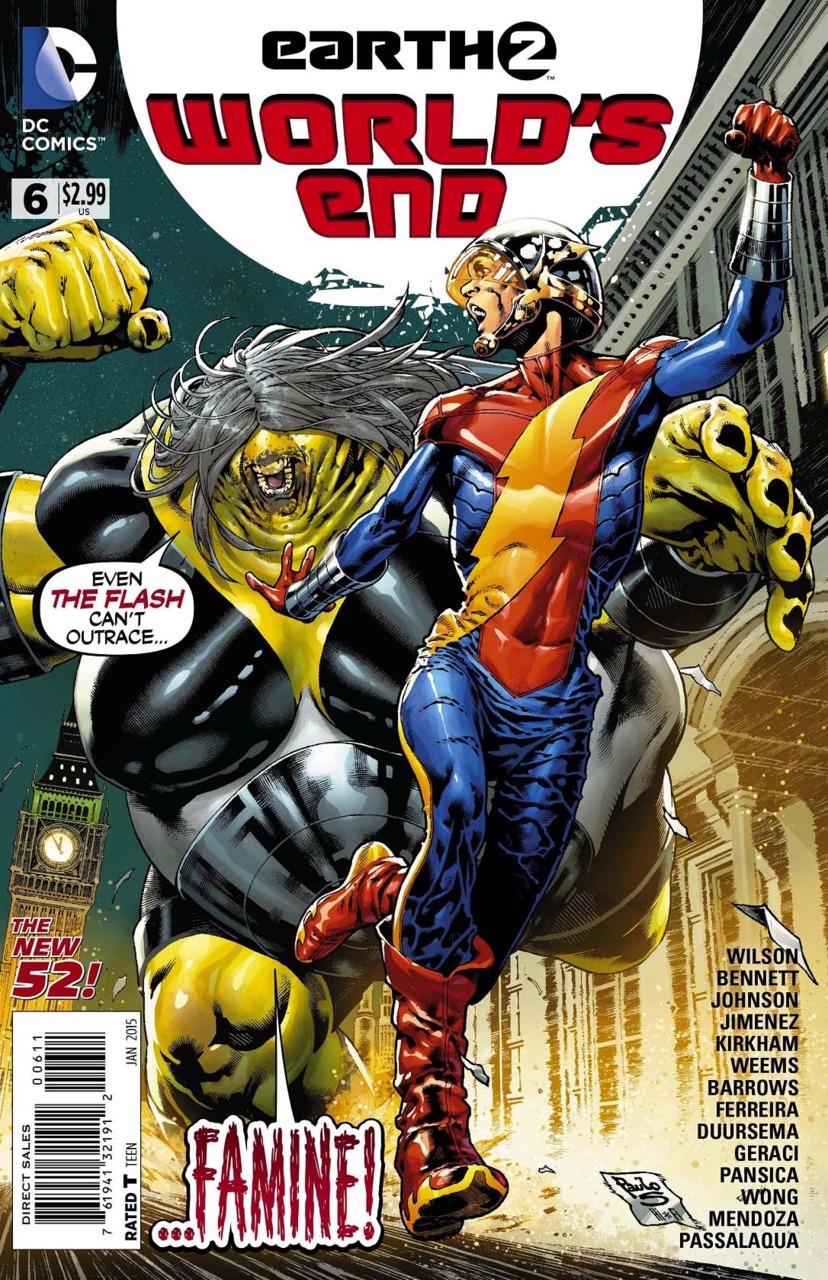 Earth 2: World’s End opens with a brief recap of the events leading up to the beginning of the series. We are treated to a bit of background information in regards to the major characters of Earth 2 including the relationship between Alan Scott (Green Lantern) and his now deceased boyfriend Sam Zhao. Additionally we see the origin of Darkseid’s initial attraction to Earth 2: Terry Sloane created a portal to allow him to see other universes…this in turn caused Darkseid to take interest and strike a deal with Sloane that resulted in Apokolips’ first invasion. To unite against their common enemy, the armies of the world came together to battle their foe. However it was the Trinity of Batman, Superman and Wonder Woman that dealt a decisive victory for Earth…the tragedy was that all three heroes lost their lives in the final battle.

Sometime after the invasion was over, Terry Sloane would be recruited by the World Army to help them (his involvement with Apokolips currently being unknown). Finally the summary ends with the main events of the “Earth 2” series itself: the gathering of the new heroes and the beginning of the second invasion by Apokolips.

Back in the present, The Flash (Jay Garrick) is busy racing around the world gathering intel and communicating with the various World Army bunkers. One such bunker in Chicago holds Police detective Barbara Grayson, her reporter husband Dick and their son. The family discusses the events of the invasion and how the rations given out are starting to run low.

Meanwhile in Geneva, the newly returned Power Girl and Huntress come across a team of heroes rescuing civilians following their clash with the Superman clone Brutaal. Huntress and Power Girl eventually confront the group and demand to know who they are. Batman explains that he is Bruce’s father Thomas, while Red Tornado tells Power Girl how she is Lois Lane whose father used advanced technology to place her inside the machine she is now. However, the world is soon shaken by the eruption of several fire pits as the Furies of Apokolips rise from the flames.

Quickly jumping into action, the heroes begin to battle against the Furies (whose powers resemble the Four Horsemen of the Apocalypse) and we are treated to a montage of battle sequences around the world – Batman and his group against War; Hawkgirl, Doctor Fate and Flash versus Famine; Green Lantern takes on Pestilence; lastly Aquawoman seeks out Death who has vanished into the oceans. Meanwhile at World Army HQ, Commander Khan is informed that Apokolips itself has entered their solar system and is on a collision course with Earth. Khan brings together many of Earth 2’s heroes to devise a plan to invade the approaching planet and stop it.

Returning to the battle against War, Red Tornado eventually manages to reboot her memory and knocks enough sense into Power Girl and Huntress to stop their attacks…however War has used this confusion to escape unnoticed. Realizing that something more sinister might be occurring within the fire pits, Batman and the others decide to enter the pit and shutdown whatever is happening. Upon entering, the group is quickly accosted by Desaad who captures Huntress.

Chasing after them, the group stumbles upon a laboratory with several clones of Superman within and the heroes are divided on which path to follow – Batman and Power Girl want to go searching for Huntress, while Val Zod and Red Tornado want to see if somehow Superman was still alive within the pit. Batman decides to continue searching for his granddaughter and quickly doses up on Miraclo…a drug that briefly enhances his strength, but is quite addictive. However due to his anger and drug abuse, a fight ensues between the Kryptonians and the Dark Knight.

Elsewhere, the other heroes are continuing their battles against the Furies…Green Lantern is approached by The Green and asked to team with Solomon Grundy and find the other avatars in order to battle Apokolips; Doctor Fate accidentally transfers Famine’s powers to himself and starts inadvertently killing everyone around him; Barbara Grayson can be seen deputizing several Chicago citizens to protect from any looters, including Ted Grant in his first Earth 2 appearance.

So, a lot happens in these issues and it can be confusing at times as to what’s going on and who is where etc. One of the major downfalls of this series is the extensive knowledge that you need of the ongoing Earth 2 series, which thankfully I’ve been reading since it started. That being said, even I was confused at what was going on.

The beginning of this series reminded me how Batman Eternal started, trying to show each character’s story in each issue…and it ends up that very little happens to each character in the overall scheme of things. Take the Batman story that I summarized – Batman and his group battle against War, end up fighting each other, they go into the fire pit to shut it down, have Huntress kidnapped, discover the Superman clone laboratory, and then argue about which hero they should be searching for. That’s it. Six issues worth of Earth 2 for what probably could fill a single issue. I think that all weekly series fall into this trap of trying to tell too many stories with a ton of characters…I feel like I need a giant chart to pinpoint who’s where and what they are doing. Half the time you only see some characters for a few panels or maybe a page.

With all of that being said, I do find this series extremely intriguing…I may be slightly confused with each issue, but I think I’m more looking forward to see how these events will lead into Futures End.

The best thing about this series is definitely the art; there are some amazing panels and splash pages…although I’m slightly confused as to why this series requires a slew of artists for each issue. Everything seems to flow rather well, so I’m not sure if there is a different team of artists for each storyline…whatever the case may be, it’s definitely a beautiful book to look at.

Overall, this is an intriguing series that I’m looking forward to reading…however I don’t recommend it to anyone who hasn’t read the Earth 2 series thus far.