Editorial: Is it time for a Batgirl/Starfire team up? 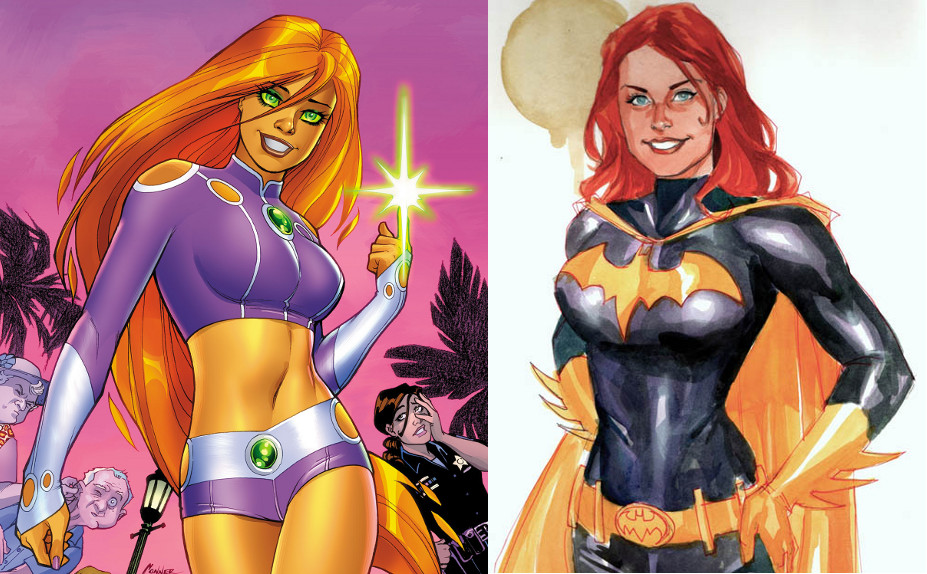 Editor’s Note: Click on the bold text links for some images from DC past!

While reading the latest issue of Batgirl and the Birds of Prey, a thought occurred to me; it’s time for Barbara Gordon and Kory Anders to officially have a team up. This thought was triggered by a scene in Batgirl and the Birds of Prey #8 where Huntress and Batgirl share a laugh about Nightwing’s expectations of them to start a cat fight over him. I took the whole thing as a meta joke meant to reflect how far the two women have come since their pre-Flashpoint days, but it made me think about the overdue team-up between Starfire and Batgirl.

Some of you might be reading this thinking “Wait, you mean they’ve never met? But their Betty/Veronica rivalry over Dick Grayson is legendary.” It may surprise some people, but despite their shared history with Dick Grayson, the two women have only had one on panel interaction. Sure, there have been massive group shots of various heroes where they have been in the same room (Green Arrow and Black Canary Wedding Special being one example). There are two issues of Batman Eternal (#11 and #28) where Starfire lands a ship mere feet from Batgirl to pick up Red Hood, but neither woman interacts. Kory and Babs are on separate sides of a roof just out of sight from each other in Red Hood and the Outlaws #9. So close every time but yet so far! Recently, Dick separately visits both ladies in Nightwing #15 to reflect on his current love life.

Their one and only interaction was in Nightwing Annual #2. The continuity in that book is dubious, but we see a flashback where Barbara Gordon goes to declare her love for Dick Grayson. She knocks on his door and Kory answers. Realizing that Dick has moved on, Barbara quickly leaves. Despite the awkward circumstances, neither woman is mean to the other. Kory even tries to stop Babs from leaving and helps her save face by lying to Dick about who was at the door. The flashback seems to take place shortly before “The Judas Contract”. The book itself was published in 2007. This means that it took until 2007 for Starfire and Batgirl to meet, and they haven’t met again since! If I’m wrong about this Bat-fans, post a comment and I’ll give you a prize. I wouldn’t count the Titans issues where Starfire listens in to other people talking to Oracle.

Fandom has given them this “Betty and Veronica” status since they’re both arguably the most important women in Dick Grayson’s life. Starfire and Batgirl were even engaged to Dick at one point.  They have never had a “Mary Jane and Gwen” moment where they verbally spar for their man. When Kory and Dick were dating in the 80s and early 90s, Babs was never mentioned by either of them in the Titans book. By the time Dick and Babs became a couple at the turn of the millennium, the Nightwing/Starfire relationship had been over for years. Continuity, retcons and editorial mix-ups did confuse the issue. Judd Winnick had Dick and Kory sleep together over in Outsiders while he was trying to win Oracle back over in Nightwing. Nightwing: Year One and Nightwing Annual #2 tried to rewrite history by having Dick lust over Babs during the height of his relationship with Kory.

Despite never having a true meeting, the two women are aware of one another. Barbara has made her disdain of Kory known many times. In Nightwing: Secret Files and Origins she mocks Kory’s physique to Dick. In early 2000s Titans, Oracle’s disdain for Starfire is enough to make the rest of the team wonder where the hatred is coming from. In Birds of Prey: Secret Files and Origins, Oracle considers who to use as an operative and quickly dismisses Starfire because of their shared history with Nightwing. Kory’s opinion on Babs is harder to track. The only example that comes to mind is from Batman Eternal #28, where Starfire senses that Jason Todd has unfinished business with Batgirl. “You Bat-people. I have been through this before. Do not argue. Do yourself, and all of us a favor, go say goodbye to Batgirl,” Kory tells Jason.

It’s been decades! It’s time for these women to stop doing this dance and to finally have a good old fashioned team up!

At one point, I thought it would be funny if the two of them had a team up and never mentioned Nightwing. It would be a hilarious subversion in addition to giving the book a passing grade on the Bechdel test. Upon further reflection, this would be unrealistic. Dick has been a huge part of both of their lives and that’s something they share. It would have to be brought up. That doesn’t mean it should define their relationship to each other.

Like Helena and Barbara in the latest issue of Batgirl and the Birds of Prey, the two women could show that they are bigger than the love triangle fans have hoisted upon them. Kory could admire Babs for her intelligence and resourcefulness. Kory is more of a fighter while Babs is a thinker. Ultimately, I think Starfire would respect Batgirl for excelling in areas where she finds herself lacking. Barbara would respect Kory for her perseverance. Kory was betrayed by her family, spent years in slavery and was still able to rise above it all. I can’t see how Barbara wouldn’t admire that.

This is an unexplored DC Comics relationship that is ready to be mined. Perhaps once it’s done, they’ll be less “Betty and Veronica” and more “Anna and Elsa”.

PS: Hey DC, if nobody else wants to write this, then I’ll do it. You can just stick it in the back of an annual.