Editorial: The Future of the Bat-Franchise 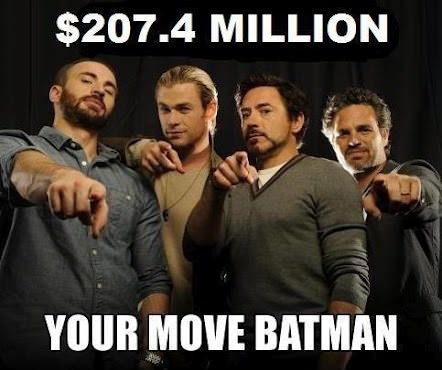 There is a great deal that could and should happen for the future. Especially in Gotham City. Many things indeed. Specifically with the film franchise, including the animated films. Yet, this concerns more than just Batman. This is about the entire DC Comics filmography that has yet to be made. And sadly, this all started with the Avengers movie. In case you’re wondering, Yes, I did see it. It was much more than I was expecting. Also, it’s difficult to argue with it being the number one film of this season.

Everyone has heard the latest buzz that Dwayne “The Rock” Johnson has been cast to play a DC superhero. The question is, which one? This is confusing to yours truly. At least a year ago, maybe longer, there was mention of a Captain Marvel movie. In said mention, which it’s fair to say may have been a rumor, I remember reading that Mr. Johnson showed interest in being Black Adam. Honestly, I hope that this is the actual casting that has been made. First off, the Rock looks dead on like Teth Adam. Also, he’s had to play an ancient Egyptian before as the Scorpion King in his own film and in the Mummy series it derived from.

No matter what role he’s been cast to portray, I think it’s time we faced facts. Christopher Nolan has made no mention that there will be any other Bat films that he will helm, though Christian Bale has recently made mention that if Nolan were to pen a new script, that he’d be willing to don the cape and cowl once more. He’s approached the role with a new interpretation while still keeping to the core of the character that we’ve seen before. He even tries to do the majority of his stunts. He has some very large shoes to fill when he’s done, though. Brandon Routh has already been replaced by the very capable Henry Cavill, whose worked on the Tudors and played Theseus in Immortals. But who will carry the torch of Batman?

There has been no word on a recast/reboot yet, mainly due to the fact we have yet to even see The Dark Knight Rises. However, I have one choice for filling Bruce Wayne’s shoes: Luke Evans. He’s demonstrated his ability to perform action in the most recent Three Musketeers film, as well as Zeus in Immortals. Also, he’s played a detective most recently in the Raven, opposite John Cusack’s Edgar Allan Poe. He’s got the dark brooding look. He even did a decent American accent in The Raven. I admit this isn’t a great basis for an argument, especially if I was presenting such an idea to a film studio. Yet, Evans has yet to find a role that is truly his. I think Bruce Wayne could be that role.

Additionally, I feel that DC is dropping the ball on animated features. The next one is Superman vs. the Elite. We are also awaiting The Dark Knight Returns within the year. I think it’d be interesting to write a new original story for Batman Beyond. But this time, make it darker. At least, darker than the original cartoon (which is impressive, despite the age range of the audience it was intended for). Also, we need to answer the Avengers back with an even more impressive Justice League movie. It’s unclear whether Ryan Reynolds would be willing to return as Hal Jordan. The studio, as yet, have made no comment on whether Green Lantern will continue. Admittedly, Mark Strong does make an incredibly perfect looking Sinestro. This would not be the first time, however, that a character’s film is either rebooted or disincluded within a comic studio’s franchise.

Marvel, for example, has not included the Punisher nor the Daredevil films into the new Marvel film continuity. So, Green Lantern could potentially be re-cast. Also, we need a Flash movie, a Wonder Woman cameo or at least her own film; J’onn J’onnz needs to show up somewhere. As well as Green Arrow, Black Canary, and even Aquaman. Ultimately, they may put together any number of JLA members. However, there’s good news, and we owe it to Marvel, especially to Joss Whedon. Due to the Avengers’ surpassing The Dark Knight’s film gross, studio executives have decided that superhero films need to be put in the hands of people comfortable with these characters and who understand writing them.

As a result, WB exec’s have been putting more of their DC characters into the hands of none other than Christopher Nolan. Mr. Nolan is staying mum on most of the development, which many of us can appreciate as most films show us too much in the previews these days. There is officially a Justice League film in the initial planning stages, being helmed by writer Will Beall. The most exciting news, however, may be that a Suicide Squad is also in development. A huge departure from our usual hero films, instead will be about a group of incarcerated supervillains. I truly hope we see Deadshot. Also, films are in development for Lobo, Flash, Aquaman, Green Arrow, and Shazam. Hopefully, the Rock truly is attached to that project. Can’t wait to see who will be cast. Stay tuned Bat-children. Things are just getting started. Yet there is one last market that DC hasn’t fully taken into consideration.

That would be the animated features. Batman Beyond is certainly one that comes to mind. Such a brilliant way to continue the Batman legacy but relatively untapped. Only three seasons were made as an animated series. There is now an ongoing graphic novel series, and to my knowledge, its much more mature than the original cartoon. However, I feel these are the kinds of things that should be developed for animated features. Less for the kids, and more for the teen and adult markets. After all, they’re the ones who buy them. Though, admittedly, the children are the ones who will remember these heroes their whole lives. We were all one of these kids at one time. Batman: The Animated Series is still one of my favorite cartoons of all time. And it was very mature, and pretty dark for a children’s show. DC should be more willing to take risks with the animated features. They could even make a Justice Society animated feature, which would be the first, aside from certain episodes of Smallville. There’s much to look forward to. Keep your Bat-ears to the grindstone, and stay tuned.