School Dramas Are In! 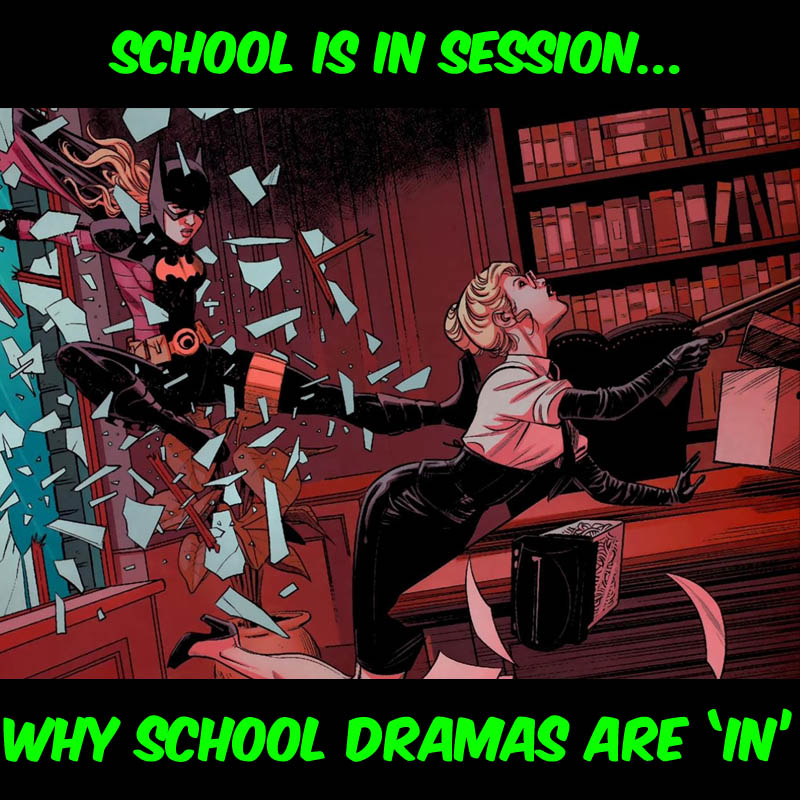 I wrote another article which gave five reasons as to why Convergence is detrimental to the hearts of comic readers. In the vein of David Letterman and his top-ten lists, I thought I would continue my use of five reasons in order to make a point. And my point this time? It is simply that school dramas as a comic genre are the way to go! (As always, this article represents my thoughts and does not reflect the opinions of the staff at TBU.)

Throughout the article I may reference one of the following comics. Since only one of them is from DC, I thought I would at least give a short description of each of them:

Spider-Man Loves Mary Jane (All Ages): A Marvel Comic that ran roughly from 2004-2007 and follows Mary Jane Watson, a popular high schooler who always seems to be in a good mood. Despite her sunny exterior, MJ has many insecurities that even her closest friends are unaware of. We follow her relationship with other students, her crush on Spider-Man (who is briefly seen in each issue, actually), and her life in and out of school.

Five Weapons (All Ages): An Image Comic that ran from 2013-2014 and follows pacifist ‘Tyler’/Enrique who is enrolled in a school for assassins. Each assassin can train with one of five particular weapon types. ‘Tyler’/Enrique has a big secret and uses his mind as his weapon while solving a mystery.

Gotham Academy (Rated T but seems All Ages): From DC Comics: WELCOME TO GOTHAM ACADEMY! Gotham City’s most prestigious prep school is a very weird place. It’s got a spooky campus, oddball teachers, and rich benefactors always dropping by…like that weirdo Bruce Wayne. But nothing is as strange is the students! Like, what’s up with Olive Silverlock? Is she crazy or what? Where did she go last summer? And what’s the deal with her creepy mom? And how come that Freshman MAPS is always following her around? And is she still going out with Kyle? P.S. Did you hear the rumor about the ghost in the North Hall?! GOTHAM ACADEMY is a new, monthly teen drama set in the shadow of Batman and the craziness of Gotham City, with new characters and old plus a secret tie to Gotham’s past…

And now…the five reasons why a school drama should be on your comic pull-list: The setting in all stories is key. In the best stories, the setting is oftentimes a character. This is absolutely true of Gotham City, a dirty and corrupt character that has the potential of being good. It influences some and is influenced by others. Where a school is the setting, there are so many opportunities for storytelling, and of course, of having a school be the character. We have seen this already in Gotham Academy where we are told on a couple occasions that a wing of the school is haunted, and we see the bell tower play a pivotal role in the end of the first issue. In Morning Glories, every area of the school holds secrets, and sinister moments lurk in corners. Schools have the ability to put the characters (students) in creative moments that manipulate them and force them to grow and develop or be left behind. Oh! And of course these moments happen in just your average classroom, cafeteria, gymnasium, you name it! I bet it makes you look at educational edifices differently, eh?

Schools also have the luxury of creating a smaller setting. Sure, we walk in the moderately-sized Batcave and we see only pieces of Gotham City in any number of Bat-books, but occasionally it can be overwhelming to see the huge scope of the city. A school, while it could have many levels and rooms, can only be so big. I think this is good idea because we want to focus on how the cast interacts with the setting, rather than reading a book all about the ‘where’ with only a little about the ‘who.’ Let’s be honest, some books, TV shows, and movies are overwhelming because of the large cast and not enough time to develop them. Leo Tolstoy’s epic War and Peace has an astounding over 500 named characters. How many of those do you actually get to know! In more realistic terms, some comics, while they do have the freedom of splitting up their stories into several parts, do still have too many characters. I submit Batman: Eternal as an example. If you listen to the Comic Cast, you have heard me speak of my confusion, especially during the Arkham Asylum episodes. Not only are there so many characters throughout this weekly series, but some storylines are put aside while others are focused on. What happens? Well…we forget characters and stories.

The school drama gives us a small, tight cast list, which allows us to get to know each character quickly and stay and grow with them throughout the run. All of the above books I have mentioned (with the exception of Morning Glories which added cast members in its second season) has a smaller cast, where…everyone knows your name! (That was a ‘Cheers’ reference, BTW.) Heck, Gotham Academy mainly introduces Olive and Maps! How great is that? When you have a smaller list of people you are reading about, you pick your favorites, get emotionally invested, and enjoy the ride more. One of the main reasons why I love to read school dramas in comic format is the fact that issues can either develop the cast as a whole or take moments to focus on one character in particular. Morning Glories does this often, and so does Five Weapons. Five Weapons focused on one character/weapon each issue while developing others alongside him/her and pushing the timeline of the story. Morning Glories, on the other hand, develops one character while not pushing the timeline of the story, a la Lost. For example, one issue may focus on Casey and what she is doing and then the next could focus on Ike and what he is doing at the same time as Casey. These dramas can take moments to focus on particular people without the danger of muddying the timeline of the story as a whole (like, I believe Batman: Eternal does occasionally when it shifts focal points). It’s true that this could be a possibility for all comic books, but I think that stories taking place in a school, with a smaller setting and smaller cast holds the greatest potential and facility for focusing on one person at a time.

Absolutely, it is! School dramas are a newer and more original genre than we are used to. Sure, it still has aspects of fantasy and drama, but with the backdrop of a school, it is a completely different comic. We are accustomed to dark, gritty detective books, supernatural, romance, spy, sci-fi, and your everyday hero-books. There is a radio station where I live and their slogan is, ‘Different is good.’ As a subscribing comic reader since the early 2000s, sometimes you feel like you’re reading the same old thing. Spicing up the medium with something new and different is laudable. This was especially true of Spider-Man Loves Mary Jane because you may read about Spider-Man, Peter Parker, and Mary Jane in Amazing Spider-Man or any other associated title, but the book is about Spider-Man. This book explores who Mary Jane is, and develops the character in such a loving and thoughtful manner.

Along with the genre being different, it is also fun! With the exception, perhaps of Morning Glories (and even that has its moments), all of the books I mention have a lighter tone and fun quality attached to them. And boy do we need that! Just because I say it’s fun, doesn’t lessen the quality or attention that we should pay to it. In a company full of dark and…gritty, titles, Gotham Academy is just what we need to brighten up the Bat-line. It also gives readers the chance to cleanse their palates after reading several serious titles. Fun and different are good! That’s right…we have all experienced what it is like in school. We’ve seen drama, mean girls, and bullies, endured hours of homework, made friends and enemies, and frankly, just tried to survive. Now as readers, we are either distanced from the subject or close to it. In either case, we can totally relate to many of the school happenings. I once told a student that people like superheroes that they can either never hope to be or ones that they relate to. All of these school dramas have a little bit of each. There is enough of the awkwardness of school to make it believable, and there is enough fantasy to make reading a school drama more than tolerable. I enjoy putting myself in the comic and trying to figure out which of the characters I would be. Would I be friends with Mary Jane? Which of the five weapons would I choose? If I were a Morning Glory, would I survive? Would I try to date Maps’ older brother Kyle? These comics are fun to read, believable, with a little something special on the side.

Well, there goes another editorial trying to convince you of something! At least this time I’m telling you TO buy something! I encourage all of you to read Gotham Academy, and to check out the other books that I mentioned throughout. Go out there and get educated!