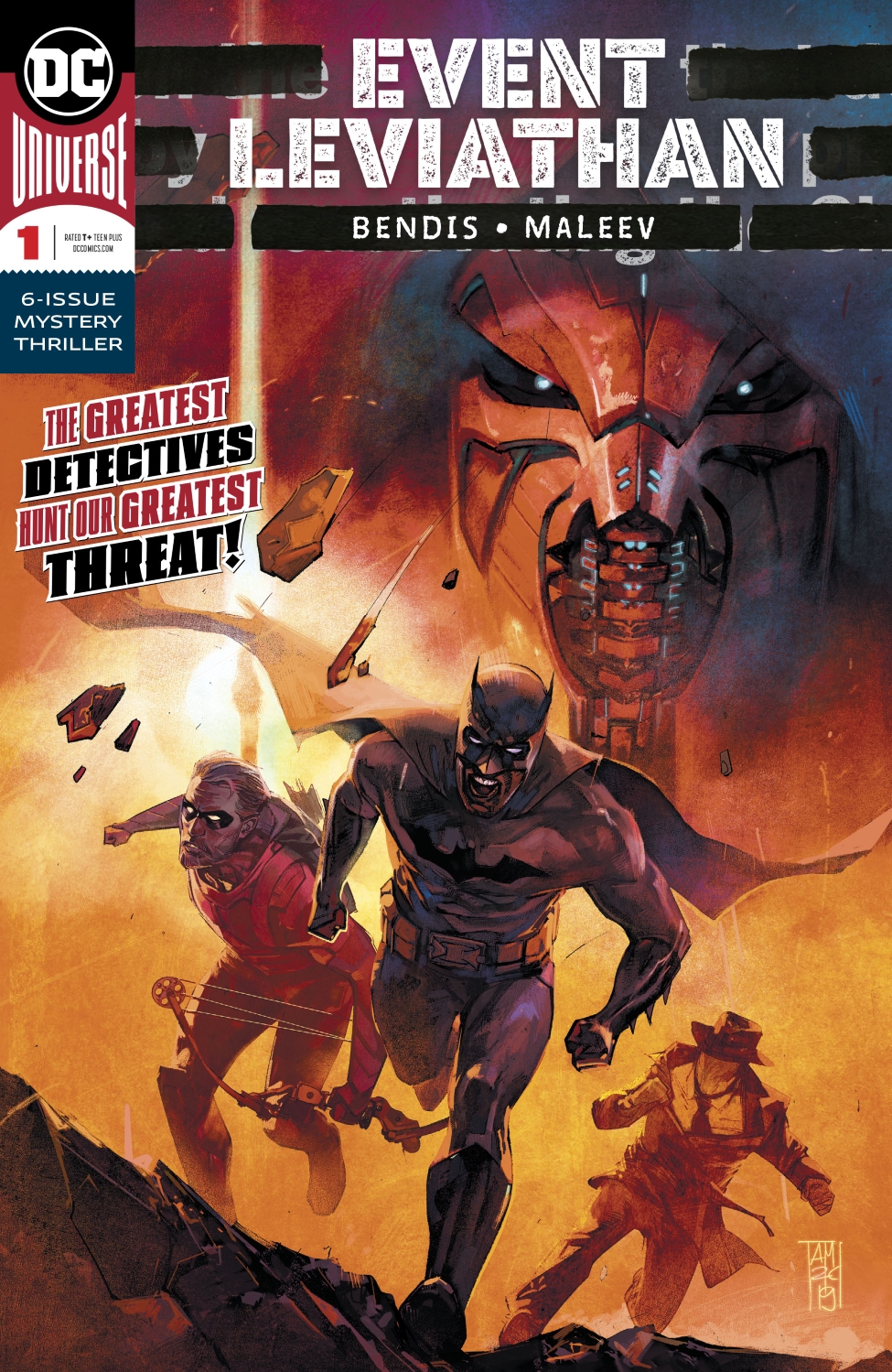 Synopsis (spoilers ahead): In the wreckage of Argus, Batman meets Lois Lane as they both investigate the latest in the series of Leviathan attacks on the world’s intelligence agencies, including Amanda Waller, Lois’s father Sam Lane, the DEO, Spyral, Cadmus, and others.

They find Steve Trevor, who tells them what happened less than an hour before – he was enveloped in an energy shield, protecting him from whatever destroyed the new Argus facility. They discuss the fact that Leviathan, the secret organization (from Batman Incorporated by Grant Morrison) once under Talia al Ghul, has taken responsibility for these attacks, and that Talia no longer controls it.

In shock, Steve accuses Lois of being Leviathan, then realizes that Lois and himself have both been set up as red herrings to distract from Leviathan’s further attacks. As Steve starts shooting wildly, clipping Lois, Green Arrow arrives and knocks him out with a taser arrow. Batman and Lois plan to contact the best detectives in the world to solve the problem as quickly as possible since Leviathan’s attacks are clearly immensely powerful and precisely timed. In the background of the wreckage, the Question observes, then leaves.

The doctor from Argus seen in Steve’s description of the destruction of Argus awakens, and hears Leviathan saying they want to help her achieve her vision of the future.

Analysis: After nearly six months of buildup, Event Leviathan is finally here. Brian Bendis, having bulldozed half a dozen secret organizations, has started the main fight against the mysterious new leader of Leviathan as Batman and Lois Lane converge on the latest attack (for more information on the buildup to this event, check out our review of Superman: Leviathan Rising special last month). While Bendis’s dialogue remains very enjoyable, the structuring of this issue is a bit puzzling – instead of starting with the attack, we spend most of our time in the burned out hulk of the Argus facility, and the whole issue takes place almost entirely in one conversation. This gives a feeling of smallness, though the previous issues of Action Comics and the other lead-in special issues have given a truly worldwide scope. Hopeful the next five issues will widen the action and include more accomplishment, as this issue basically recaps what’s gone before (the Leviathan attacks and claims that the organization just wants to make a better world) and sets the heroes on a collision course with each other.

The star of the issue is definitely digital painter Alex Maleev, longtime collaborator with Bendis on Daredevil, Spider-Woman, and Scarlet. His work here is beautifully appealing, with strong character work for all of the cast, dark and moody as well as bright and neon color work for the different sections of the narrative, and a real spark when he’s drawing Batman, hinting at a possible future collaboration with Bendis for that character. Maleev also provides the excellent main cover, while Kenneth Rocafort gives us a Leviathan headshot for the variant, not quite as exciting as the heroes running towards the camera on the main cover.

As an avid reader of the last six months of Action Comics and the other lead-up issues to this event, I am quite excited for an action-packed look at the spy agencies and superheroes of the DC Universe crashing together, and hope that the next issue gives us a bit more of that action!