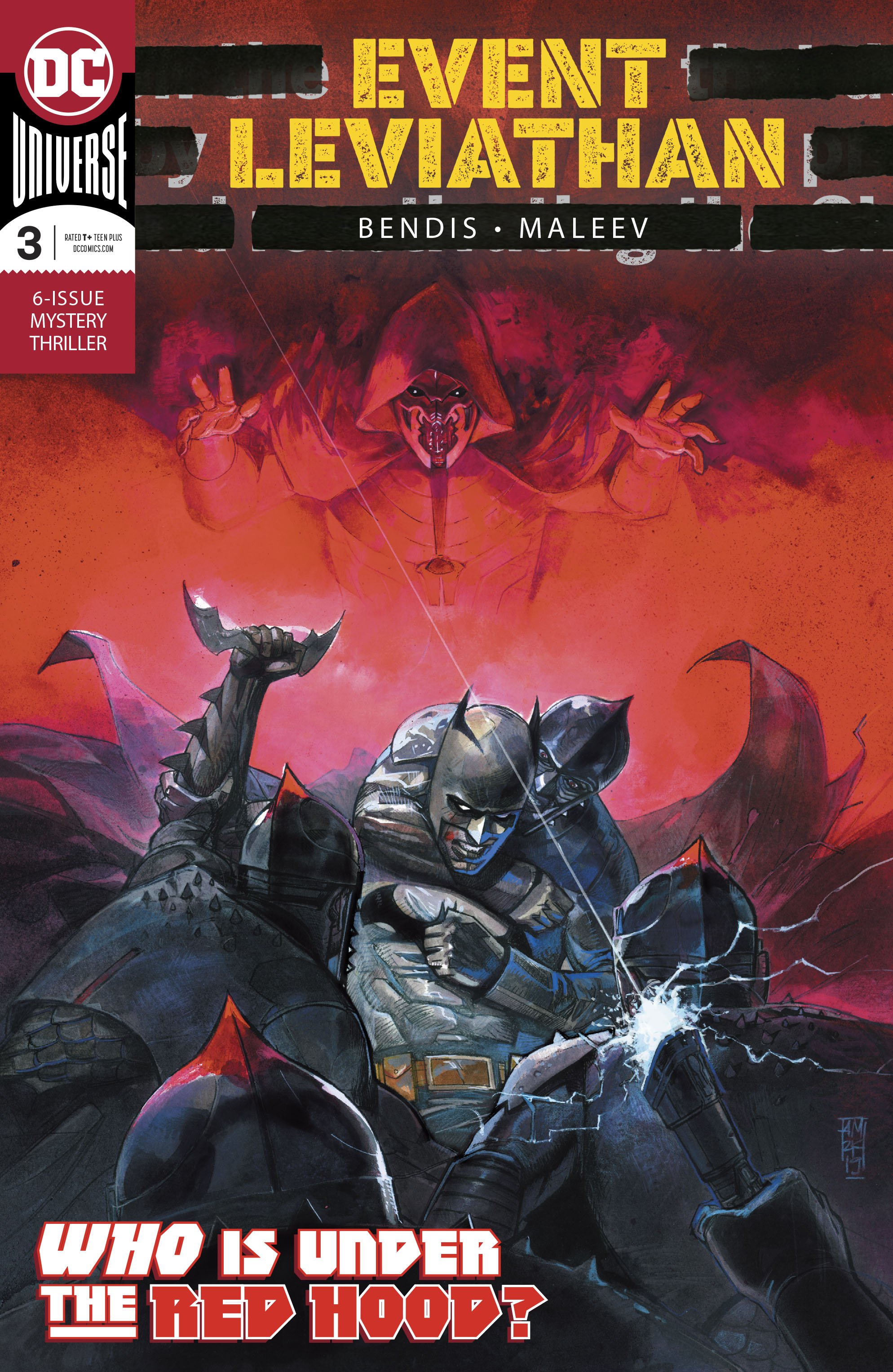 Overview: As Batman and his team of detectives fail to capture Red Hood, Superman discovers Amanda Waller and Leviathan.

Synopsis (spoilers ahead): In the Fortress of Solitude, the Question (Vic Sage) examines Superman’s hideout as Batman, Green Arrow, Robin, and the rest of the team bicker about whose responsibility it is that they lost Red Hood (Jason Todd). Green Arrow questions Manhunter (Kate Spencer), as Lois tells them the Fortress has been moved to the Bermuda Triangle. Robin, who accused Jason in the first place, says that Red Hood is a master fighter, explaining his getaway.

Flashbacks to the fight show Red Hood holding his own, using the confusion of the hastily assembled detectives against themselves. Robin tangles with him as they fall from the skyscraper (shown in the last issue), but Batman pulls Damian off of Jason midair, and they all fall into a body of water, where the fight continues.

Green Arrow asks Lois what Red Hood told her. She explains that after disabling Manhunter, she confronted Red Hood in the alley with her backup phone (after he shot her main phone). He says that in theory, he agrees with a systematic, lethal approach to crime-fighting. But he knows that Leviathan has vast access to information, and is playing them all against each other. With a pointed question about father-child relationships, Hood leaves Lois with the final question: Where is Amanda Waller, the lynchpin of the entire superhero and intelligence world.

In the Fortress, Robin finds the spy device Amanda Waller left (see our breakdown of the events leading up to the story here). Green Arrow tells the listening Waller that all of this destruction and death happened on her watch.

In the desert, Waller shoots her receiver to prevent tracking, then walks out of her room to find Leviathan waiting. Just as Waller and Leviathan (and a huge army of Leviathan troops) are about to start shooting, Superman descends, asking, “Are these men bothering you?”

Analysis: Brian Michael Bendis and Alex Maleev’s first big event for DC Comics arrives at its midpoint with a slight uptick in action and revelation from the first two chapters. While the somewhat frustrating structural device of the flashback continues from those first chapters, showing us a frenetic though somewhat confusing action sequence of the Red Hood making fools of his pursuers flashing back to last issue’s cliffhanger, the last few pages of this issue provide a very enjoyable tease for the next events. Hopefully, even if Bendis chooses to show Waller, Leviathan, and Superman’s confrontation in flashback, it will progress the action a bit further than the Jason Todd red herring (pun fully intended).

Though Maleev’s art continues to be drenched in atmosphere, from the grittiness of the flashback fight, to the coolness of the Fortress of Solitude, to the dry heat of the desert, Bendis writes a fairly breezy, chirpy installment for his mystery thriller. As a longtime fan of characters like Manhunter, Amanda Waller, and Lois Lane, seeing them all interact as Bendis writes them is definitely a fun part of this event, but isn’t quite as central to the plot as I might hope. Nonetheless, the event continues apace, and Batman and his family play a very central role in this chapter. The teaser for the next issue promises that Batman and Superman may come to blows soon, but so far, the cause of that conflict remains unclear.

Maleev provides the main cover, showing Leviathan’s face hovering above Batman battling his goons – not a particularly relevant image to this comic’s events so far, but reasonably appealing. Jay Anacleto’s variant hints that Leviathan may be a mask for a bigger villain, something Waller hints at in her confrontation at the end of this issue.

Final Thoughts: Bendis and Maleev’s event begins to heat up at the halfway point, with our heroes getting closer to a confrontation with their foes.