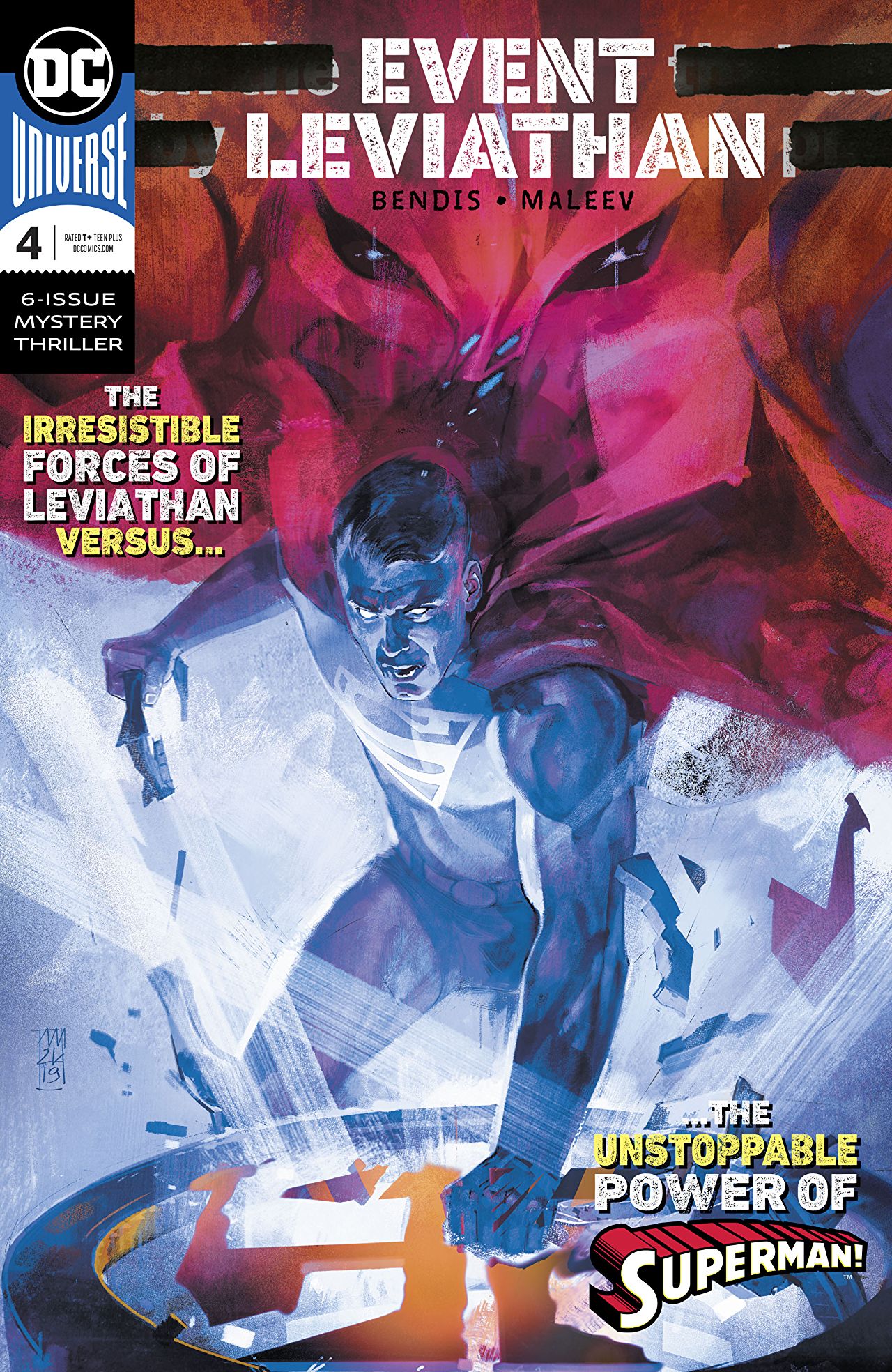 Synopsis (spoilers ahead): Superman struggles to shake off his encounter with Leviathan, as the Question (Vic Sage), Batman, Plastic Man, Green Arrow, Manhunter, Lois Lane, and Robin (Damian Wayne) try to catch him up on their group’s efforts. Superman asks to speak with Batman and Lois alone, irritating some of the others, and then reveals what happened in Cuba an hour ago. He found Amanda Waller alone, facing off against Leviathan and a large number of troops. He was unable to see through Leviathan’s technological disguise, and even though prepared to react in super-speed for Leviathan’s energy surge, was not able to stop them from using their strange teleportation effect.

In the next room, Manhunter and Green Arrow face off about their exclusion. Manhunter says that Leviathan deliberately set her up as a suspect, and as Batman, Lois, and Superman rejoin the group, they continue to theorize about what is happening and why.

Silencer, a former assassin for Talia al Ghul’s iteration of Leviathan, notices Lois as she speeds away from the meeting in her “borrowed” car (from Batman). As Batman and Superman bicker about the car she borrowed, Batgirl finally makes contact (she disappeared in the second chapter of Year of the Villain #1). She reveals that Leviathan still has her, and she’s playing along to try to win from the inside. Superman and Plastic Man fly to try to get to her, but the energy effect hits Seattle before she can reveal who Leviathan is.

As Lois pulls up in Bruce’s car, she discovers a second group of detectives has been working on the same problem – this one including the Elongated Man (Ralph Dibney), John Constantine, Harvey Bullock, Zatanna, Deathstroke, and the second Question (Renee Montoya).

Analysis: Though Brian Bendis and Alex Maleev continue to work with the flashback structure which has robbed their “event” of a strong sense of forwarding momentum, the revelations and character interactions in this chapter hold the reader’s interest.

In addition to some creative storytelling in Superman’s confrontation with Leviathan, the renderings of the characters continue to drip with mood and atmosphere. If they’d titled the series “Mystery: Leviathan,” expectations probably wouldn’t be quite as dashed – and to be fair, the advertising for the event is “mystery thriller.”

Bendis gives all of the characters some fun interactions highlighting their characters – even if his voices tend to sound the same, he does like to reveal characters through relationship and history.

The revelation of a second team of detectives at the end of the book is quite exciting, especially in the strange parallels seen – the second Question, another shapeshifter (Elongated Man to Plastic Man), Deathstroke as a dark shadow of Batman, Harvey Bullock to Lois’s civilian investigator, and the addition of two magic users, Zatanna and Constantine. The appearance of Batgirl after her disappearance in the spring teaser issue also gives readers a sense of moving forward, even if she doesn’t really provide much new information. Hopefully, in the two remaining issues, the teams will coalesce and find a satisfying solution to the mysterious and hyper-powerful foe that’s unleashed such terror in just one day.

Alex Maleev’s main cover shows Superman desperately ripping a piece of Leviathan technology apart, while the Leviathan mask looks above him ominously. The image serves as a nice emblem of Superman’s attempt to save Amanda from Leviathan’s clutches and fits a bit better than Kaare Andrews’ variant of Leviathan holding a beaten Batman and Green Arrow. Though a dramatic image, nothing even close to this image appears in the comic.

Final Thoughts: At the two-thirds mark, Event Leviathan starts to have a sense of forward, rather than entirely flashback, momentum, with an entertaining and twisty entry.