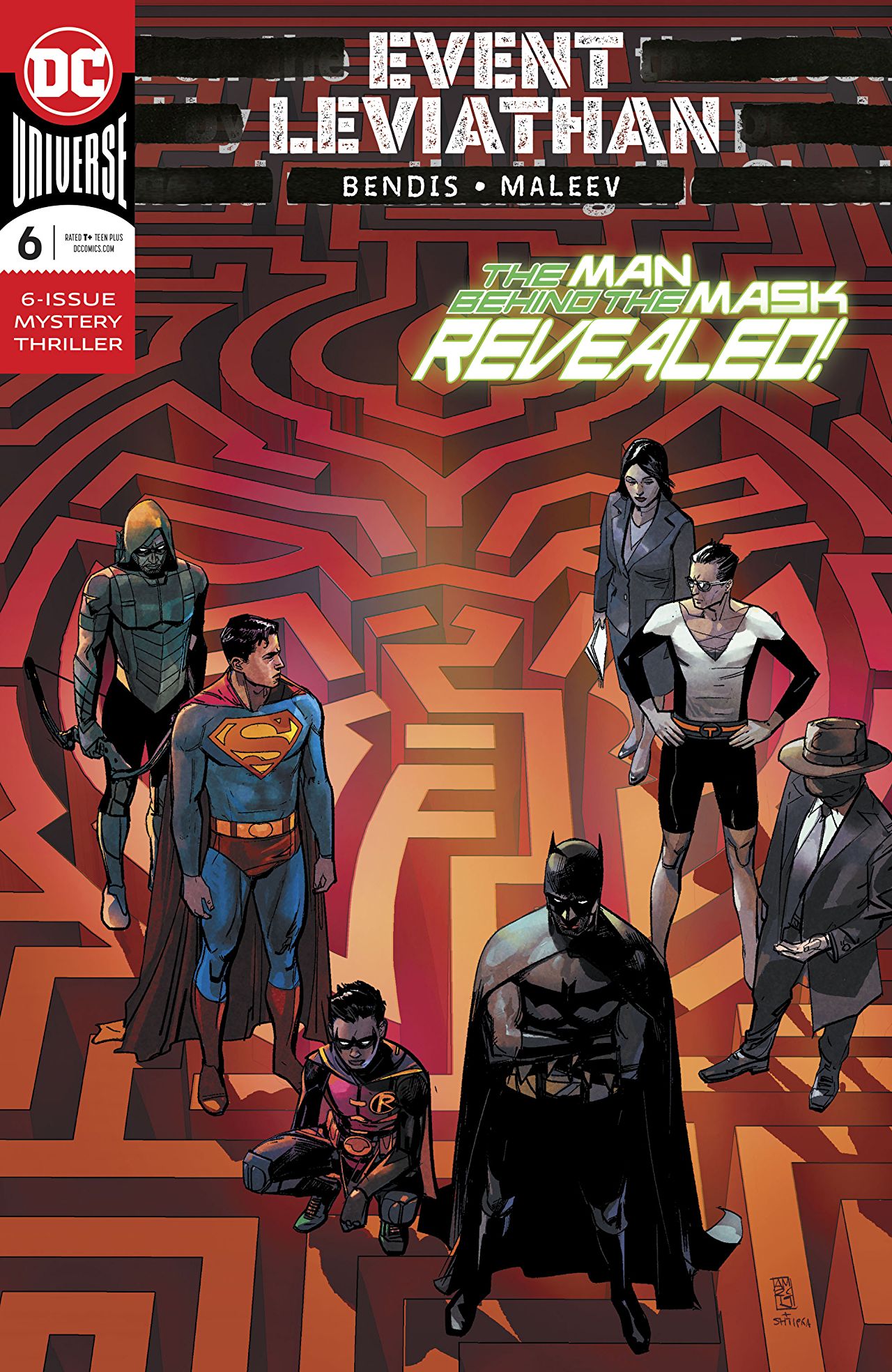 Synopsis (spoilers ahead): Over images of Leviathan’s mask, narration ominously reveals that Manhunter is Leviathan, and Manhunter has taken over the world.

Lois Lane types her story, pausing as she remembers her father’s death. Green Arrow bursts in, but Superman overshadows him as he super-speeds in and embraces his wife. Clark asks for a moment, tries to comfort Lois, but she insists on hearing about Manhunters.

Three hours ago, Kate Spencer, the most recent Manhunter, faces Talia al Ghul and her enforcer Silencer, as well as her distrustful teammates. As Kate panics and attacks her teammates in flashback, Superman narrates to Lois the Manhunter history. Originally similar to the Green Lantern Corps, they brought order to the galaxy, until they were rendered obsolete by other heroes. The Manhunters came to earth to free humanity from the chaos it created.

Batman and Robin begin conversing in sign language to prevent being overheard. The other detectives join in, but just as they start to work out a plan, Lois’s second team arrives. Zatanna quickly transports them all to the Batcave.

Superman finally tells Lois the identity of Leviathan – the Manhunter who took Sam Lane’s analysis of Earth’s chaotic intelligence agencies and used it as a road map to take over the world – Mark Shaw. As Shaw revealed his identity to make one more attempt to recruit Superman, Plastic Man frees Superman from Shaw’s trap, and Batman and his team (including Batgirl, who had infiltrated Leviathan) arrive, having traced the bugs in Kate Spencer Manhunters’ gear. Though the combined strength of the heroes defeats Leviathan’s army, Shaw himself escapes. Batgirl reveals Shaw’s ultimate plan – to release every single secret in the world at the same time. However, she also reveals that Amanda Waller gave her the piece of technology required to stop that plan. As the heroes in the flashback bicker about what to do next (including Green Arrow taser arrowing Talia, much to Robin’s chagrin), Lois insists that the main story is done – Leviathan’s identity and his main plan. Perry White concurs, despite the dozens of other stories still to write, and Lois publishes the truth about Shaw and his plan.

Meanwhile, as Shaw reads the Daily Planet, the hero Guardian approaches him and says he still has followers. Enraged, Shaw plans to burn Earth to the ground now that his attempts to fix the chaos have failed.

Analysis: After the last two issues promised more direct action, Brian Bendis returns to the frustrating flashback narrative device that slowed the first half of this “event” miniseries to a crawl. Worse, he chooses to reveal the main villain’s identity without really setting up the emotional consequences, so that Kate Spencer’s connection to the villain falls completely flat (though hopefully to be continued in a followup miniseries or ongoing by Marc Andreyko, Spencer’s creator). These two problems pale in comparison to the fact that Leviathan’s plan is literally revealed and thwarted in one page – so the readers have absolutely no fear that it will ever happen. The massive displays of power in which Leviathan kidnaps entire buildings full of spies were much more exciting than this frustrating rug-pull of a plot point.

In addition to these problems, Bendis’s voices remain far too similar to his default writing voice and stray from clearly established verbal patterns. For example, Damian calling Talia “mom” and Talia responding “sweetie” makes Damian and Talia sound exactly like Jon and Lois. Even Tim Seeley, who loves to show Damian playing video games and other more “normal” kid activities, has that Damian always calls Talia “Mother” – capital letter included. Bendis’s default writing voice is polished and entertaining, but it’s disappointing that neither he nor his editors pushed him to capture more of the character’s traditional speech patterns.

Alex Maleev’s art remains very appealing, though in service to a story that literally exists just to set up the next arc of Action Comics. Honestly, it’s frustrating that Maleev and Bendis didn’t just write this arc as the last six months of Action Comics, as nothing about the story really justifies the “Event” part of the title. Even the aforementioned mass kidnappings never really develop into a serious threat, despite Maleev’s terrifying renderings of them.

Maleev’s main cover is very interesting, and the use of the maze imagery forming Leviathan’s mask is a nice parallel to the content inside. However, it lacks some of the polish of his previous covers. The Bryan Hitch variant cover, while a bit more generic, is more finished.