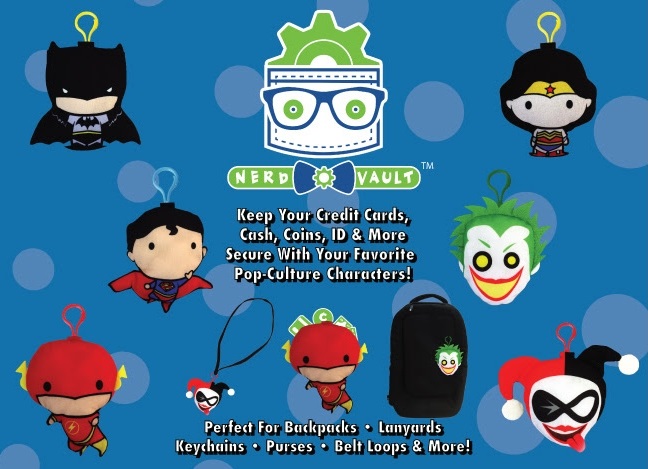 Toy Fair is about more than just toys as some companies are using the event to showcase other geeky items, such as Factory Entertainment which has revealed a couple of Batman-themed accessories for the fashionable Bat-Fan. Figures.com has revealed two sets of items, the first is a collection of wallet-type items called Nerd Vaults. Shaped like your favorite characters, the pouches can carry your cash and cards for easy access and attach to belt loops or lanyards. I can foresee these being a very popular item to wear at conventions. The first batch features Batman, Superman, The Flash, Wonder Woman, Joker, and Harley Quinn and retail for $5.99. Look for them this summer. The second set of nerd swag Factory Entertainment is releasing is for all the techies out there: virtual reality headset skins. A four-pack costs $9.99 and features themes such as DC Comics Pixel Art, DC Comics Chibis, and DC Comics Blueprints. There are plans for more superhero themes in the future but the first bunch will be available this summer. What accessories do you most want to see with a coat of Batman paint on top? Let us know in the comments!