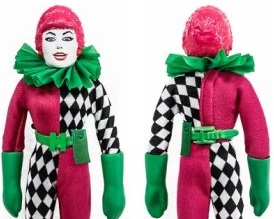 Duela Dent, for those unfamiliar, first appeared in classic Teen Titans comics as a character calling herself the Joker’s Daughter. Over time she has claimed to be the offspring of multiple Batman villains, finally being revealed as Duela Dent, daughter of Two-Face. In Teen Titans #48 she changed her identity to Harlequin. As Harlequin, Duela utilized gimmicks such as smoke-inducing powder puffs and bullet-firing lipstick. The figure appears to be an eight-inch Mego-style figure. She comes dressed in her classic Harlequin costume. While her sculpt doesn’t exactly match the comics, this is definitely a figure that will add a wonderfully retro feel to any collection.