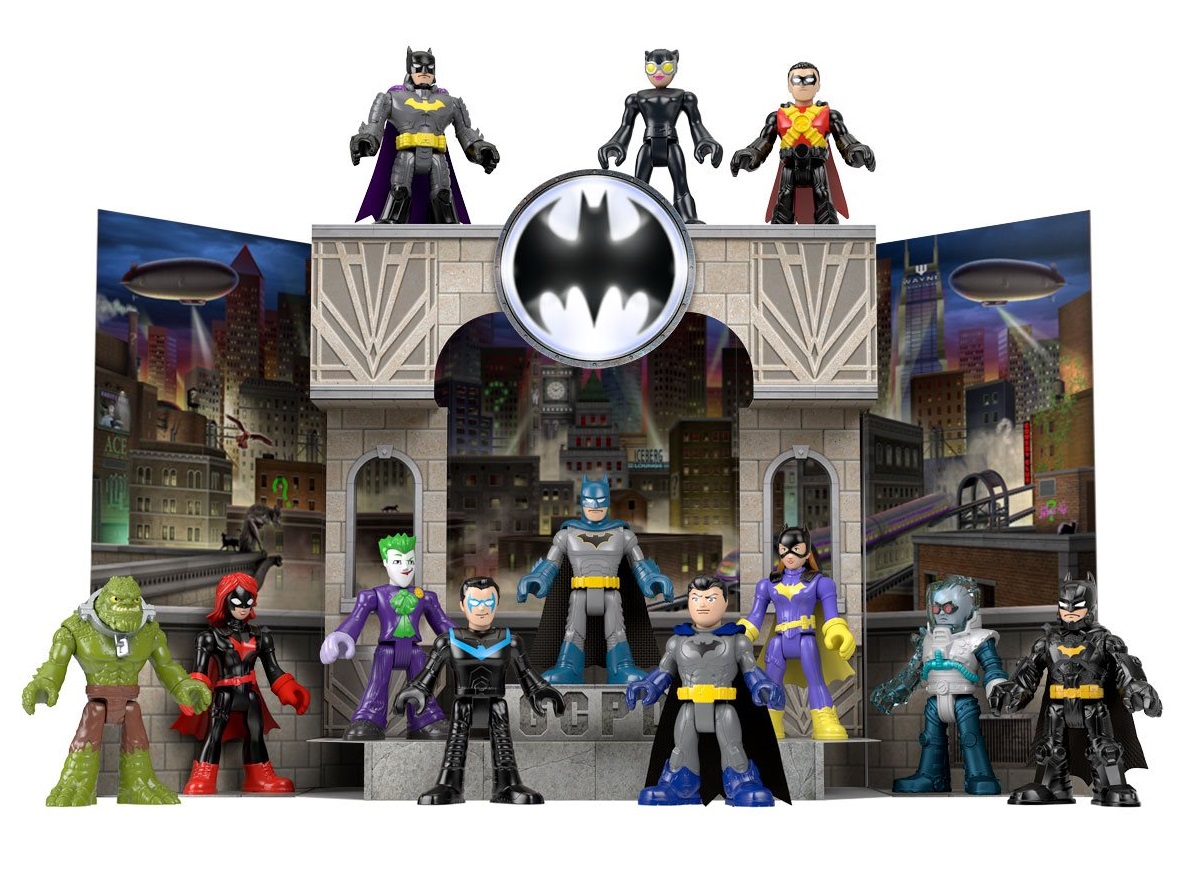 A number of new items have popped up on Entertainment Earth from Fisher-Price’s Imaginext line. Some of these items have been available before now, but the items becoming available through Entertainment Earth makes them a little easier to track down. Some of the new items include figures, playsets, and vehicles, which feature many characters from the Batman Universe. Details are listed below. They are expected to ship between July and August 2020. You can preorder the items by following the links below. Young DC Comics fans (and older ones, too!) can celebrate the 80th anniversary of the creation of Batman with this special anniversary edition Imaginext DC Super Friends figure 5-pack. This incredible figure pack commemorates 5 iconic looks of the Caped Crusader, from his first appearance in Detective Comics #27 and the Rainbow Batman of Detective Comics #241, to his Yellow Lantern look from Forever Evil #4, kryptonite Batsuit from Superman/Batman #23, and an unmasked Bruce Wayne from Detective Comics #345. This incredible box set is a must-have for any Batman fan.
Price: $19.99
Preorder at Entertainment Earth Kids can help the Caped Crusader protect the streets of Gotham City with this Imaginext DC Super Friends figure and vehicle set featuring Batman and his fully loaded Rally Car! Roll the vehicle to patrol the streets. With villains in sight, load the hidden disk launcher under the hood, then turn the Power Pad to send the projectiles flying. Super-Villains are no match for your little crimefighter.
Price: $15.99
Preorder at Entertainment Earth When Super-Villains run amok, Batman takes to the skies in the Imaginext DC Super Friends Batwing! Kids can place the figure in the plane’s cockpit, then squeeze the trigger to open the fabric wings. With Super-Villains in sight, push the Power Pad to launch disk projectiles and send the bad guys running for cover. Gotham City is safe with your little crimefighter on the lookout!
Price: $29.99
Preorder at Entertainment Earth Young crimefighters can unbox and act out their own action-packed Batman adventures with the Imaginext DC Super Friends Gotham City Pop-Up Playset from Fisher-Price. Kids can open the secret doors of the playset to discover the 3 mystery figures and 2 play accessories hidden inside. Then unzip and pop up the double-sided playset to set the stage for awesome Super Hero versus Super-Villain action in downtown Gotham City on the front or down Park Row in the back. With 4 sets of character figures to collect, there’s no telling which surprise mystery figures kids will find inside! Imaginext Imagine What’s Next!
Price: $14.99
Preorder at Entertainment Earth Kids can create exciting adventures with The Joker and this Imaginext playset loaded with villainous action! The Joker, iconic Super-Villain of Gotham City, plans all his devious attacks from his evil lair, the Laff Factory. Power Pads bring all the action to life, including a spinning rocket ride, “swimming” fish in the dunk tank, projectile launchers, and a spinning elevator! Kids can create exciting, villainous adventures with Batman’s foe and this action-packed playset.
Price: $29.99
Preorder at Entertainment Earth When supervillains start to wreak havoc on the streets of Gotham City, Batman races into action in his Batmobile. Now, young superheroes can create exciting adventures with Batman and this sensational transforming, remote-controlled Batmobile! Kids can use the remote control to send the vehicle zooming forward, backward, and spinning around. Then turn the Power Pad to watch the car transform into battle mode with awesome lights, sound effects, and projectiles! Evildoers don’t stand a chance against the Caped Crusader and this fully loaded DC Super Friends Imaginext Transforming Batmobile R/C Vehicle, so order yours today!
Price: $79.99
Preorder at Entertainment Earth Kids can create all sorts of zany, action-packed adventures with this Imaginext DC Super Friends figure and vehicle set featuring iconic Super-Villain The Joker. As The Joker rolls through the streets of Gotham City, press the Power Pad to swing the wrecking ball back and forth. If Batman tries to stop him, The Joker can trap the Caped Crusader in the vehicle’s front wheel!
Price: $15.99
Preorder at Entertainment Earth Batman patrols the shores of Gotham City in his fully loaded Batsub. When K. Croc swims into town and tries to launch an attack, Batman races into action. Using the Batsub’s claw, young crimefighters can capture K. Croc, trap him in the cage and help Batman tow the Super-Villain to jail. Kids can recreate their favorite DC Comics stories, and imagine new ones of their own, with this Imaginext DC Super Friends Batsub vehicle and figure set from Fisher-Price. Imaginext Imagine What’s Next! (Not intended for use in water.)
Price: $24.99
Preorder at Entertainment Earth