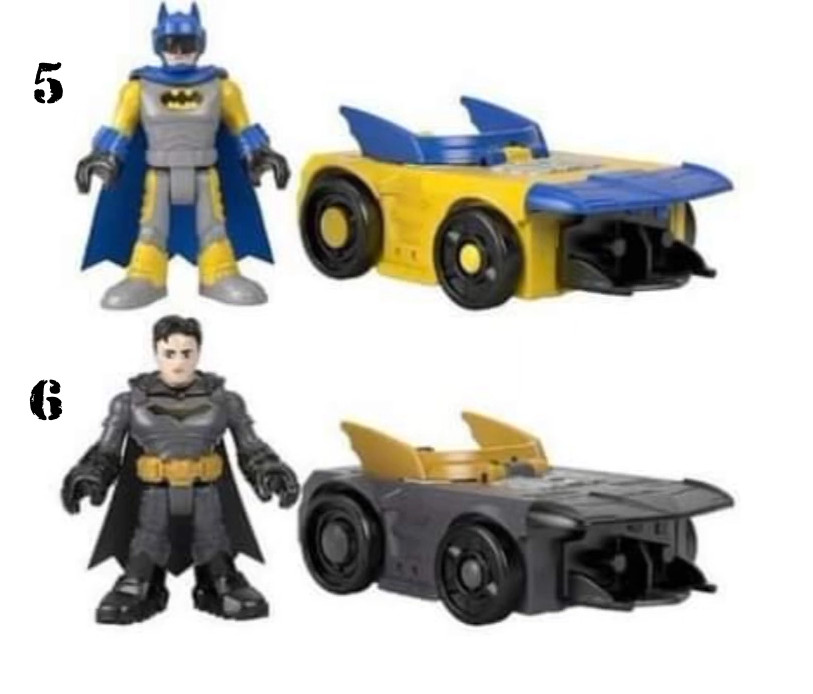 There are some new images that have appeared online featuring the next wave of DC figures as part of the Fisher-Price Imaginext Slammers. The first wave released last year and features variations of Batman, Joker, Harley Quinn, Mr. Freeze, and even a Cassandra Cain version of Batgirl.

While there are no details on when exactly the second wave will release, these first images reveal some of the characters that fans can expect. As with the first wave, there are plenty of Batman variations as part of the second wave of Fisher-Price Imaginext DC Slammers. Let’s take a look at the figures coming.

It is worth noting that the images are not the best resolution, but using the color schemes and knowledge from the Batman Universe, we will do our best to figure out the characters. Analyzing the figures by using the numbers we associated in the images, we can assume that the first figure is Batwing. The second figure is a new variation of the Barbara Gordon Batgirl. The third and fifth figures are new Batman variations, while the sixth figure is an unmasked Bruce Wayne. The fourth figure is a new version of Signal.

Diving into the next group of figures, there are two new variations of Bane with the seventh and eighth figures. The eighth figure is reportedly also a glow-in-the-dark figure to give the look of venom pumping through Bane. The ninth figure rounds out the Batman Universe characters with a new version of Poison Ivy.

The other figures as part of the wave include a new Superman, a new Supergirl, and the first appearance of what appears to be the Calvin Ellis version of Superman for the twelfth figure.

The vehicles that are part of the wave are pretty standard overall with nothing really unique or worth mentioning. If anything, you are aiming to get these for the figures and not for the vehicles.

As mentioned, it is unknown exactly when these will hit stores, but if we had to take a guess, it will be late summer 2021. In the meantime, you can purchase some of the figures from the first wave over on Amazon.