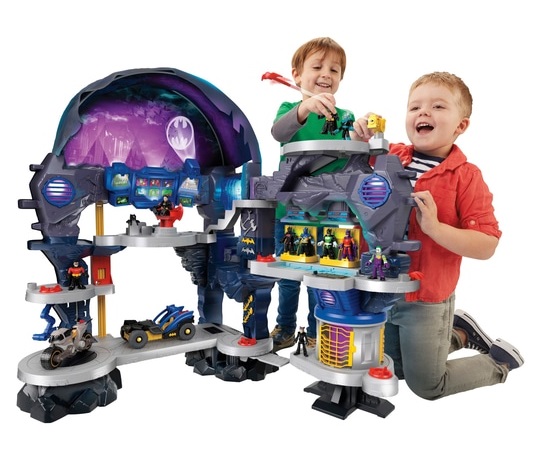 Fisher-Price has released details for their latest Imaginext DC Super Friends playset which was first revealed at New York Toy Fair this past February. The Super Surround Batcave playset includes Batman, Robin, Joker, Catwoman, and Mister Freeze and features multi-color LEDs, eight tool accessories, one removable projectile launcher and four projectiles, and the bat signal. It is priced at $149.99 and is expected to land in stores Fall 2020. Check out the pictures and details below courtesy of MyGrodd. You can preorder the set now at Entertainment Earth.

Young crime fighters can surround themselves with lights, sounds, Super-Villains, and lots of cool gadgets with the DC Super Friends Super Surround Batcave playset from Fisher-Price. Kids can help Batman and Robin prepare for battle and complete missions from this awesome interactive control center, which features more than 200 sounds and character phrases, multi- colour lights, and 5 exclusive Imaginext figures! Featuring three ways to play, the playset can prompt kids’ play with security checks from the Batcomputer, super-fun adventure starters featuring some of the biggest baddies, and breaking news about what’s happening in Gotham City. Watch out, The Joker. Batman and his young crime-fighter apprentice are sure to get the last laugh this time. Imaginext Imagine What’s Next!