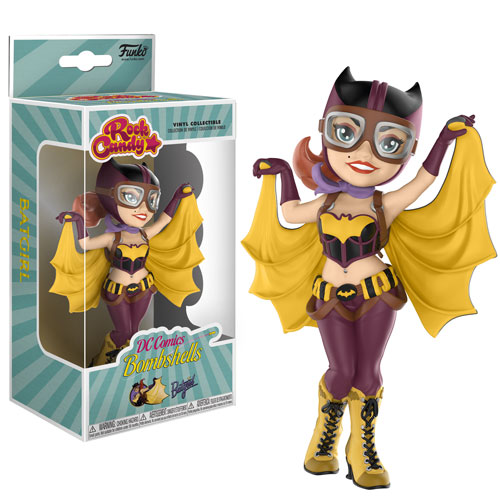 The folks at Funko are at it again! This time around they are announcing some amazing Bat-goodies to excite all the amazing Bat-fans out there. First up is a new Rock Candy Batgirl based on the Bombshells line from DC.  Batgirl is suited up in her flight gear and ready to take on all enemies!  A sepia-colored variant will be available exclusively at Hot Topic. Next up is the Vynl figure 2-pack featuring that most famous of purloining pairs–Harley Quinn and the Joker.  Harley appears clad similar to her Batman: the Animated Series costume and the Joker sports one of the most mischievous/malicious grins possible. Finally, the last entry is from the Pop! Line of figures.  The newest Batgirl from them is an 8-bit styled figure.  This 8-bit Barbara Gordon Batgirl comes in both her classic comic blue and gray costume, as well as a Barnes & Noble exclusive featuring the stunning purple suit as worn by Yvonne Craig in the 1960’s Batman television series.

All of the items are expected to release this coming January. Which ones are you excited for?