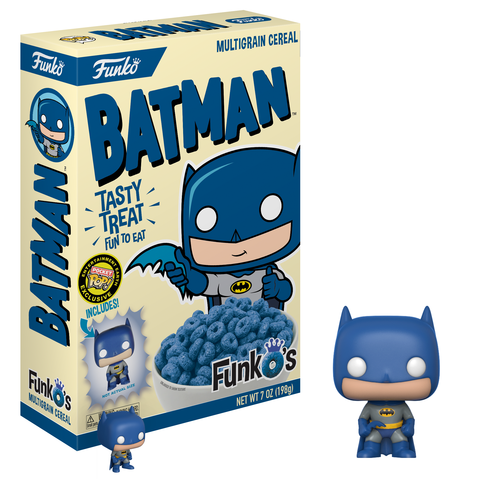 Well, it may not be the wonderful joy of finding a Batman toy in your cereal box, but it’s the next best thing. If you were unaware, Funko has started to create unique cereals that are themed around different popular characters. They have announced the second wave of the cereal line and it includes both a Batman cereal and a Batgirl cereal. Each come in themed boxes, with corresponding color cereal, and an exclusive miniature Pop figure.

These are typically priced at $9.99 per box. Both boxes of cereal will be exclusive to Entertainment Earth. You can pre-order the Batman cereal and the Batgirl cereal now. It is expected to ship next month. And don’t worry, just because it is sold as a collectible, doesn’t mean you can’t just eat the cereal too! The Dark Knight might have his hands full rescuing Gotham City from his numerous and colorful Rogue’s Gallery of Super-Villains, but he’s never too busy to start his morning with a good breakfast. Batman FunkO’s are dark blue and each box includes an exclusive Batman Pop! – ready to defend your breakfast table! Gotham City’s favorite Super Heroine Batgirl is pulling double duty to protect this cereal box of royal purple FunkO’s. Her dynamic style is a perfect match for any breakfast, and because each box comes with an exclusive Batgirl Pop!, you’ll have plenty of opportunity to reenact your favorite Batgirl adventures at the table.