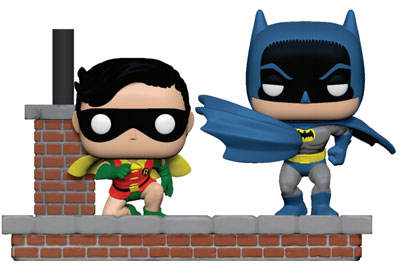 Holy Funko Pops, Batman! The Caped Crusader is getting all sorts of Funko love for his eightieth anniversary. Funko shared a variety of new Pops at the London Toy Fair that will release in honor of Batman’s birthday.

On display were Pops based on the 1989 Batman film (also celebrating a milestone itself with its thirtieth anniversary), as well as some very classic looks (including one based on Batman’s first appearance), and what looks like otherworldly variant in Owlman! The Batman and Joker set from the 1989 movie features details fans of the film will truly enjoy, while the 1972 Batman and Robin pairing just screams “classic Dynamic Duo!”

This truly looks like 2019 will be the year for Batman Pops, folks! Full details below along with pre-order links from our friends at Entertainment Earth.

The Dark Knight is turning 80 and all of Gotham City is celebrating its favorite DC Super Hero from Wayne Manor to Arkham Asylum. DC first introduced Batman in Detective Comics #27, released back in 1939. Since then, Batman has appeared in countless comics, video games, television episodes (animated and live action), movies, battled epic Super-Villains and become a cornerstone of pop culture. Celebrate 80 years of the Dark Knight with a Pop! depicting 1939 Batman illustrating the evolution of the Super Hero’s look over the decades. The 1989 Batman Pop! offers a more modern interpretation of the Batsuit.