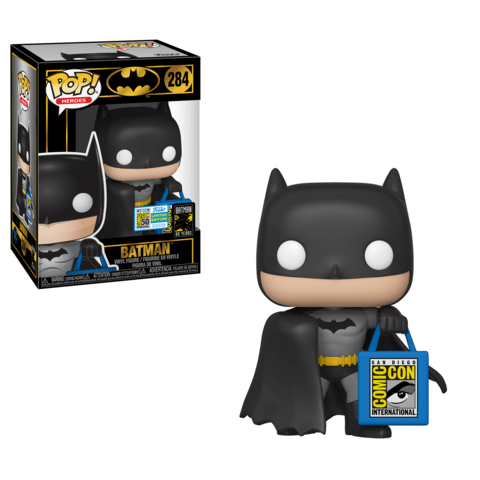 Funko has announced several POP! figures that are exclusive to SDCC 2019. Believe me, Bat-Fans, these are going to be some popular items this year. Their first reveal is a San Diego Comic Con themed Batman Batman Pop! figure. This figure features Batman carrying a San Diego Comic-Con bag. It could almost be mistaken for a trick-or-treat Batman, but this is by far one of the cooler variants of Batman available this year. Next up is the exclusive teal chrome Pop! Batman. This GameStop variant is sleek and metallic looking, all in a teal green that will stand out in any collection. Sometimes the Dark Knight looks pretty good in a shiny sheen. Finally, we have something a little more unique.  The recently-ended television series, The Big Bang Theory, connected with comic book culture a lot, and Funko decided to celebrate both this show and Batman’s 80th anniversary in one fell swoop.  The San Diego Comic-Con exclusive Pop! Howard dressed as Batman, Pop! Leonard as the Green Lantern, Pop! Penny as Wonder Woman, Pop! Raj as Aquaman and Pop! Sheldon as the Flash which are all based on the costumes worn by the characters in the show in order to compete in a costume contest at a local comic shop. If this doesn’t embody the spirit of SDCC, I’m not sure what really does. There will also be an exclusive shirt available featuring all of the Pop! versions of the characters in their costumes. these items are all Walmart variants for the convention. The Pop! figures will be priced at $15 each with the Pop! Tee being priced at $20. No word on quantities for each item, but expect these items to be quite popular.