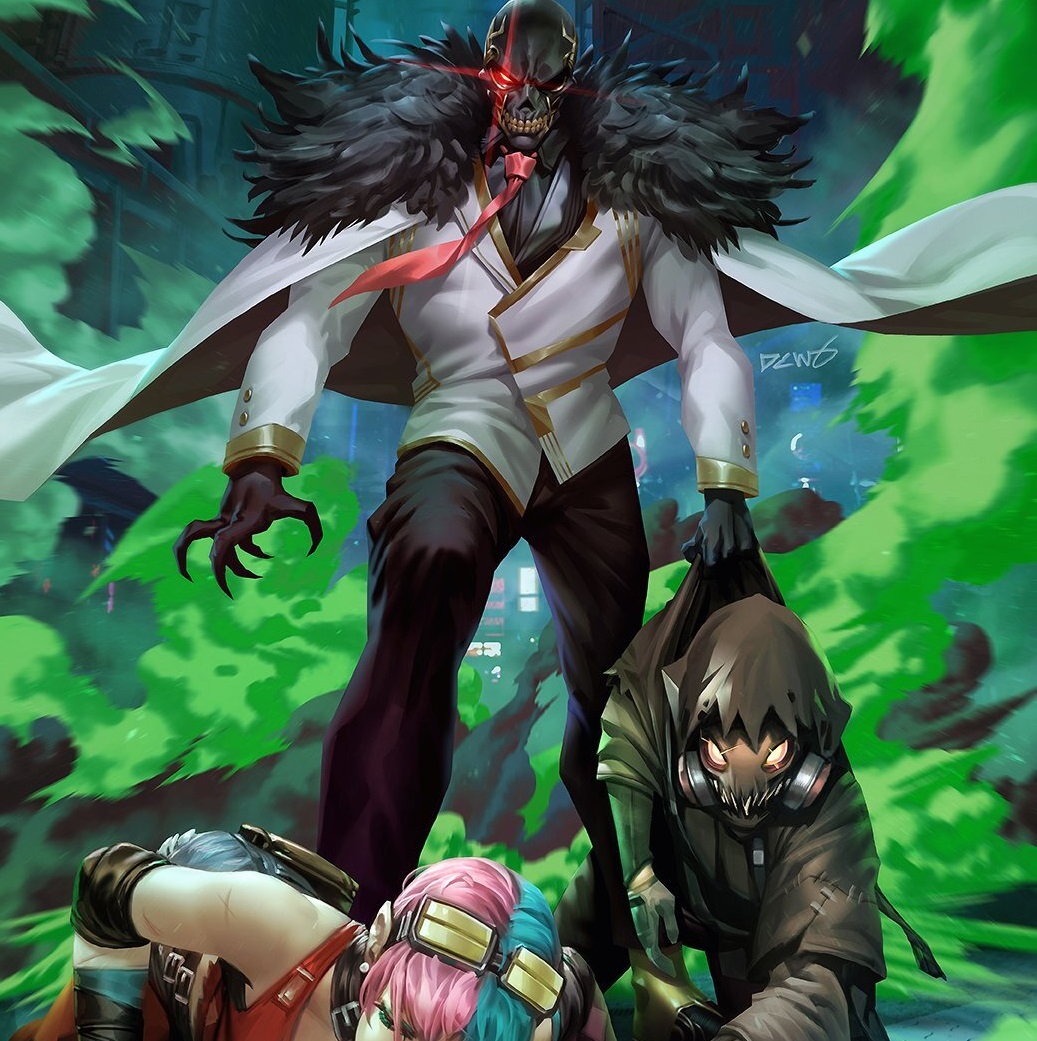 Overview: Harley Quinn releases the full terror of the Scarecrow on Black Mask before besting them both. She then recedes into the Future State Gotham night.

Synopsis (spoilers ahead): At a steak dinner, an older man is bragging about how “his” task force captured Professor Pyg. He begins to choke. Black Mask joins the party and assures the man, named Senator Hanssen, that the dose of succinylcholine in his food was intended to cause paralysis, not death. He takes out a knife and, holding it to the senator’s face, explains that he is not angry that the senator took his money. Black Mask is angry because the senator created a fraudulent account that funnels the money directly to the Magistrate.

Time jumps forward, and Harley, Dr. Jonathan Crane, and law enforcement are examining the crime scene. Harley and Crane confirm that Roman Sionis (Black Mask) has indeed cut off the senator’s face, and Crane demands that Harley explain how to catch Sionis. Harley obliges, suggesting that Black Mask might be afraid of none other than Scarecrow. Crane refuses to don any mask, and Harley demurs before throwing at Crane a discarded “Black Mask” mask worn by one of Black Mask’s thugs. She explains that Crane should check out the factory where these masks are made. Crane and the Peacekeepers do so, but the latter activate a sentry droid that decimates the force. Crane is furious with Harley, but his remonstrations are interrupted by a hologram of Black Mask, who mocks Crane both for partnering with Harley and for being rather behind. Black Mask assures Crane that he will take back Gotham and kill them both.

In the next scene, Crane is alone in his office with a whiskey and the Scarecrow mask on his desk, muttering that he “can’t” and that “a mask is afraid of a mask.” A Peacekeeper enters to inform Crane that Sionis has been sighted at the docks and asks Crane what he is doing with the mask. A sweating Crane throws the glass at the man, screaming at him to get out. Crane proceeds to trash his office, chanting the names “Black Mask,” “Harley Quinn,” and “The Magistrate.” With the Scarecrow’s shadow reflected on the wall behind him, he makes his decision and dons the mask, ready to end the affair “his way.”

Free of all bondage, Harley is blissfully reunited with her “Bite Me” bat down at the Gotham Docks and puts it to good use via some wanton property destruction. She calls for Roman, and he obliges by appearing and then mocking her as bait. He demands Crane come out to face him, and out of the darkness, a voice asks Black Mask how it felt to be alone in the dark as a child. Green gas begins to swirl around Black Mask, and the art switches to Roman, crying out in fear from insects burrowing under his skin. Crane reveals himself as Scarecrow equipped with fear toxin, and Black Mask pulls out his gun and starts shooting while fleeing the scene. Black Mask proclaims that the fear gas won’t work on him, and Scarecrow begins to respond until he is cut short by a baseball bat to the noggin. Black Mask thanks Harley for the assistance and begins monologuing, but with her trusty bat, Harley shuts him up too. His mask cracked, Black Mask staggers, and Harley then dons Scarecrow’s mask, finds the release for the gas, and turns it full blast on Black Mask, who is rendered helpless with fear. Harley strolls off. Two Peacekeepers find Crane coming to, and Black Mask is being loaded into an ambulance on a stretcher. Crane marvels that Harley has managed all of this, and he proclaims that she has ruined him. Walking away into the night, Harley is disgusted by the smell of Scarecrow’s mask and discards it, noting that she never did like masks.

Analysis: In my view, wrapping up an arc in a two-shot is difficult. The narrative is not bounded neatly to a single book, but it is also not possible to layer the way a writer can in a full comic miniseries. So, the two-shot exists in a sort of liminal state, and even a terrific first issue is hard to carry over in ending the arc in the second issue.

There remain many strengths to Future State: Harley Quinn. Our antihero herself is chock full of awesome, and I love the portrayal of her as hyperintelligent, funny, and playful, but with a hint of menace lurking behind the wordplay. She has earned her freedom, and it is apparent that she means to use it. She has Crane dangling on her line and they both know it; he needs her crime-solving prowess to catch Sionis. Harley knows just how to tip Crane over the edge – in an ironic homage to Batman himself, he must don the mask to catch the rogue. But unlike Batman, of course, when Crane gives in to the pull of the mask and does so, it ruins him. Or is this in fact just like Batman?

At the climax, Scarecrow’s attack on Black Mask is confusing. He begins with his fear gas, which is clearly having a potent effect. Yet the dialogue has Black Mask denying that the fear gas will affect him, which is a strange thing to say for a character who has already been beset with terrors from the effects of the gas. Indeed, Harley will subsequently dose Black Mask, and it again proves extremely effective, so it is unclear why Mask would stop in the midst of the first attack to proclaim that it was not working. It did work!

The art continues DC’s recent trend of pairing artists on books, which, as our fearless leaders on TBU Comic Podcast have explained, is likely driven in part by the pressures on the artists of having to produce multiple books in increasingly shorter periods of time. While Future State: Harley Quinn #1 featured only Simone DiMeo, she is joined by Toni Infante in this issue. It works well enough; DiMeo’s Aeon Flux-y Quinn has grown on me, and there are no noticeable rough transitions between the two artists. The scene where Crane gives in and takes up the Scarecrow mask is particularly effective, as I always appreciate the motif of the shadow monster on the wall.

While Future State: Harley Quinn #2 is not quite as exciting as the first book in the series, I maintain that it is very difficult to write a two-shot. Stephanie Phillips is to be credited for her insistence on a powerful, intelligent Harley who is more than capable of toying with and then discarding some of Batman’s lesser rogues. Even in the Future State, Harley Quinn is a force of nature.