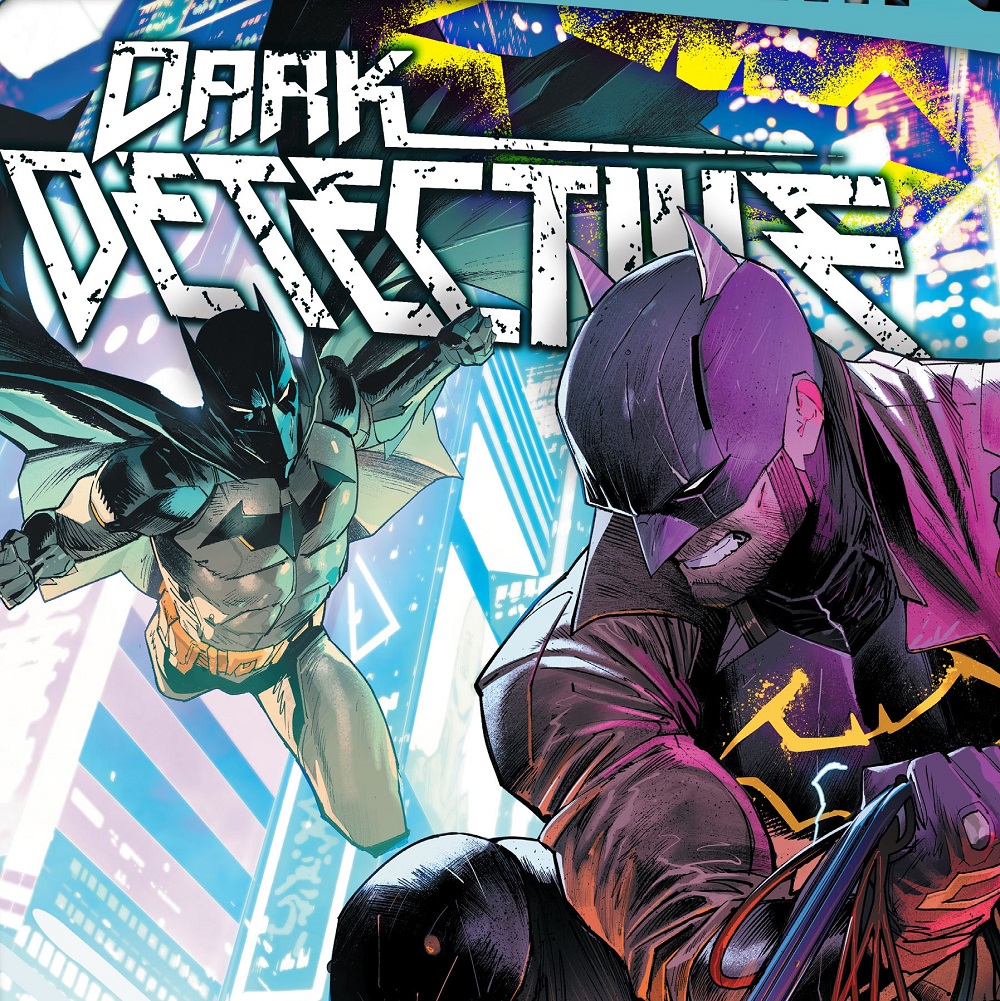 Overview: Bruce Wayne investigates the murder of Carl Bennington, one of the business dealers who manufactures equipment for the Magistrate.

Synopsis: PLEXITECH CEO Carl Bennington, one of the manufacturers of armor for the Magistrate, is found dead in his home. The Magistrate officially suspects the murder is connected to vigilantes, but Bruce Wayne, who is digging deep into Bennington’s assets as part of his investigation of the Magistrate’s money trail, suspects otherwise. Bruce notes that Bennington set up a shell company, known as CB Enterprises, to sell surveillance tech to foreign buyers. Through this avenue, Bennington used his other business with the Magistrate, the development of micro-surveillance through nano-drones, to expand his industry. It was this surveillance knowledge more than his greed that got Bennigton killed, Bruce surmises.

Atop a skyscraper in Gotham City, Batman fly-fishes for nano-drones. After catching a few, Magistrate security drones find his location and open fire upon Batman. Batman flees, taking down a couple of security drones in the process. In an alley, he’s stopped by Tim Fox, the Next Batman. The two exchange terse words, wherein the Next Batman warns Bruce that he’s going to get hurt.

Back at Noah’s, Bruce hacks into one of the nano-drones, which gives him access to the whole surveillance network. The drones are everywhere, spying on everyone in the city around the clock, both outdoors and inside people’s homes. Through this spy network, Bruce is able to find footage of Bennigton’s murder. Just as he suspected, Bennington was murdered by peacekeepers. Putting two and two together, Bruce hypothesizes that Peacekeeper-01 “murdered” Bruce Wayne in order to pilfer Wayne Enterprises of tech without Bruce in the way.

Hannah, Noah’s daughter, arrives to take down “signal blockers” Noah put up to keep aliens from spying on him. The neighbors have complained because the signal blockers are beeping quite loudly. On her way out, she chastises Bruce for encouraging Noah and also for being lazy.  Bruce notes that Noah says he’s hearing weird noises, which pushes Bruce to try out new infrared goggles he built from stolen Magistrate Cyber tech. From the roof of Noah’s home, Bruce can see through the goggles that Hannah is being pursued by Magistrate nano-drones. He follows her.

Bruce pursues Hannah to Magistrate headquarters, then has a thought to check back at Noah’s. He finds thousands of nano-drones at Noah’s, which leads Bruce to suspect that he has put the father and daughter in danger. Bruce grabs a bat and starts smashing as many drones as he can, noting that the Magistrate knows where he is and what he’s been up to.

Analysis: Future State: Dark Detective #3 continues the slow burn techno-thriller vibe that Mariko Tamaki and Dan Mora have worked together to craft in both moody, Noir-style internal narration and a cityscape that’s dirty, grim, and large enough to swallow the characters of this story whole. Their styles are wonderfully intertwined and in sync with one another. Jordie Bellaire provides the colors, and their work really highlights a beauty and almost-brooding serenity reminiscent of cyberpunk landmarks like Blade Runner.

Much like the source inspiration for this style of story, mood supersedes clarity in much of this issue, and though there is quite a bit of internal narration throughout, we’re only told information as we need it. This isn’t something Batman readers may be familiar with reading, but it doesn’t have to be. Tamaki and Mora have recreated Bruce as more of a private investigator with only his wits about him. Even his outfit is less Batman and more street-level detective, opting for a long, flowing coat over a cape and handmade armor.

In this issue, the Dark Detective and the Next Batman encounter each other for seemingly the first time. They exchange terse words, and Bruce describes the situation as akin to seeing a reflection in a mirror. This description is fitting, especially since Tim Fox’s Batsuit reveals no face within the mask, nor skin or semblance of the person beneath the guise. Though doing nothing for the actual plot of the story, the meeting emphasizes the mood of Future State: Dark Detective. This is a Bruce who has fallen and lives among the muck, trying to piece together what happened and why.

By the issue’s end, the plot forces itself to a final showdown with Bruce realizing that he’s being watched by the Magistrate everywhere. We can only hope the tone and style Tamaki and Mora have crafted work to lead us somewhere with a meaningful point to end on. That’s really been the only shortcoming thus far in this series — there hasn’t been a clear pathway that leads us to any greater theme or idea to take away from Future State: Dark Detective. The story is moody, beautiful, and tonally amazing, but behind the luster, where is the heart?

Story #2: “No Future Past 2” by writer Matthew Rosenberg and artist Carmine Di Giandomenico

Synopsis: The issue opens with Huntress taking down Grifter. The two spar, and throughout the fight, Huntress is furious that Cole Cash has brought Luke Fox here. She suspects Luke of being part of the GCPD, but he claims otherwise, offering to pay for Huntress’ services.

Huntress runs Luke’s payment card and transfers money into her account. Before they can catch a breath, they realize that they’re surrounded by Magistrate forces. An explosion halts the Magistrate from entering Huntress’ base. Meanwhile, Huntress, Grifter, and Luke Fox make a fast getaway on Huntress’ motorcycle.

Magistrate drones and air vehicles pursue the three vigilantes. Grifter sees some cans of explosives nearby and shoots at them, causing the lead aircraft to crash. Huntress takes them to another hideout, where Grifter is taken down by Veil, the Black Mask gang enforcer he fired at last issue. After offering to repay Veil the money he owed her, Grifter buys Huntress, Luke, and his own passage through the Gotham City sewers.

At their final destination, Huntress reveals an undetectable submarine that was built by Wayne Enterprises. It’s Luke’s ticket out of Gotham without being followed.

Just then, Magistrate forces descend upon the vigilante group, with a peacekeeper in tow this time. It’s revealed that Luke sold them all out, as he was tasked with turning in Huntress in exchange for his own freedom. Luke and Grifter fight, and Luke ultimately takes pity on Grifter, allowing him the opportunity to take the sub out of Gotham.

Grifter refuses the chance to escape and leaves the sub in order to save Huntress. He blows up the peacekeeper who has taken Huntress down, then leads her over to the submarine. Grifter tells Huntress that he’ll buy her some cover as she escapes. He wants her to save more people.

As Huntress makes her getaway, Grifter battles Magistrate forces until he’s taken down by the still-living, charred peacekeeper he blew up only a couple of panels ago. At the issue’s end, both Luke and Cole are in Magistrate custody once more.

Analysis: This was a fun follow-up to the Grifter/Luke Fox story that appeared in Future State: Dark Detective #1. In this second installment, Grifter connects Luke Fox with Huntress, who can help Luke escape from Gotham City.

The frenetic, nonstop action and wild banter from the previous installment are in full swing here, but there’s an added layer of depth to this second part that makes it stand above the last issue. Grifter is given more of an arc. In the first half of the issue, several characters reiterate, especially Huntress, how selfish and self-centered Grifter is, which feeds into his decision to make a sacrifice near this issue’s close. While this change of heart isn’t new or even unique, it’s the right amount of emotional weight to both attract new fans to Grifter as well as provide this story with some sense of purpose beyond just explosive action.

Even more interesting is Luke Fox in this story. Luke is the traitor, and he willingly sells out Huntress in exchange for his own life. It’s almost ironic to consider that in this story’s final few panels, Batwing is the selfish one, and Grifter, the hired gun, is the selfless one. What a turn, huh?

Speaking of turns, the last panel of this story showcases Luke shouting at an unmasked Cole Cash, Grifter. Cash has a smile upon his face as a peacekeeper stands behind him. The peacekeeper, however, is the same one who was blown up in quite the explosive display by artist Carmine Di Giandomenico and colorist Antonio Fabela only a few panels prior. Yet, he still lives — the peacekeeper’s body a gruesome sight of purple and red scorched flesh covering his entire body. He looks almost like Two-Face’s scarred side, and it’s a wonder the Magistrate assassin is still standing.

This begs a couple of questions: is this peacekeeper juiced up on some kind of Lazarus Resin seen in the Future State: Robin Eternal books? Or is this peacekeeper a reanimated corpse revived by the same compound Joker used to build his army in Joker War? Hopefully, we’ll find out because it seems like quite the development, especially since it’s depicted in such a nonchalant, casual manner.

Future State: Dark Detective #3 rushes towards a final showdown just as Bruce Wayne begins making headway into unraveling the Magistrate. The noir atmosphere is top-notch, but the story comes across as sparse and trite, as if we’re missing a middle section somewhere.