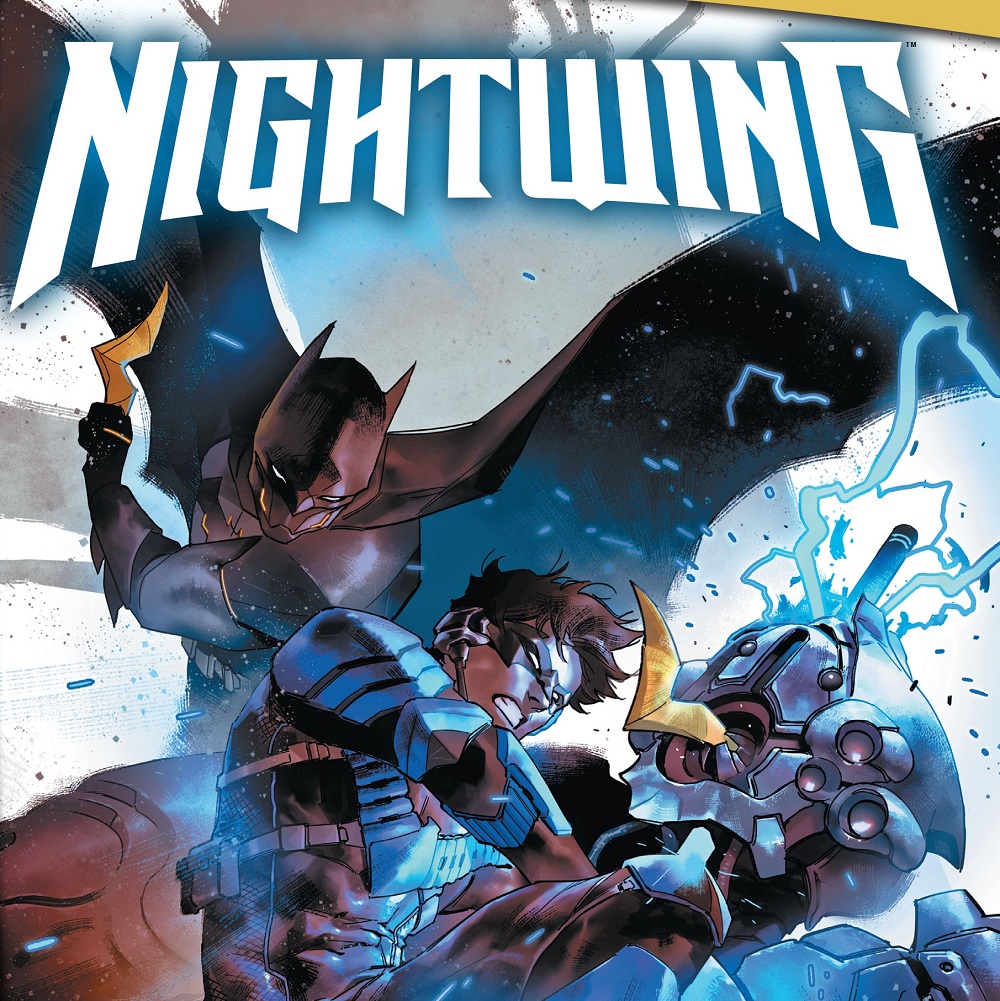 Overview: In Future State: Nightwing #2, the Magistrate attacks Nightwing at Arkham.  Nightwing is able to inflict his own blow and gain an ally in the process.

Synopsis (spoilers ahead): “Once Upon a Night in Gotham Part 2” opens with breaking news coverage from reporter Michael Johnson of JAK-L News.  He is interviewing Peacekeeper-06 as they prepare to launch their assault on Nightwing.

Inside the Asylum, Batman and Nightwing watch the monitor.  They talk about the fact that the broadcast we are watching is not actually being broadcast. When it is it will still be presented as being live for authenticity.  The network is in the back pocket of the Magistrate.  The Magistrate hopes to humiliate Nightwing publicly and therefore achieve total victory.

Nightwing fires the first shot.  He blasts the area with an E.M.P. Blast frying everything electronic including Peacekeeper-06’s cybernetic eye and Johnson’s camera.  The blast was powerful but it will only incapacitate their cybers and tanks for a little while.  Nightwing tells Batman he needs to leave and starts to choose his weapons.  Batman however is not leaving.  He has chosen this life.  Nightwing insists that if he does not get out of this alive, Gotham still needs Batman.  Batman however says that Nightwing needs his help and Nightwing accepts forming a new Dynamic Duo.

Magistrate troops enter the asylum and are immediately attacked by Batman and Nightwing.  The two easily take out the troops.  Nightwing asks one of the troops that is still conscious what are his orders.  He tells them that they are to shoot to kill, even if the heroes surrender.  Nightwing and Batman take fire and the two stop their conversation and continue with the fight.

Outside, Peacekeeper-06 finds out that the tank’s weapon systems and automated pilot programs are back on line.  Peacekeeper orders the tanks to fire missiles into the asylum even though her troops are still inside.  The tanks fire and Arkham is engulfed in a fire ball.  Meanwhile the Cybers are also now fully functional.  Peacekeeper orders the tanks to fire again and she will send the Cybers in to collect the bodies.  She is quickly interrupted by a batarang grazing her face under her cybernetic eye.  The Resistance has arrived in force, including Huntress, Batgirl (Cassandra Cain), Talia al Ghul, Robin, Two-Face, Man-Bat, Batwoman and Barbara Gordon as Oracle.  The Resistance attacks the Magistrate.

Inside the blasted out command center of Arkham, Nightwing sees the Resistance engaging the enemy.  Batman admits that he called them.  He called them because the heroes of Gotham need Nightwing as much as Gotham needs Batman.  The two prepare to make their escape.

Outside the fight rages on.  Oracle gets a message from Batman ordering the Resistance to evacuate.  Oracle appears to be cornered but a souped-up car roars out of the asylum and through the lines of the Magistrate.  Johnson berates Peacekeeper-06 only to get his neck snapped.  Peacekeeper finds out that her vehicle is the only one running and gives chase.

Nightwing and Batman in the car are headed to Blüdhaven.  Batman apologizes for contacting the Resistance without Nightwing’s approval.  He was afraid the Resistance was going to lose their leader.  Nightwing admits that Batman did the right thing.  Batman asks if he is in their club and Nightwing tells him that he is not out.

They are interrupted by Peacekeeper-06 ramming Nightwing’s car over an embankment.  Nightwing crawls out of the car and is met by Peacekeeper-06 herself.  She attacks the two heroes.  Peacekeeper stands over a downed Batman and is ready to pound his face while discussing the girl that brought Batman to Arkham in the first place. Peacekeeper-06 ordered her death.  She is interrupted by an electrified baton into her cybernetic arm.  Nightwing reveals that Peacekeeper-06’s real name is Elizabeth Marcus.  When she was fourteen years old, her parents were murdered by the Joker.  She saw her family destroyed but instead she chose to blame the villains and the heroes.  They need to be cleansed from their lives.  Nightwing tells her that she will never stop Batman, Batman is Gotham and Batman is forever.

Marcus attacks Nightwing but with Batman’s help she is defeated.  She asks if Nightwing is going to take her life.  It does not mater, she will be replaced tomorrow.  Nightwing does not want a martyr, instead he wants the Magistrate’s reputation.  He had launched nano-swarm cameras that are silent invisible and E.M.P. Proof.  He was recording all the events of the night from Arkham to now.  He recorded every terrible thing they did and said.  Peacekeeper pleads for Nightwing not to release the footage, he just says that he will send her an invite to the premier.  Nightwing is going to release the footage to the internet and social media.  If he had died, the footage would have been automatically released and the Arkham systems had already been wiped.  He was taught well.  Nightwing and Batman stumble into a new day.

Analysis: Where the last issue was set up this was the action issue.  The big reveals is that the Magistrate has bought the media but Nightwing has another way to get the truth out even if it meant that he will die.

I found the more compelling character in this issue to be Batman.  He does not appear to be a lone wolf but instead is and wants to be a team player.  When Nightwing tells him to leave, Batman insists that he needs his help.  Batman is even able to contact Oracle and the Resistance and get them to provide much needed cover for Nightwing’s and his escape from the bombed-out Arkham.

Nightwing on the other hand is acting like his old mentor.  He wants Batman to escape at the beginning of the fight.  When he sees that the Resistance arrived, he was annoyed and concerned for their safety.  He admits to Batman later that he had become over protective of the heroes after the death of his mentor.  He does realize that that was probably not the best attitude to have.  He did not realize that the Resistance needs him to be their leader and if he dies here, the Resistance could crumble.

The artwork in this issue is good but it really doesn’t have any wow panels to talk about except for the explosion panels.   The panels portray an Arkham Asylum engulfed in a massive fireball that is as bright as the night is dark.

I enjoyed reading this issue but I wish there was more.  I really would like to explore this timeline a little more and I feel there are many more stories to tell.  This was just a teaser for Future State and I would like to see more. Not perfect but very satisfying.