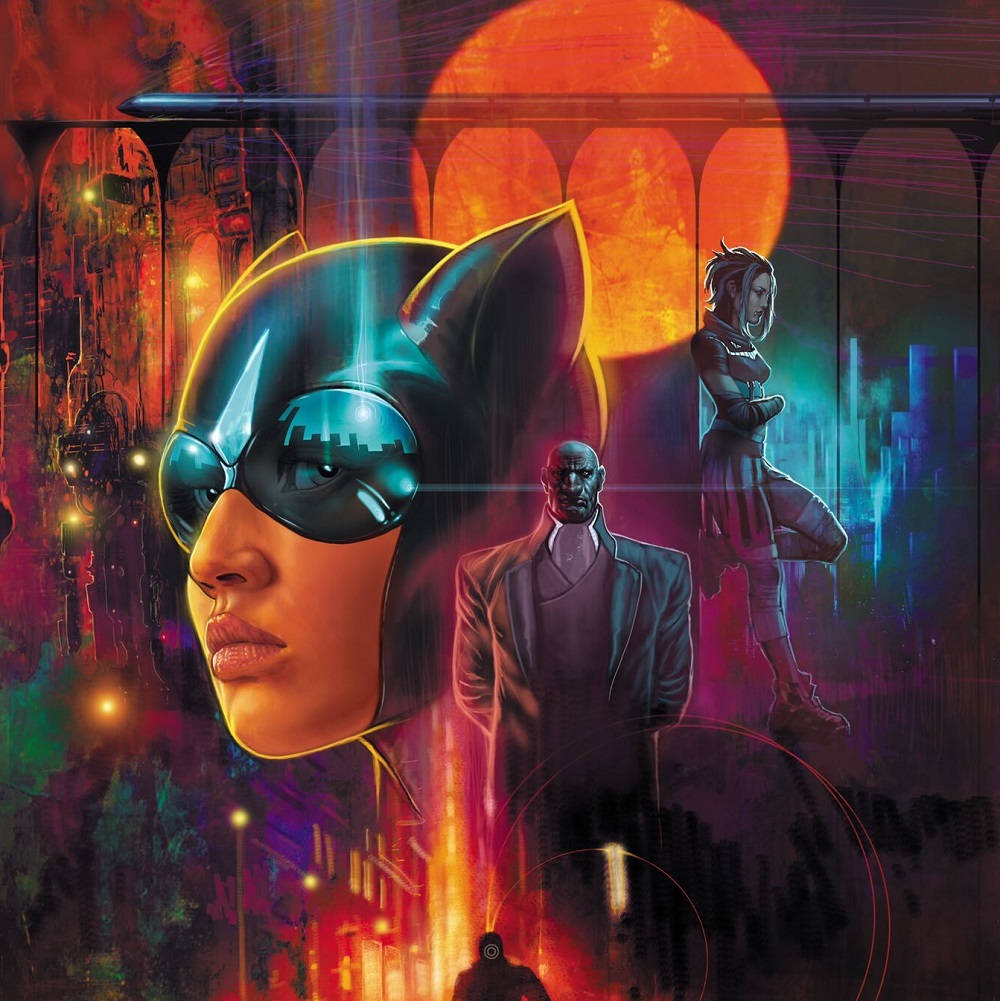 Overview: In Future State: Catwoman #2, despite suffering injuries, Catwoman is reunited with Bruce Wayne and makes her escape with the children bound for Whitepoint Reformatory.

Synopsis (spoilers ahead): Catwoman radios Cheshire from the speeding train, indicating that the Irontown Tunnel is near. Cheshire manages to fight off all of the remaining guards and sets the charges. Leo has a team inside what looks like a train car, and he informs Catwoman that when the charges go off, all power will be lost to the train for about 30-40 minutes. Catwoman can barely respond, as she is spent and possibly injured after her and Onomatopoeia’s battle with the guards. The train enters the tunnel, the charges blow, and the power on the train goes out. But Catwoman is slumped over, unconscious, and is dreaming about Bruce Wayne’s funeral. In the dream, Batman explains that while Bruce might be dead, Batman lives. He begins slapping her, and Catwoman comes to, stopping Onomatopoeia from slapping her again. They are both alive and relatively unhurt, but they notice sedative gas seeping into the train car, on the captain’s orders.

Up ahead, Bruce and Talia Al Ghul are fending off guards; much to her annoyance, Bruce insists on his no-killing rule. Talia recommends that they unlock the front doors and jump out, answering Bruce’s question by explaining that most of the rest of the guards are dealing with a “disturbance” behind them. Bruce sees Catwoman and Onomatopoeia struggling with the effects of the gas. Leo informs Catwoman that the doors of their train car are highly reinforced steel with heavy-duty mag locks. Catwoman orders Leo to overload the magnets in her hands when she has placed them on the door. This will cause a large electromagnetic shock but will likely damage Catwoman’s hands.

The doors blast open, and Catwoman and Onomatopoeia take on the guards surrounding Captain. After a valiant effort, she is brought to heel, and Captain taunts her before holding a gun to her head and asking for her last words. She answers, “Batman lives” and watches as Bruce knocks out Captain from behind. After the foursome finishes off the guards, Bruce tells her that bats have more than one life as well, and the two kiss. The pair indulges in some light banter regarding their choice of partners for the caper, and then they realize that they need to get off the train fast, as the power is restored, and Captain has sent out a distress signal to the Peacekeepers. The cars are all hard-wired with explosives, and Catwoman explains that the best option is to cut the car with the children in it and then attach it to a restored rail engine from the Gotham Ghost Rail that runs right underneath the Irontown Tunnel. Catwoman herds the kids to the rear car, and Bruce begins to deploy the uncoupling lever. Catwoman is distressed to hear that Bruce will not be accompanying her and the children, as he plans to draw attention away from them by speeding up the train and then jumping out with Talia near where she has resistance forces arrayed.

Bruce assures Catwoman that he will find her if she steals something important. The narrator reiterates that “there will always be strays,” and the Peacekeepers find little left of the train after a large explosion, other than the Captain, handcuffed to a remaining car. On the car, the spray-painted testimony is written: “Batman Lives.”

Analysis: Two-shot books are a challenging form, but Ram V and Otto Schmidt rise to the occasion. The fast-paced, linear movement of the initial book erodes somewhat in the second installment, but that is understandable given the need to position effectively the obstacles our heroes must overcome. Bruce and Selina’s partners in the dance suffer a bit in this book, and while one can forgive Onomatopoeia for being a bit thin of a character, the same cannot be said for Talia. Still, Bruce’s relative lack of interest in the mother of his child compared to his feelings for Catwoman are a nice statement of the depth of his love for Selina even in the Dark Multiverse’s Future State Gotham.

As predicted, the Captain does not turn out to be much of a villain, although most rogues would not fare all that well against the four heroes (or maybe three heroes + one antihero?). There’s not much more to say, as the escape from the train has to be wrapped up quickly. The blue and red tones in Schmidt’s art continue to impress, and the parting scene between Bruce and Selina, as the train cars drift apart in the dark, is beautifully film noir. It provides a poignant seal on the entire affair.

While it is, in my view, almost impossible to convey significant emotional resonance in a two-shot, the successful heist and escape, as well as Catwoman’s discovery that Bruce is alive and well enough, make for a satisfying finish. I continue to have my doubts about the form itself (mini-series at a minimum, please), but the arc nevertheless feels complete and is, if nothing else, an enjoyable Bat/Cat caper in Future State Gotham.

Ram V and Otto Schmidt craft a compelling conclusion for Future State: Catwoman #2, even amidst the constraints of the two-shot format.