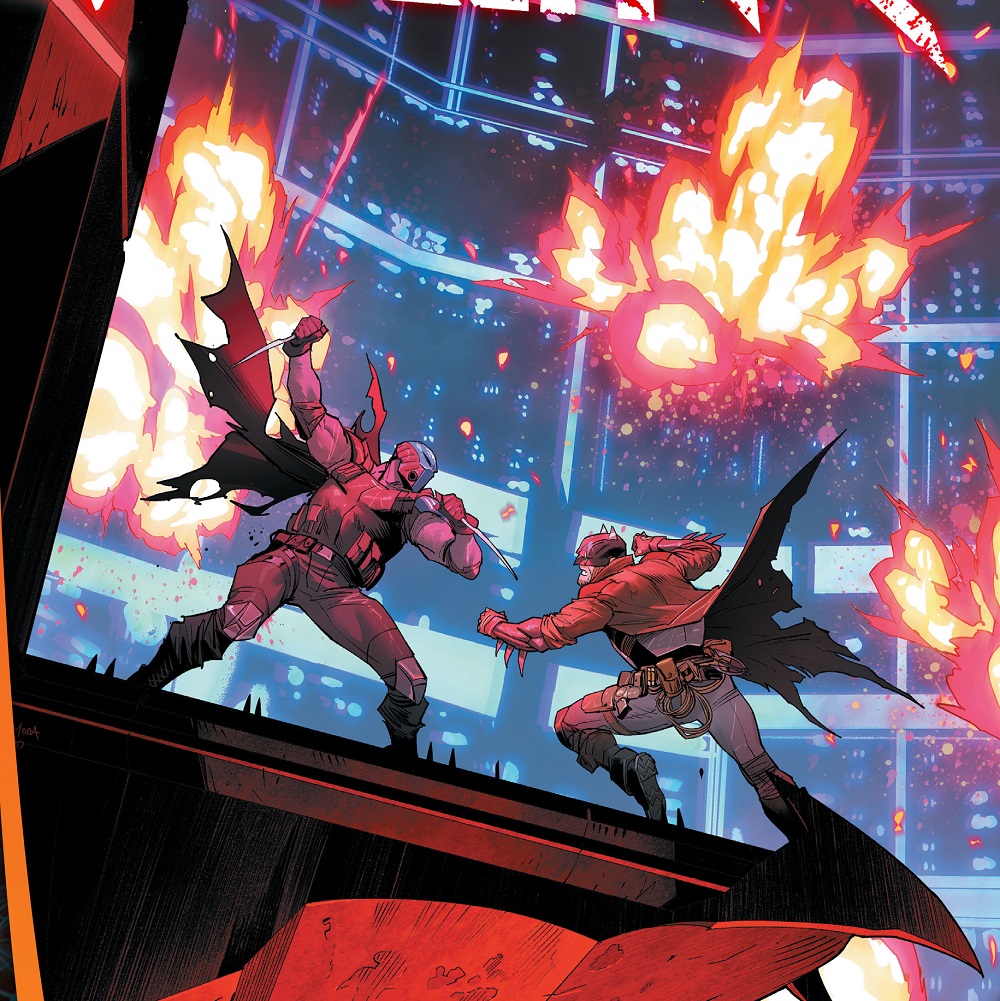 Overview: In Future State: Dark Detective #4, Bruce Wayne lures Peacekeeper-01 out into a final showdown in an attempt to destroy the Magistrate’s spy drone network.

Synopsis: Hannah, Noah’s daughter, sits in a board meeting at the headquarters for the Magistrate. A woman gives an update on the number of surveillance drones in Gotham City, which leads to Peacekeeper-01 asking for the rate of lost units. While low, the fact that any units are lost tells Peacekeeper-01 that these nano drones aren’t imperceptible, which was the whole goal. It’s a vulnerability.

Hannah is interrupted by a phone message from Noah. She excuses herself, so she can call him back. On the phone, Noah tells Hannah that “Jeff” (Bruce Wayne) is on the roof meddling with something.

Jeff is taping something to an antenna on the roof. As he finishes up, he’s stopped by Noah. Bruce tells Noah to put the gun down, and we’re left in the dark as to what happens immediately after.

Bruce is trying to save Noah and Hannah, and to do that, he’s fixed a signal deregulator to the antenna. Hannah comes home, and the first thing she does is interrogate Bruce. Midway through her line of questioning, she asks where her dad is. “He’s safe,” Bruce tells her before knocking her unconscious.

Bruce places Hannah’s sleeping body in a van just as Magistrate drones descend upon Noah’s house. They’re drawn to a device on the roof, which has interfered with their signals and visuals. An explosion wipes out the Magistrate’s drones. They don’t know what hit them, but Peacekeeper-01 does. It’s Bruce Wayne.

Hannah awakens in a bunker. Bruce is there with Noah, who is still asleep. Bruce reveals his real name to Hannah and what he’s up to. He asks her for intel that she’s learned from working for the Magistrate. Hannah reveals that she’s been collecting data in order to expose the Magistrate. She then plays recordings of Peacekeeper-01 incriminating himself by revealing his plans for total control of Gotham. Her plan is to deliver these to a media contact.

Bruce tells Hannah to hang tight while he heads out. He’s on his way to attack Magistrate headquarters. Hannah doesn’t listen, and she heads to the same location.

Batman blows up a sector of the headquarters as a lure, then heads inside. He finds Hannah frantically searching a computer, and he orders her to evacuate. As she leaves, Peacekeeper-01 attacks.

The two fight and Batman puts just enough effort in to keep Peacekeeper-01 going, to keep this villain in the same spot while a timer ticks down. Ultimately, an explosion rocks Magistrate headquarters. While Hannah escapes with the intel she was looking for, it’s unclear if Batman or Peacekeeper-01 survived.

Analysis: The art from Dan Mora continues to impress with stunning visuals along with a moody and colorful atmosphere from colorist Jordie Bellaire. These two are a dream, creating a future scape Gotham City that is larger than life, swallowing its characters whole with expansive lights, a sweeping cityscape, and a tone that more than reflects the cyberpunk Noir style this book has been going for these past four issues.

However, Future State: Dark Detective #4 leaves readers with a cliffhanger after a finale that comes across as rushed and almost nonsensical. This whole time, if only Bruce Wayne opened up with Hannah and spoke to her, he’d have the intel to help bring about the destruction of the Magistrate. Even when presented with this intel, he dons his makeshift Batsuit and runs off anyway, planning to blow up the Magistrate in a big display. Through monologue, we learn that Bruce justifies this with the trite musing, “The best way to end a secret is to blow it up in a way that’s big enough for everyone to see.” Yes, but so what? Why?

While the final battle between this miniseries’ villain Peacekeeper-01 and Batman is exciting to look at, the story forces its way to an explosive conclusion (because of reasons!) and ends with a cliffhanger suggesting that Bruce Wayne may have died for real (along with Peacekeeper-01). The goodwill this Future State book earned in its first three issues is tossed aside for a teaser, which makes this whole exercise feel moot and unimportant. Why did we even bother to begin with?

Synopsis: At the hideout of one deceased Mad Hatter, Ravager questions Jason Todd as to why he suddenly has an exorbitant ransom on his head. Before she could finish her thoughts about how she could retire with that money, Red Hood has fled the scene.

On his motorcycle, Red Hood contacts Magistrate HQ to ask about the ransom. The man on the other end says it might be a mistake, then tells Hood to come into the station. Before Jason Todd can make a decision, Magistrate drones blow him off his bike.

Red Hood takes out the remaining drones and hides while Peacekeepers search for him. He’s wounded, so he finds a safe spot where he can patch himself up. Once safe, he pulls out the Red Hood helmet belonging to the imposter (from two issues ago), the one lined with Mad Hatter mind control tech, and puts it on.

Jason, under mind control, returns to the owner of this tech. Her name is White Rabbit, and in a very long monologue, she details how she took the tech from Mad Hatter and updated it for modern times.

Just then, Ravager shows up. Ravager’s precog powers told her this meeting would happen, so she gets the drop on White Rabbit. White Rabbit orders Jason to fight Ravager, and he obliges since he has the helmet on.

Ravager and Red Hood fight until she manages to cut part of his helmet. This frees Jason, and the two are about to take down White Rabbit and her gang. Jason asks her who she works for, and she reveals that she works for the Magistrate. They just didn’t like it when she went into business for herself.

The Magistrate arrives with drone guns blazing. Jason and Ravager fight their way out of White Rabbit’s hideout. On the rooftop, drones come for them, then suddenly turn around when Ravager tells the drones that she’s bringing in Red Hood alive.

After the drones have left, Jason proposes that the two of them go to Deathstroke’s secret island. Afterward, Peacekeeper-03 tells Jason that he’s clear and will get hazard pay for aiding in the take-down of White Rabbit.

Back at his motorcycle, Jason is about to head out until a mysterious voice from the alley calls to him, asking if he saved any evidence that could take down the Magistrate. Jason gives a coded response that pleases the voice. The voice then tells Jason that it’s tracking down the funding of the Magistrate and that soon it will take down the organization.

Jason tells the voice to keep Ravager out of it, then leaves. As he drives away, he tells this mysterious voice that it better head home, since the sun is out.

Analysis: This was a follow-up to the Red Hood backups story that appeared in Future State: Dark Detective #2. In this story, we get closure to Jason Todd’s investigation of this new Red Hood gang. Like everything else in Future State, nothing is as it seems. The proprietor of this new and improved Jervis Tetch tech is White Rabbit, and she’s playing two sides. The Magistrate wants her eliminated for her double-cross.

Though there’s a brief explanation via dialogue, it’s still not clear why the Magistrate would put a bounty out on Jason Todd while he’s investigating White Rabbit. The villain tells Jason that it’s because they wanted to use Jason to ferret her out, but what if Jason would have died en route to White Rabbit? He was attacked by drones, and he was shot in a couple of spots.

This is the big lingering question left after this story, and it makes one wonder how much thought was put into this overarching and interconnected world of Future State. Most of these stories, thus far, have loosely connected to each other, serving to fill in the gaps of what’s going on in Future State Gotham, though none of them achieve this very well. With this Red Hood, it appears to connect to the main Future State: Dark Detective storyline in that the voice in the alley, the one investigating the funding behind the Magistrate, most likely is Bruce Wayne. This was his whole angle throughout the main Dark Detective book. Plus, Jason’s comment about Bruce heading home because the sun is out fits in with Bruce working in the shadows as both Batman and as this specter of a man publicly believed to be dead. That being said, Bruce learning that White Rabbit works for the Magistrate does nothing for his story, and it’s not even mentioned at all in any of the Dark Detective core narratives.

Overall, this follow-up story was improved over the previous half. In lieu of a mystery, Joshua Williamson and Giannis Milonogiannis presented a nonstop action romp, which carries kinetic, fun energy that was missing in the last chapter. This isn’t necessarily enough of a change to save the issue, but it’s a much-needed dose of excitement after the confusing mess that was the main story for Future State: Dark Detective #4.

Future State: Dark Detective #4 rushes to a bewildering conclusion that opts for a cliffhanger rather than a satisfying ending, which is a shame, considering that the art in this four-issue miniseries has been stellar.