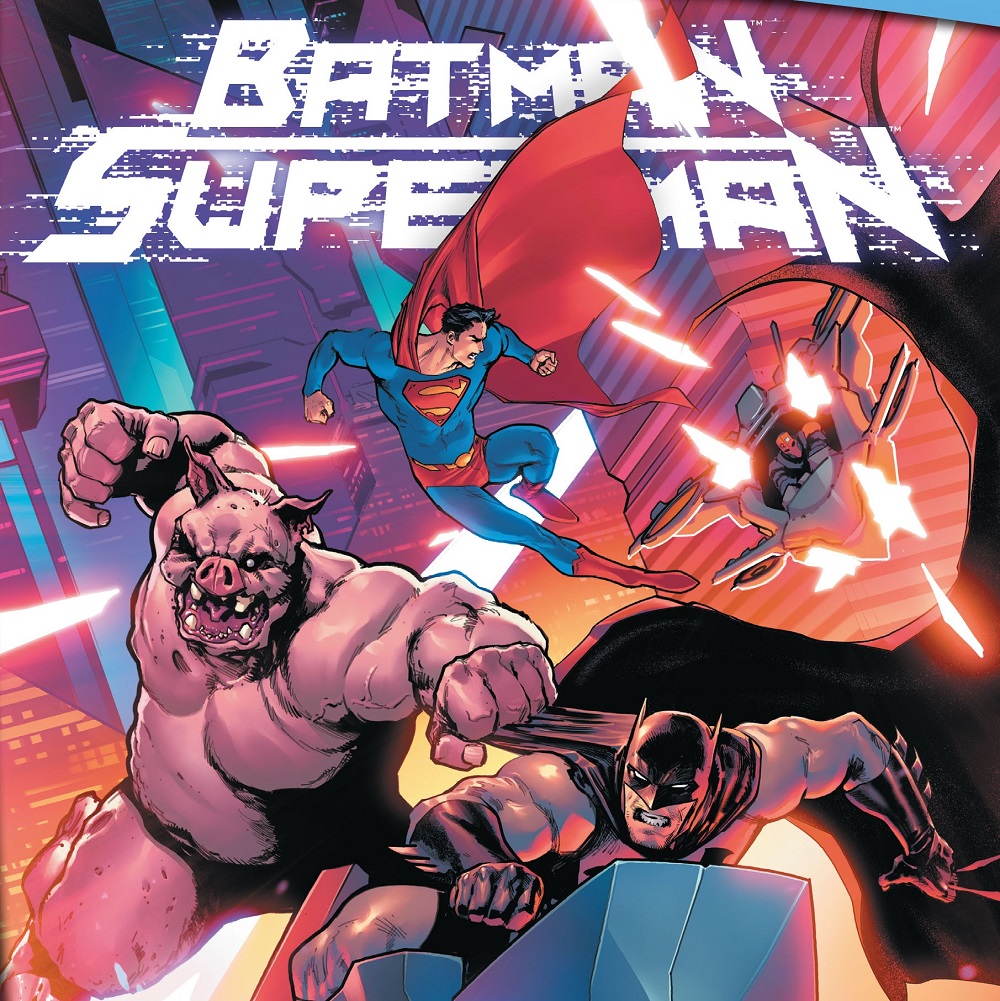 Overview: In Future State: Batman/Superman #2, Batman and Superman discover new information about the Magistrate, which sets the World’s Finest on separate paths.

Synopsis (spoilers ahead): Under the streets of Gotham, Batman confronts Mr. Toad, ordering him to release the Man of Steel, now. Strapped to a stretcher with a kryptonite dagger still sticking out of his chest, Superman lies unconscious, unaware of the entire situation.

Beside Mr. Toad stands a genetically mutated henchman, who attacks Batman at his master’s bequest, successfully stalling the Dark Knight long enough for Mr. Toad to vanish, along with his unwilling captive.

Batman’s fight with henchman is brief; it painfully ends with him falling out of the hospital window, breaking his fall with his leg, and subsequently breaking the limb. Despite this, the Batcycle is quick to arrive at Batman’s command, and the hunt for Mr. Toad and Superman begins.

Meanwhile, Mr. Toad has managed to secure Superman in an unknown room, surgical lights shining down on the hero. Peering over him, Professor Pyg squeals with delight as he prepares an electric screwdriver, the drill bit shining a bright Kryptonite green.

Later, Batman analyzes the file he retrieved from the False Face Society’s headquarters – the old Gotham hospital. The USB drive reveals some interesting information; while the False Face serum might have been marketed as a way to get around the Magistrate’s facial recognition systems, it’s actually being subsidized by the Magistrate itself. It’s evident that they must have Superman somewhere.

Elsewhere, Superman groggily asks Mr. Toad what Professor Pyg did to him, to no avail. Mr. Toad attempts to bandage his side, and Superman decides to give the university professor one more chance. Superman breaks out of his bonds and possibly Mr. Toad’s as well.

After encountering, and defeating, a Magistrate drone enforcer, Batman realizes that the Magistrate is using Superman’s DNA to level up its surveillance. After hacking a transmission device employed by the Magistrate, Batman discovers the location it’s transmitting data to – a secret laboratory, where the Magistrate is synthesizing Kryptonite.

Professor Pyg is more than happy to welcome Batman into his laboratory with open arms, the mutated heads of boars salivating where his hands should be.

Further in the lair, Superman reflects that betting on a person’s goodness pays off as Mr. Toad slowly helps Superman distance himself from the operating room. Their forward movement is brought to a halt as a monstrous man blocks their way, his seven red eyes capable of heat vision identical to Superman’s.

It’s with a resounding crash that the creature–a creation of Professor Pyg–goes flying through the wall, effectively leading the two heroes to each other. The battle is quickly won after that and the laboratory burnt to the ground, standing no chance against Superman’s heat vision.

The next day, Batman and Superman gaze out above Gotham’s East End, securely hidden in one of Batman’s micro-caves. Despite the peace outside, the conversation between the heroes is anything but.

Batman argues that he will be taking down the Magistrate, alone, without Superman’s help. The Magistrate figured out how to grow synthetic kryptonite, which must have taken months, maybe years. They were clearly expecting the Man of Steel, which, in Batman’s eyes, makes him a liability.

The Dark Knight continues; Superman can’t beat the Magistrate because he can’t see them for what they actually are. Ultimately, Superman is too trusting, believes too much in the goodness of others, and the Magistrate exploited that. This time, they only captured him, but next time…Batman only finishes the thought in his head; they’ll kill him.

As he departs, Superman tells Batman why he’s leaving. It’s not because the other hero is demanding it, but rather it’s because whether Batman likes it or not, Superman trusts him.

In Metropolis, Mr. Toad, now back to his regular, human self, tearfully embraces his daughter, attempting to explain that he was just trying to do what’s right. A woosh of wind catches their attention, and as they wave to the Man of Steel flying overhead, Mr. Toad’s daughter replies that they’ll do what’s right, together.

Analysis: Future State: Batman/Superman #2 concludes the adventure of the World’s Finest with some wins and some losses. Writer Gene Luen Yang neatly wraps up the majority of plot points while building up to the rift between Batman and Superman, as artists Ben Oliver and Stephen Segovia transform the story into art, which they do fantastically. (I especially liked how the tire burns from Batman’s Batcycle spelled out the word ‘vroom’.)

Overall, the issue flows well, and the action of the heroes written, on the whole, are in character. The Magistrate is still an imminent threat to the heroes, a point Batman ruminates on multiple times throughout the story. Despite their little victories, like foiling Professor Pyg’s plans, the heroes seem to take one step forward while taking two steps back in light of the cunningness and tyranny of the Magistrate.

While it does seem a bit too convenient for Mr. Toad to simply waltz back into his family’s life after disappearing for a time (and leaving no information about why), the reunion between him and his daughter and their gratitude to the Man of Steel was a nice, happy way to end the story after the spat between Batman and Superman.

Speaking of, throughout both issues, I thought Yang wrote the interaction between the two heroes really well, adding in moments of humor while staying true to their characters. Yang created a situation to showcase how the World’s Finest can work together but also how they have major differences.

As the story comes to the last page, we see this big difference come to light. While disagreeing over how to save the world or properly be a superhero are arguments as old as time for Batman and Superman, it generally revolves around the methodology. In this case, however, Batman is arguing from a much more jaded, cynical position that says, essentially, that counting on the goodness of people would be folly and could lead to the deaths of thousands.

In the end, this difference in beliefs is the catalyst for the widening distance between the two heroes. Batman is staunch (or is a better way of saying that ‘ridiculously stubborn’?) in his position that no one in Gotham, himself included, can afford to trust anymore. Trusting in others, in the goodness of humankind, are privileges afforded to the somewhat naïve likes of Superman.

I think, in a way, Yang is showcasing a Batman who is reacting to a fear being realized; people ignoring their rationality and acting solely upon their emotions. Batman’s entire character is built around the principle of reason and proper order of thinking, leaving the idea of giving others the benefit of the doubt to the likes of Superman. It’s that exact way of thinking that Superman throws back in Batman’s face as he departs.

Overall, Future State: Batman/Superman #2 was an enjoyable read and showcased a fun, yet interesting, dynamic between the two heroes. The way things were left between Batman and Superman at the end comes across as a strained and tense friendship, and yet with the vague feeling that if push comes to shove, egos will be put aside to help the other out.