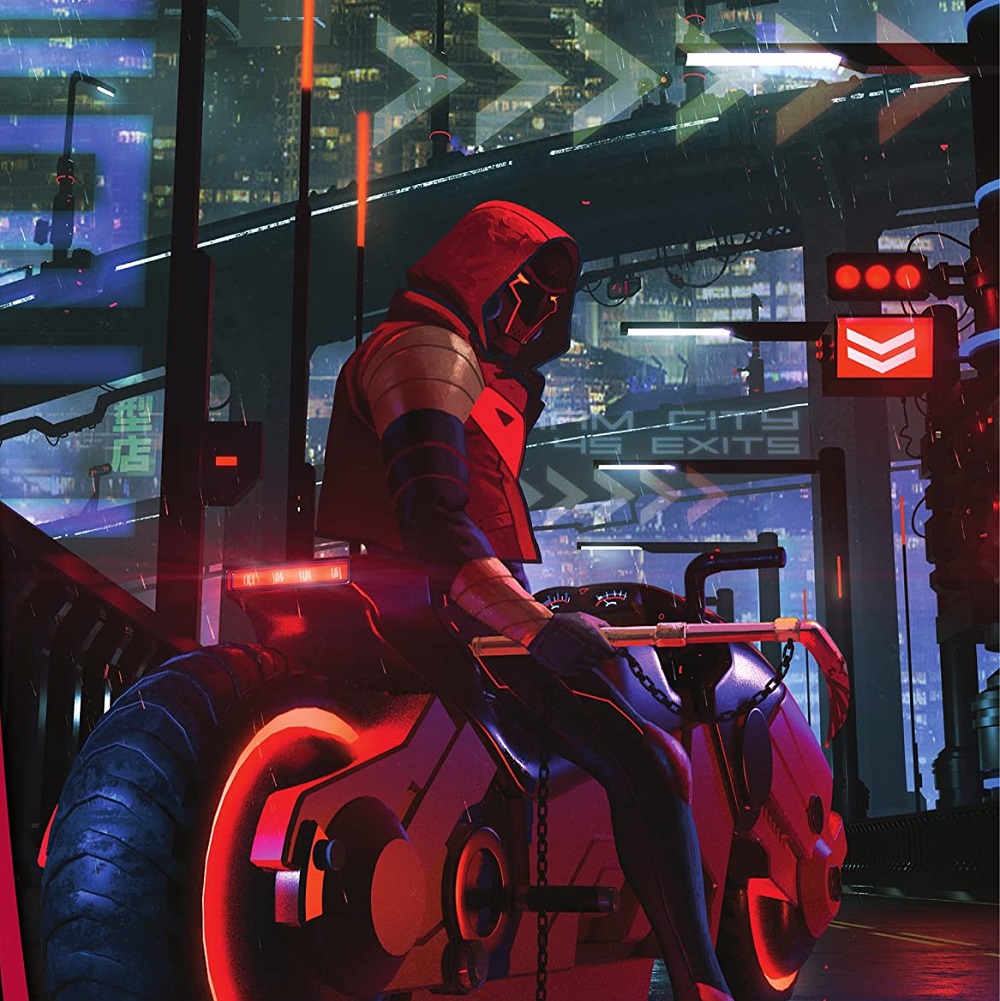 Overview: In Future State: Gotham #2, Red Hood clashes with the Bat-Family as his investigation into the terrorist attack on Gotham deepens.

Synopsis (spoilers ahead): As Future State: Gotham #2 begins, Jason remembers his conflicts with Dick Grayson over the years, starting when he was Robin, then Red Hood, villain, and now, as an undercover agent secret even from most of his family. In the present, he faces Dick, Stephanie Brown, Tim Drake, and Duke Thomas (wielding Black Lightning bound to a massive sword, seen in the excellent Future State: Outsiders storyline) on a rooftop, using their strengths against them long enough to get to his flying vehicle. Jason asks his estranged family if they really trust the Next Batman enough to know that he didn’t blow up half the city in the last issue, and then warns them to flee the Magistrate.

At a protest next to the giant Bat-crater, a hooded, bearded man rallies the angry citizens to wage war on the Magistrate.

Jason makes excuses to Peacekeeper-03, then ditches his surveillance and talks to his secret boss, Bruce Wayne, in hiding after the events of Future State: Dark Detective and Future State: Catwoman. Bruce thinks that the Next Batman might be responsible for the Bat-crater attack, and asks Jason to investigate a lead.

Dick and Tim confer, Tim having recovered from the fight with Jason thanks to his Lazarus Resin (from Future State: Robin Eternal), and they discuss their own plans to investigate, as well as keeping tabs on Jason.

In Blackgate Penitentiary, Jason questions Astrid Arkham, leader of the Arkham Knights, but the Next Batman appears, claiming he wasn’t behind the attack. Before they can really fight or join forces, the Arkham Knights, including Clayface, Two-Face, Victor Zsasz, and Killer Croc, get free and surround them.

Analysis: The second chapter of Joshua Williamson, Dennis Culver, and Giannis Milonogiannis’s continuation of the surprisingly popular Future State event of January and February 2021 fulfills several promises in Future State: Gotham #2. It picks up several characters and plotlines left unfulfilled from many series and ties them together in a mostly sensible way. Tim Drake, not just healed from his injuries in Robin Eternal, but taking that series perhaps a little too literally, has permanent healing powers like Deathstroke or Wolverine. Stephanie Brown appears as one of Dick Grayson’s key lieutenants, and Dick’s portrayal is a colder one that’s more willing to embrace the negative, perhaps because he’s become more willing to follow negative motivations himself, as seen in “Batgirls” (backup stories in The Next Batman) and Nightwing. Duke Thomas is still wielding the (awesome) enormous sword bonded with Black Lightning from Outsiders (another of The Next Batman’s backup tales).

Astrid Arkham and the Arkham Knights are briefly touched on, though the conflicts between the Batgirls backup and the Arkham Knights backup (with Zsasz appearing in both without any sense of how he transferred between the tales, among other issues like why Blackgate was liberated in Batgirls but is firmly in the Magistrate’s grasp again here) remain confusing. The biggest revelation of all, though perhaps also most predictable, we see is Jason’s true plan to serve as Bruce Wayne’s agent in the belly of the beast, unknown to the rest of the Bat-Family, after the events of the Red Hood backup from Future State: The Dark Detective, the main story of that series, and the wonderful Catwoman miniseries by Ram V and Otto Schmidt.

All of these choices take the characters where Future State left them and propel them forward in the Future State timeline to increase engagement, rather than decrease them – and hopefully escalate the conflict between the Bat-Family and the Next Batman. One hopes this will follow what we saw in Nightwing, with the Next Batman joining as a trusted ally, rather than milking that relationship for forced conflict, as the ending of Future State: Gotham #2 does a bit too much. As a whole, despite some thin plotting leading to exposition-heavy but relationship-light scenes like the beginning and ending fight scenes of this issue, Future State: Gotham continues to suggest exciting possibilities to readers about our favorite Batman Universe characters.

Giannis Milonogiannis continues to provide a heavily manga-influenced black and white art style, with strong action scenes full of great moments like Jason whipping the Black Lightning blade into Tim Drake’s arm, or the Next Batman jumping down onto Jason in Blackgate. The black and white scheme still feels too sketchy as a whole, but reasonably appealing, not actively off-putting. One almost hopes that Future State: Gotham will do well enough in sales to get a “colorized” version, similar to how many famous Batman tales get noir trade releases.

The backup story – another reprint, this time from the recently concluded Batman: Black and White miniseries – a story of Tim “Jace” Fox as the Next Batman, with his sister Tiffany as his sidekick, by Next Batman writer John Ridley and collaborator Olivier Coipel. The story provides reasonably fun action but doesn’t really do much to progress the characters or give them more motivation, like the majority of Ridley’s Next Batman stories, with the partial exception of Second Son.

Ladronn provides the main cover, with Jason on his cyberpunk motorbike, looking over his shoulder at the reader. Derek Chew gives us Jason on his bike for the variant, but coming straight at the reader, with Nightwing, the Next Batman, and a Peacekeeper behind him. Though they have a similarity in color scheme which makes it feel they are both in the same neon world, the Chew cover provides more action and characters, while the Ladronn cover feels a bit more static in pose.

Continuing to draw heavily on manga and cyberpunk sources with high energy action in a dystopian setting, Future State: Gotham pushes the overall story of Gotham forward with surprising and fun revelations, though they can’t quite make up for the thinness of the plot so far.