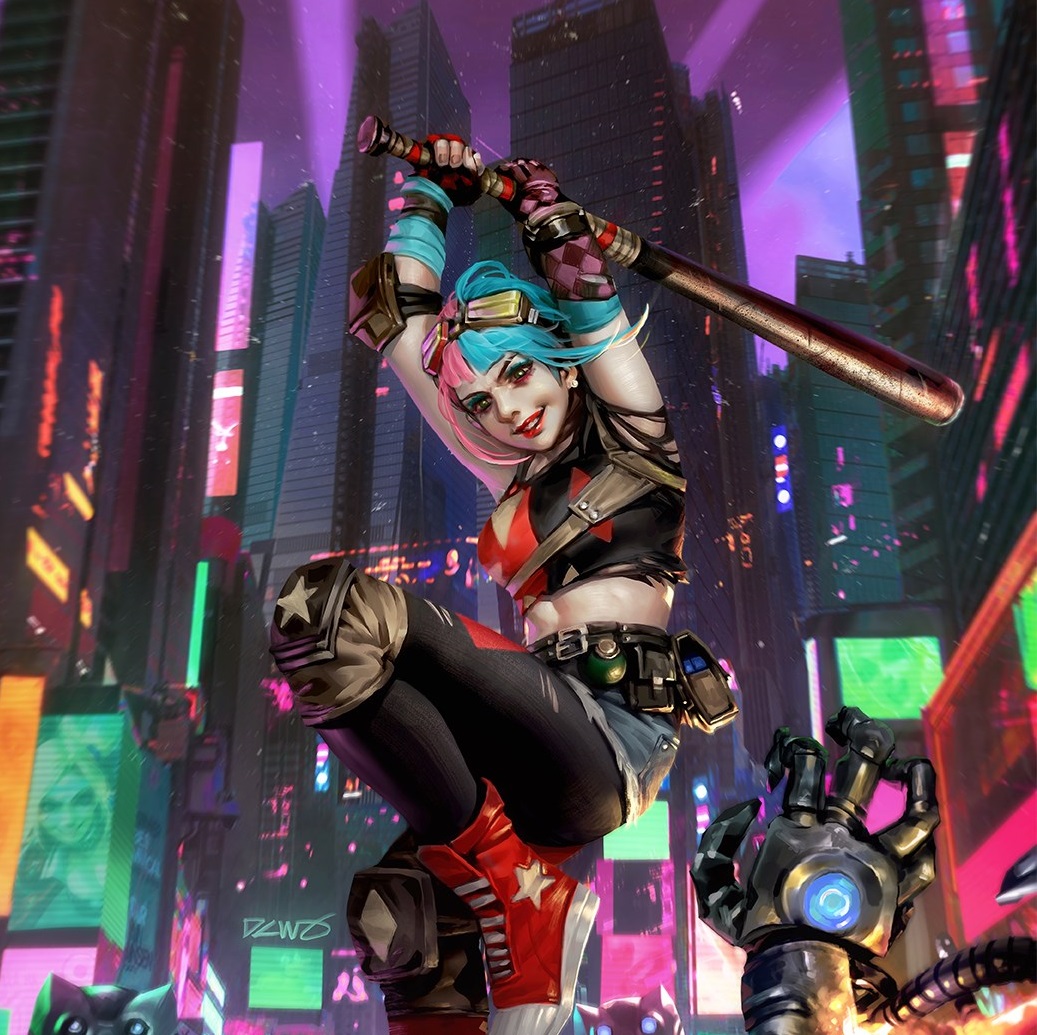 Overview: In the technologically-dominant future state, Harley Quinn is captured by the apparent legal authority. Jonathan Crane, the former Scarecrow, is now working for the authorities and offers Harley relief from the conditions of her confinement in exchange for her help in capturing some of the Rogues on the prowl in Future State Gotham City. Harley agrees and is successful, but the stage is set for a confrontation with a higher-tier villain.

Synopsis (spoilers ahead): We join our antihero in the midst of an active fight. Harley Quinn is laying waste to her opponents with a trusty baseball bat. An unseen narrator is discussing her history with Joker. Just as she smashes the last of her foes and cartwheels away in classic Harley form, she is surrounded by a new cadre of opponents. She tries to smash them, but they appear to be some kind of robots, and her bat is ineffective. She is knocked unconscious and comes to with a black eye in some kind of prison cell, clad in a full orange jumper and manacles. The previously unidentified narrator is standing in the hallway outside her cell, and he introduces himself as Dr. Jonathan Crane.

Dr. Crane praises the Magistrate for getting rid of “The Bat” and for outlawing masks, and he professes that he gave up his own costume in order to “cleanse this city.” He asks Harley what truly frightens her, and she insults him. He returns the insult and then indicates that he’d like Harley’s help in apprehending some of the villains still roaming the streets of Future State Gotham. Although a picture of Black Mask flashes on the screen in the cell, Crane indicates that the first target is Professor Pyg. He explains that the “Peacekeepers” have had trouble apprehending Pyg, and many of them have been mutilated and killed in the effort. Crane indicates Harley’s assistance will improve her current circumstances. Harley dismisses him, but just as Crane is leaving, Harley offers her perspective and advice in exchange for removing her chains.

Crane insults her again but does not deny the request. Harley explains that Pyg has O.C.D., violent hallucinations, and childhood trauma that compels him to seek perfection in his “creations” and then display them. She counsels Crane to intentionally create “art” that Pyg would find deeply flawed, sign Pyg’s name to it, and publicize it. Crane returns later to note that Harley’s plan worked, and he orders her restraints removed. Harley requests some fresh air and her old clothes back, and Crane agrees so long as she helps with the next rogue on his list: Firefly. While doing handstands and enjoying some movement, Harley profiles Firefly and recommends a plan for his capture: create some target that has a sentimental connection to Firefly, which he won’t be able to resist. Then, Harley suggests the Peacekeepers borrow some equipment from whatever firefighting forces exist in Future State Gotham, which will enable them to withstand Firefly’s initial blast and then douse his fire.

This works, and Crane returns to remove Harley from her cell. He tells Harley that Pyg and Firefly were mere “appetizers” and the “entrée” is now the target. The scene switches to a burglar wearing what appears to be a “Black Mask” robbing the proprietor of a store at gunpoint. Grumbling about the poor take, he departs the store, sees another figure in a Black Mask, and yells at the latter to find his own store to rob. He is promptly knocked out and wakes up upside down in a room full of figures all wearing “Black Masks.” A voice criticizes him for daring to take on the symbol of the Black Mask, and the voice is addressed by the victim as “Roman.” “Roman” (presumably Future State Black Mask) shoots the victim, closing the book by saying “Don’t ever forget why we wear the mask.”

Analysis: From the advance publicity, I was excited to learn that Harley would be matching wits with Jonathan Crane. As someone who has always believed that a fear narrative is at the very core of Batman, I’ve long been fascinated with Scarecrow and think that he has mostly been underutilized as a Tier II villain in the Rogues Gallery (consider that even in the Nolan trilogy he is merely a stooge for Ra’s al Ghul and the League of Assassins). Here, we see two brilliant psychologists pairing up to take down some of their fellow Rogues. As someone who grew up with Batman: The Animated Series, Harley has always been very important to me, and I particularly appreciate two choices that writer Stephanie Phillips makes here.

First, Harley’s brilliance is on full display here, thereby continuing the growth and character development we see from her ditzy, early years. As bright and as experienced as Jonathan Crane is, he needs Harley’s insights and understanding. Crane was a talented university professor in his own right, and he knows a thing or two about ‘how to villain.’ But he cannot apprehend these rogues, so he understands that he needs Harley’s intelligence and expertise in criminal psychology (thereby connecting the story to Stjepan Sejic’s jawdropping Harleen, where her intellect is also highlighted). Harley analyzes Pyg and Firefly with surpassing ease, quickly recommending feasible plans that result in their capture. Crane is impressed. We should be, too.

Second, there’s an unspoken but evident tie-in to the continuity of the main book, as Harley in the recent Ghost-Maker arc has embraced an effort for redemption and considers herself in basic alliance with Batman, at least for the moment. In Future State Gotham, we are to believe that Crane has cast aside his Scarecrow identity and is instead leading the Peacekeepers in implementing the Magistrate’s wishes to eliminate Future State rogues. Thus, there is symmetry between Harley in the main book, who has generally been battling Batman’s rogues (see also Joker War), and Harley in Future State, who is apparently doing the same.

I have more mixed feelings about the art. Although I love the dynamism, confidence, and playfulness of Harley in Derrick Chew’s cover, I’m less enamored with Simone Di Meo’s decision to break up most of the panels into narrow slices. I love Harley’s physicality – the way she moves, twirls, leaps, toys with gawkers, etc. Breaking up the panels interferes with the smooth and easy dynamism, at least after the first few pages. I’m also not sure I love the rendering of Harley, who looks very Aeon Flux to me, although I suppose that’s appropriate for a Future State Harley. Di Meo’s art feels pretty anime to me, and whether that’s good is really more a matter of personal preference given the context of Future State and the ashes of Dark Metal IMO (i.e. I don’t necessarily love it, but it does feel more appropriate for the setting than it would in continuity).

I love Harley Quinn, and it’s fun to see what a solid creative team can do unfettered from the constraints of continuity. The writing especially feels authentic to the Harley I most like to see represented, and in particular it honors her character development and growth.