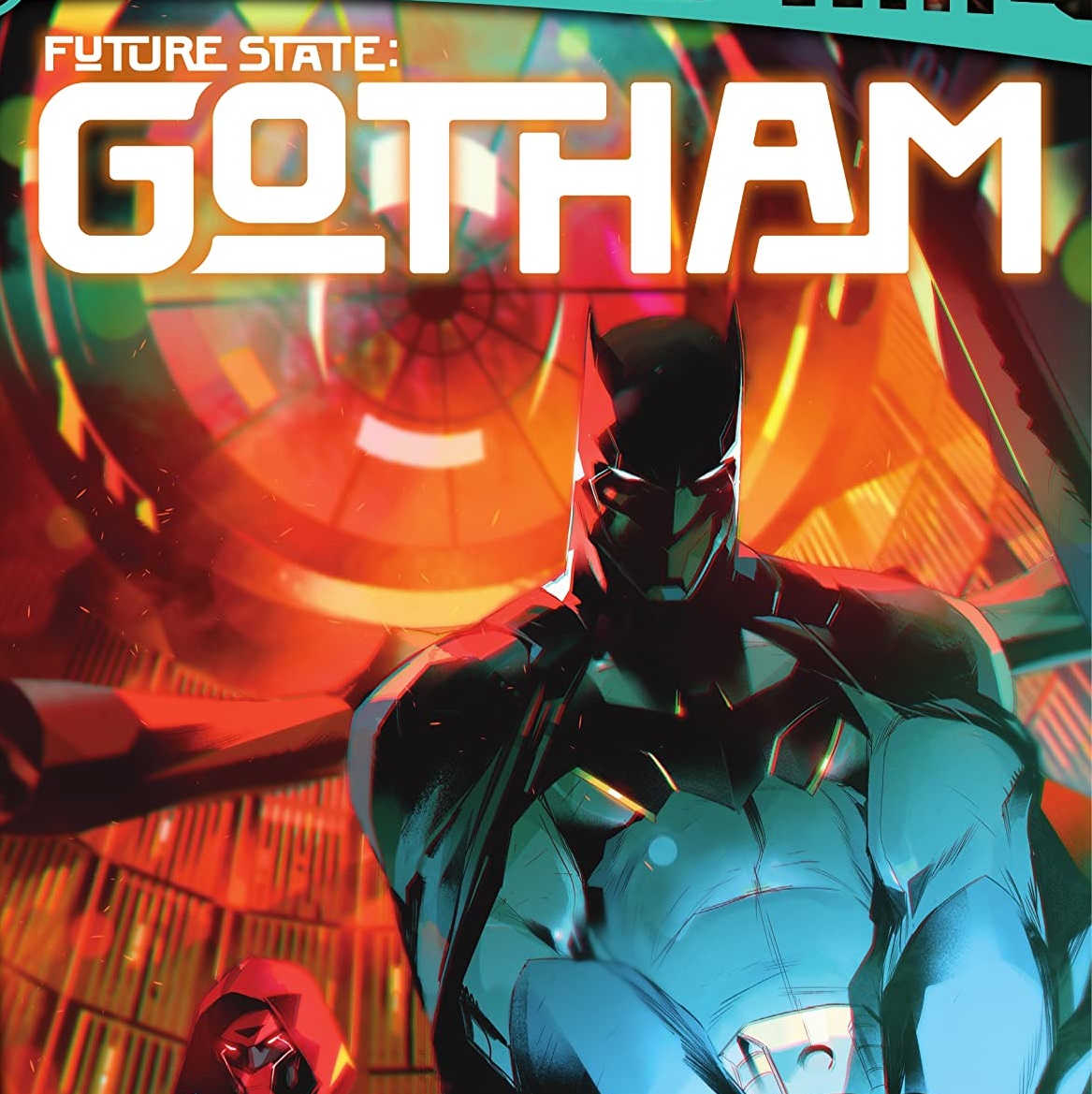 Overview: In Future State: Gotham #5, Red Hood and the next Batman must team up with the Arkham Knight to discover the secrets of the Warmonger!

Synopsis (spoilers ahead): Future State: Gotham #5 begins in the past, as White Rabbit murders Mad Hatter to steal his tech for Astrid Arkham, the Arkham Knight, so she can control murderers to force them to help others. In the present, Warmonger uses the Hatter tech to control Jace Fox Batman and Red Hood, fighting in his pit, as he tells Astrid his origin as a prisoner of the Magistrate, freed by the Arkham Knights, blowing a giant bat crater in Gotham, and saturating the air with Hattertech to control the whole city. Warmonger tortures Astrid and discovers that he needs a transmitter – a Hat – just as Jason uses his mask to free Jace from the effect of the mind control. Jason then uses his new Peacekeeper status to summon Magistrate Cybers to attack Warmonger’s base, allowing Jace and Jason to rescue Astrid. Along the way, they learn that Warmonger was a prototype for the Peacekeepers and that they need to hit Magistrate headquarters to stop him.

Dick Grayson, Duke Thomas, Stephanie Brown, and Tim Drake see a broadcast that Peacekeeper-Red has captured the Next Batman and taken him to headquarters.

Analysis: More pieces explaining the strangeness of several of the Future State stories fall into place in Future State: Gotham #5, with the thread of Mad Hatter’s corpse in the Red Hood backup, the villains being heroic in the Arkham Knights and semi-friendly in Batgirls – all tied together in a big underworld plot of the use of Hatter tech by underworld figures to try to overcome the Magistrate for evil purposes, instead of the hero’s goals of overcoming the Magistrate to free the citizens of fear. It’s also extremely fun seeing the funhouse mirror version of the current Fear State storyline being played out in the Future State timeline – since Scarecrow is using a lot of Mad Hatter tech to warp and control the population of Gotham in the present day, especially our heroes.

Though the fun interplay between Future State and Fear State does provide a lot of enjoyment, the actual plot developments are a bit disappointing. Jason and Jace’s plan is pretty basic – we have seen variants of it with Jason over and over again in the past decade – Batman and Robin Eternal, Robin War (both times with Jason playing the game with Tim). The inclusion of small Easter Eggs like Bethany Snow the tv reporter from the silly but fun Channel 52 backups from the New 52 era was clever and fun. The art by Giannis Milonogiannis continues to be functional, though the lack of coloring also continues to be perplexing unless it really is a cost-saving thing and DC is attempting to persuade readers that the lower-effort production is worth the same price because of the reprinted backup stories. This time “Into the Circle” from the 2013 Batman Black and White series, written and illustrated by Rafael Grampa, is reprinted.

Simone Di Meo provides the main cover, spoiling the final page of the interior, where Peacekeeper-Red captures the Next Batman, with his trademark flashy colors and bright contrasts. Variant cover artist Rose Besch continues her series of gorgeous variants, this time featuring White Rabbit, after issue #3’s Nightwing and Spoiler, next issue’s Cassandra Cain, and issue #7’s forthcoming Bruce Wayne variant. The anime/manga influence is made incredibly clear in both the main and variant covers of this series, with the main covers highlighting the more cyberpunk, hard-edged side of manga and the variants tending to give a more action/adventure with a strong element of cuteness.

As Red Hood and the Next Batman find themselves at the mercy of Warmonger, secrets are revealed, which illuminate many of the puzzling mysteries of Future State’s original event, at long last.