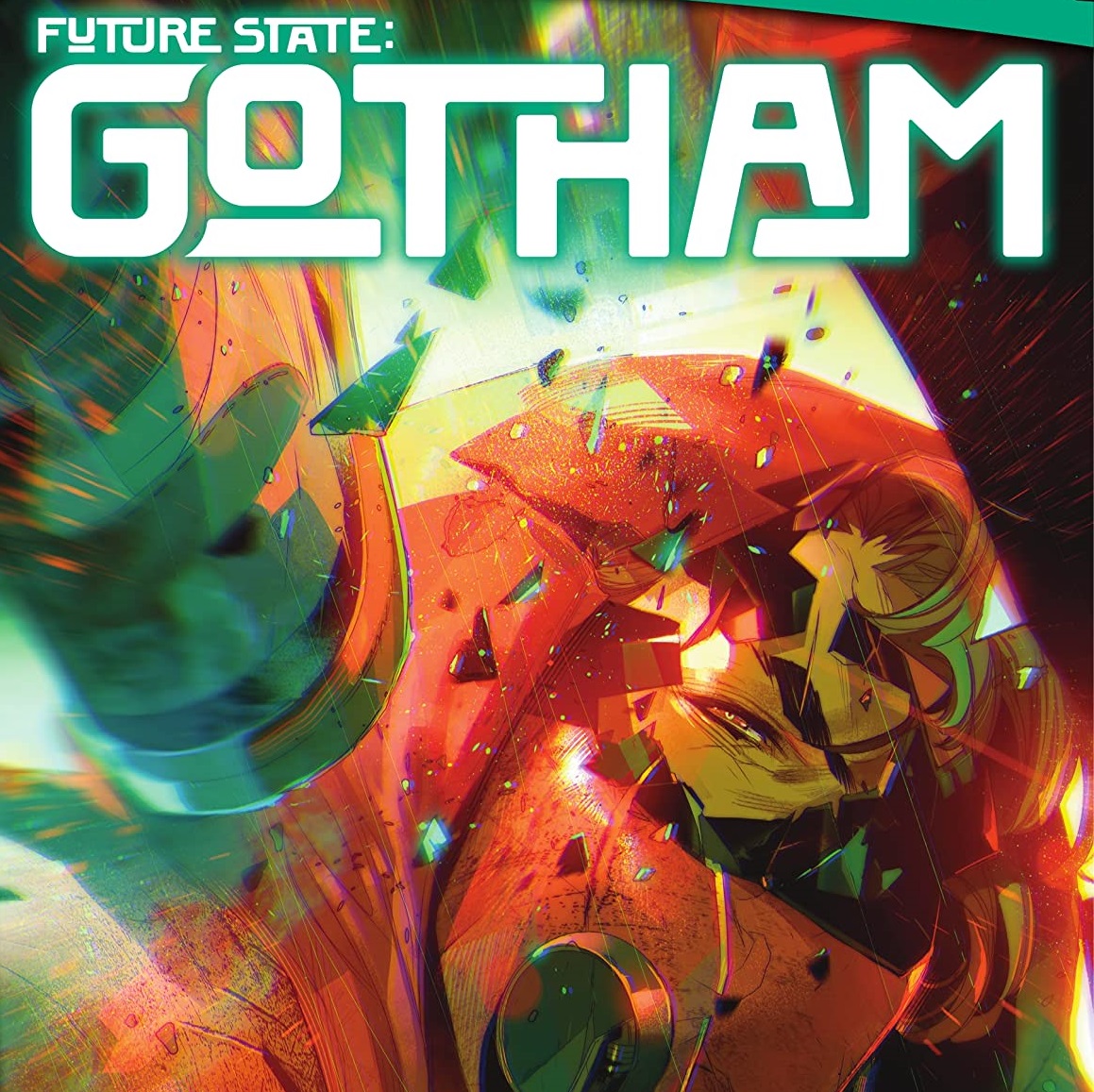 Overview: In Future State: Gotham #6, the Bat-Family collides violently with Warmonger’s forces as they hurtle towards the series’ first arc conclusion.

Synopsis (spoilers ahead): Nightwing orders Duke, Steph, and Tim to stand down instead of rescuing the Next Batman from Peacekeeper Red. While at Magistrate Headquarters, Jason takes his “prisoner” onto an elevator, where he and Batman knock out the guards, just as Warmonger breaks in through the roof and steals Mad Hatter’s hat to control all the mind control nanites he exploded into the air with the bat-shaped crater in Future State: Gotham #1.

Red Hood and Batman fight their way through Warmonger’s controlled minions, as they are immune to his mind control thanks to Jason’s work in the last issue. Jason realizes that Jace has to stop his family while they are controlled by Warmonger, and Jason must fight Warmonger alone.

Analysis: Future State: Gotham #6 feels a tad short, building to the climax of the story’s next issue, which teases that Red Hood may die. However, seeing the various pieces of the Future State event at the beginning of the year and finally have answers with the Hatter tech, as well as the connection to the current Fear State event’s use of the same technology, Future State has become much richer in resonance.

This first arc doesn’t promise to leave any of our characters in much better positions than they were at the start, but hopefully, it’ll be popular enough that they can start working away from the dystopia that DC saddled them with – as well as widening the lens of the story to feature more than Jason and the Next Batman so tightly. I go back and forth on whether or not the use of the same tropes that often feature with Jason (and many adventure stories, to be fair) such as the “fake prisoner” gambit (seen in such classics as the first Star Wars film) represent a firm grasp of Jason’s character or perhaps an overreliance on standard storytelling structures. Either way, it works reasonably well here, though admittedly, this issue felt very transitional, and didn’t feature that many setpieces or character moments that will really settle in memory. That being said, it does get our heroes into place for a grand finale – facing both Warmonger and the Bat-Family controlled by Hatter tech – which hopefully will satisfy those who’ve waited almost a year for some development.

Artist Giannis Milonogiannis continues to provide dynamic, sketchy visuals in the black and white style chosen for this book, and though I still think it would be better if the book were in color, it doesn’t suffer too much from the lack of coloring and allows for an opportunity to explore black and white stories new and old for fans to discover, such as the bonus story from earlier this year – Jorge Jimenez’s Batman and Damian story “Father and Son Outing” from the most recent iteration of Batman: Black and White. A delightful story, one beloved by many at TBU!

Simone Di Meo’s cover shows Red Hood’s mask being broken in an incredibly dynamic image, the shattered fragments flying out towards the viewer. Rose Besch provides a variant to match issue #3’s image of Spoiler with one of Cassandra Cain, who flies through the air towards the viewer very similar to Steph’s pose three months ago.

Though this issue spends most of its time setting things up or explaining how the beginning of the series worked, the pleasure of seeing how the Future State story is mirroring the current Fear State event buoys up the fun character work and solid artwork.