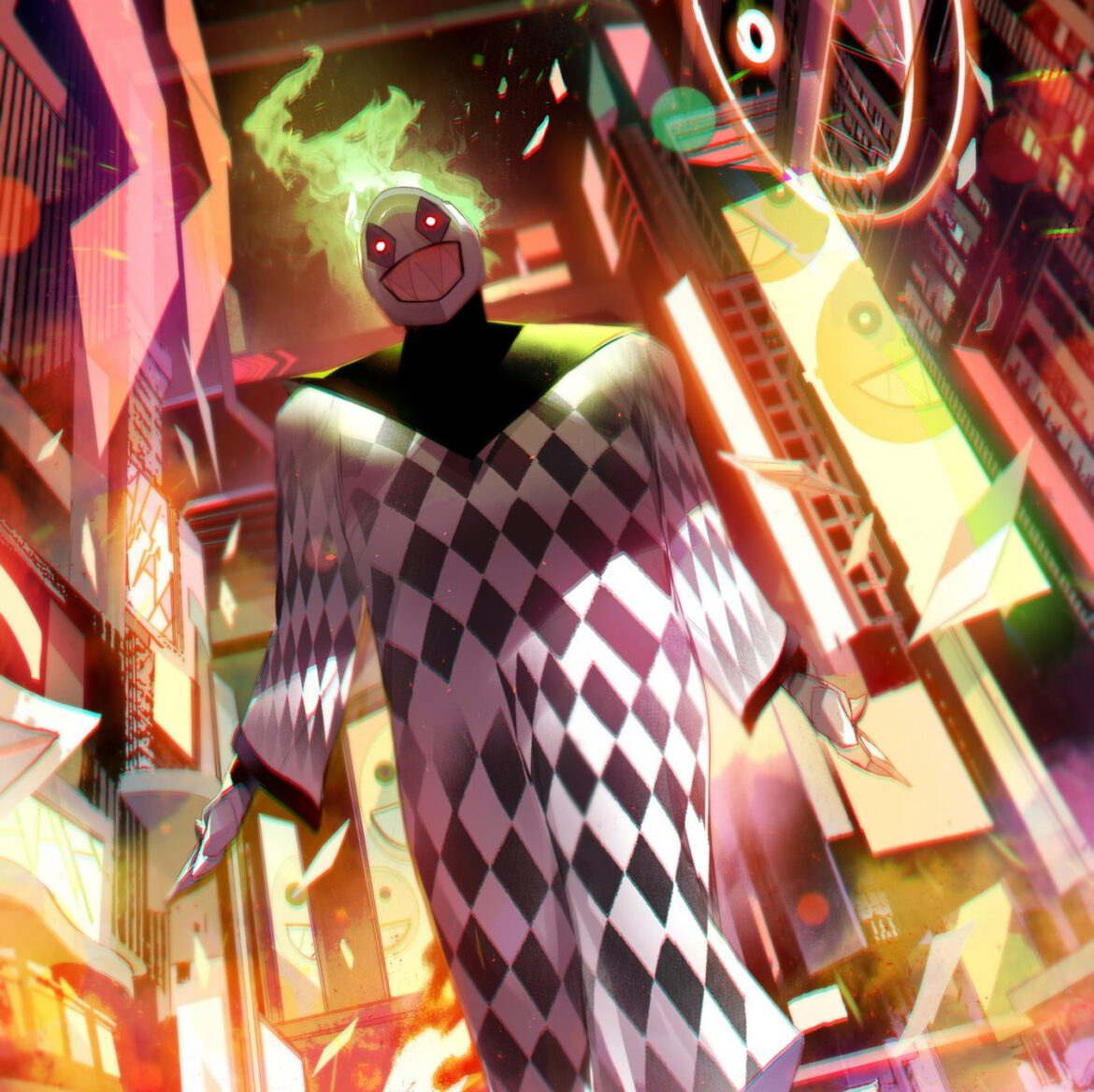 Overview: In Future State: Gotham #8, Grifter faces a sticky situation when the Next Joker comes after him.

Synopsis (spoilers ahead): As Future State: Gotham #8 begins, a cornered Grifter fights to get a woman calling herself “Operator”, after Warmonger’s prison riot sprung him from Blackgate in the last arc, which was a result in itself of Grifter’s shenanigans in the main Future State storyline.

Meanwhile, Hush mixes drinks, talking to a holo-conference of the Whale (mob boss), the Owl (the Court of Owls), and the Dog (crooked cop), the new Terrible Trio, who are threatened by the Operator’s escape (because of their own plans to destroy the Magistrate and take over Gotham for themselves). Hush says to kill everyone involved in the Operator’s escape, their own men included.

At Grifter’s safehouse, the Dog’s cops face off against a Talon and mobsters in a Mexican standoff, but a massive clown arrives and starts killing EVERYONE. Operator realizes that the Next Joker has started chasing them, and they climb down into the Bat-crater to escape. However, the Next Joker jumps all the way down into the crater after throwing several headless bodies down (followed by the heads), then survives all of Grifter’s grenades and bullets before literally biting his head off.

Analysis: Dennis Culver takes over full writing duties as Joshua Williamson focuses on the recently announced Shadow War (Batman, Robin, and Deathstroke Inc. crossover starting next March), with his partner from his Harley Quinn vs. Punchline fill-in issue, Nikola Cizmesija, providing the black and white pencils and inks for Future State: Gotham #8. The art is a bit more coherent than that fill-in issue, though it still lacks the easy appeal and stronger sense of assured linework that Giannis Milogiannis, the main artist for the first arc of this series. Nonetheless, it seems like the series will be on relatively solid footing artistically with the creative team shift.

Culver’s last tale was a relatively decent one-off, which also clearly laid the groundwork for this Next Joker character introduced in these pages, and the solicitations for the next two months indicate that more connections to that issue will be established with the origin of the monstrous clown. I understand the impulse to create a new Joker who shares one thing in common with the original (the clown theme), but in all other ways, this Joker is different – where the Joker is emaciated, this Joker is thick-bodied, the Joker’s signature hyper-angular, stretched face, with its shapes of triangles and curves is replaced by a creepy round head, and where the Joker constantly babbles, this Joker just silently eats people. There’s a certain thought process that makes this kind of “legacy by opposite” make sense, but we’ve seen so many “future” or “legacy” Joker characters before, from Dick Grayson in The Dark Knight Strikes Again, to Smiley in We Are Robin, which worked better (and if I’m saying that Dark Knight Strikes Again worked better, that’s a pretty damning indictment in my evaluation). The desire to make new versions of old rivalries is a rich and fertile narrative legacy – the five Robins and three Batgirls in current continuity prove that, with their differences and similarities, but this Joker feels much more like an attempt to port a Venom or even horror/slasher movie villain into a clown suit than something which actually plays with the thematic potential of the Joker vs. Batman conflict.

Hopefully, future issues will flesh it out so it has more of that depth, but currently, this was not a particularly impressive debut. Add to that the fairly nasty killing of our main viewpoint character, who himself was pretty generic for those who haven’t read up on the Wildstorm material, and the issue simply doesn’t have many hooks for attachment. The reference to the Huntress and Luke Fox story from Future State: Grifter, and the possibility that Operator might be Frankie Charles from the Batgirl of Burnside run gives us a sense that there is still something going on outside of the overwrought slasher structure of the main story, and the creation of the new Terrible Trio actually provides some dark chuckles. Overall, one hopes Future State: Gotham starts using more of the actual Gotham cast, instead of continuing to only use Jason and Jace Fox. Solicitations are not at all promising, however.

Nick Dragotta’s black and white tale “Legacy” from the recent Batman: Black and White series provides this week’s bonus tale, a wacky but beautifully illustrated short that riffs off of Frank Miller’s famous “You have eaten well” dinner scene from Year One.

Simone Di Meo continues to provide covers for this series and gives readers a full body shot of the Next Joker, showing his differences with the original Joker – the body type, face shape, and pose, surrounded by the typical cyberpunk Future State backdrop. Kim Jacinto draws the Grifter cardstock variant, showing the Wildstorm antihero posing in front of a cyberpunk motorbike similar to a neon version of The Dark Knight’s Batpod. The cardstock variant feels quite bare and overly blank after the intricate, pastel-neon variants Rose Besch provided for much of the past seven issues.

An entrance riddled with cliches and understandable but uninspired choices hampers the entrance of our new supervillain, as none of our main characters arrive to give our story any kind of heroic interest or agency.