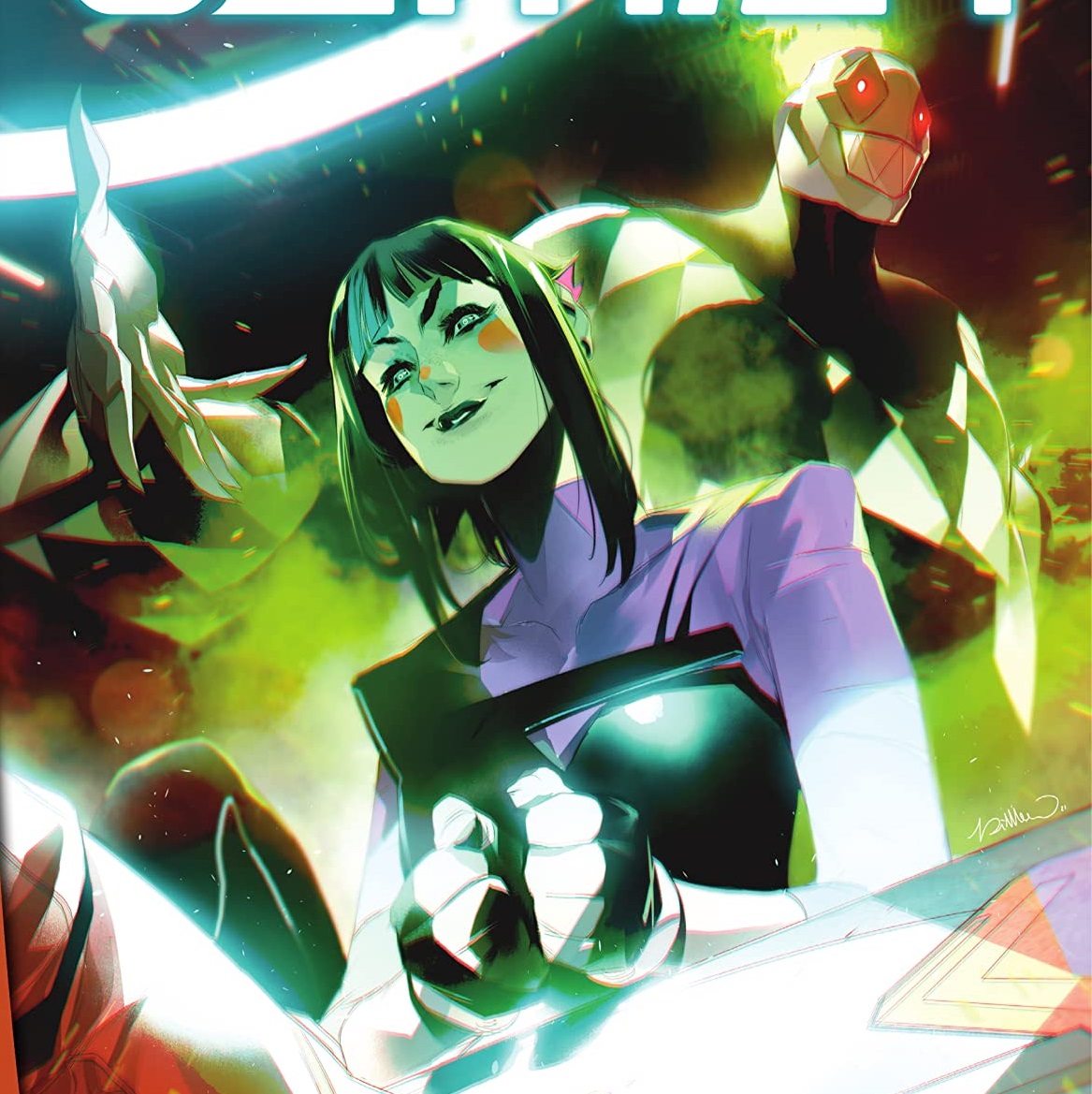 Overview: As the Next Joker stalks the new Terrible Trio in Future State: Gotham #9, Hunter Panic teams up with Jason Todd to uncover his secret.

Synopsis (spoilers ahead): Future State: Gotham #9 begins with Jason lying in bed, as he remembers the Joker killing him and Rose leaving him. Peacekeeper-03 calls and orders Jason to investigate bodies in the Bat-crater. Jason, aka Peacekeeper-Red, finds the headless body of Grifter from the last issue, and when Hunter Panic arrives, Hunter begs for Jason’s mentoring. The team finds a survivor babbling about the Next Joker.

In an alleyway, Nightwing breaks up a “Brane” drug deal, and Talia al Ghul emerges, confronting Dick with the dangers of his microdosing with Brane, the latest variant of Venom – but then asking him to mainline it to help her find Damian.

In Blackgate, Jason and Hunter Panic interrogate Punchline, who tells them about the terrifying fanboy who became the Next Joker with enhanced abilities. Punchline makes a deal to get out of Gotham in exchange for more information about the survivor, Operator, one of Oracle’s old associates, who was helping keep the new Terrible Trio safe – but one of them, the Owl, has disappeared.  Jason and Panic hit the streets, but Hush blows up the Dog (the police member of the Trio), and they dash to find the Whale, the last surviving member. The Next Joker hitches a ride on the Whale’s helicopter, but the Next Batman arrives for a big confrontation in the air!

Analysis: Dennis Culver’s second full issue as main writer of Future State: Gotham continues to build on the storyline he ran in his solo interlude in the first arc, where Harley Quinn, Hunter Panic, and Punchline fought their way through the Magistrate’s Gotham. The references to the current Punchline backups in James Tynion’s The Joker series provides a nice link to current continuity despite the fact that Future State no longer connects with the current timeline’s sequence of events (given Fear State’s destruction of the Magistrate). As a whole, the story is reasonably tight, but Culver hasn’t really developed our cast enough to provide a lot of emotional connection. Hunter Panic has a tiny bit of development in asking to become Jason’s protegee, but not nearly enough for emotional engagement, both for those who loved the original Mother Panic and are annoyed by this interloper, and those who disliked Mother Panic and find the paper-thin character using her suit a double bother. In a similarly thin use of continuity (unlike Punchline’s fairly solid reference), Operator (Frankie) from the Burnside Batgirl run shows up, but has no character or motivation, merely plot-related and confusingly villainous actions. Jason gets a nice though cliched, dream sequence to give him some emotional status information, but the Next Batman swings into an action scene without any character.

The one piece of the story in Future State: Gotham #8 that really provides some emotion in addition to intrigue is Nightwing’s drug-addled confrontation with Talia and the long-awaited beginning of the mystery of Damian’s absence during all of Future State. Hopefully, that story, which at least gives lip service to more of the Bat-Family than the already heavily featured Jason and Next Batman, will take over after this first main arc featuring the Next Joker. As for that rotund clown, he continues to have an interesting if overly opposite design from the original Joker, but doesn’t really provide much more than a cliched horror movie villain chasing down terrified victims in his appearance this issue. There’s no humor or wit in his plans, just deliberately chosen “Hawr hawr” instead of “Ha ha” laughs as he rips off doors and bites off heads.

Giannis Milonogiannis continues to provide solid pencil – it appears that his continued work on the series has led to stronger linework and a better utilization of the black and white palette, giving readers more contrast than the first few issues tended to provide.

Gabriel Hardman and Corinna Bechko’s Black and White story, “The Spill,” rounds out this issue’s pages.

Simone Di Meo provides our main cover, once again giving us a Punchline image – this time of her in prison, matching the story, with Jason’s glove confronting her, and the specter of the Next Joker behind. A bit too busy, as much of Di Meo’s art can be, but striking and good to see it reflecting the interiors. Mike Bowden provides our cardstock variant, a full body shot of Peacekeeper-Red, with the Next Batman looming behind in the rain – a bit generic, though a nice enough image in a more standard comic style instead of Di Meo’s striking digitally painted look.

Though characterization is a bit lacking for everyone involved in this arc, the storyline continues to build. Also, it looks like we might get an answer to why Damian was absent during Future State.