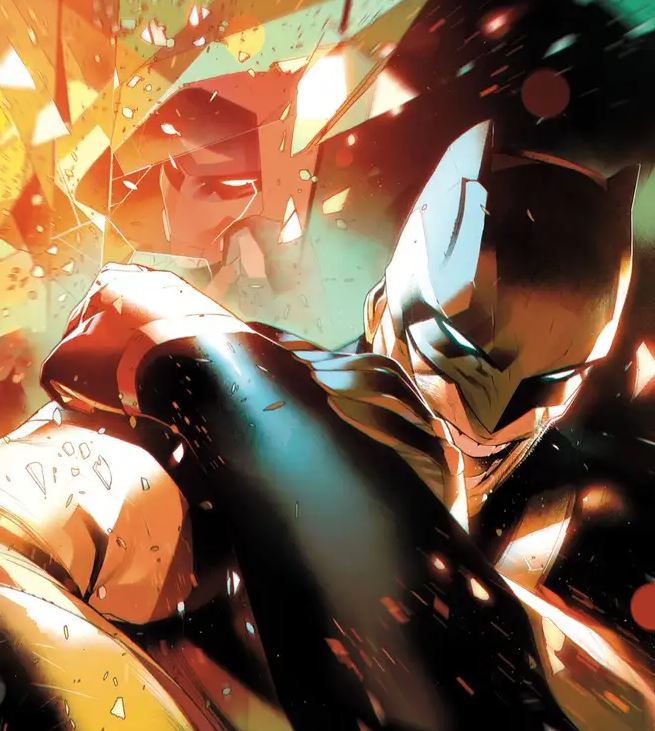 Synopsis (spoilers ahead): As Future State: Gotham #14 begins, Hush greets a retired Thinker as he returns home from the grocers, forcing him to take the Brane drug to see what a Brane-addicted Nightwing (Batman) is up to. Meanwhile, Damian (Batman 666) torments Magistrate troops with Hellfire Batarangs, sowing chaos in Gotham.

Jace Fox (The Next Batman) teams up with Hunter Panic and Peacekeeper Red (Jason Todd) to take down Batman 666, while Hush kills Thinker after the Brane destroys his brain. Oracle (Barbara Gordon) hunts down Talia al Ghul and Nightwing’s Brane drug supplier, but Nightwing (as Batman) tries to force her and Jace to shut down and let him run Gotham as its only Batman. After beating the Next Batman down, Dick Grayson storms off, and Babs sadly chases after him.

To add to the staggering number of Batmen in Gotham, Hush reveals he’s made his face into Bruce’s again, and he becomes yet another Batman.

Bruce and Talia arrive, hunting for Damian, who runs into Hush first. The false Bruce embraces Damian and says that they will burn Gotham down together.

Analysis: Perhaps having heard all the frustration from reviews such as this series about how narrow the focus on Jason Todd and Jace Fox was for the first year of this title, writer Dennis Culver and artists Giannis Milonogiannis and Geoffo decided to start adding characters into the spotlight at a ludicrous speed. Hilariously, almost all of the new characters are Batman – Damian Wayne as Batman 666, Nightwing as the future-drug-addicted Batman Who Works Alone, Hush as the False Batman, Jace Fox as the Next Batman, and, of course, Bruce Wayne, the Beloved Batman (of Talia and of the fandom).

This quintet of Caped Crusaders careen about Gotham with extremely poorly defined purpose – what motivation they have is mostly to fight each other. Like Marvel Comics of the last ten years, these “heroes” seem to exist mostly to growl at each other and hit each other in the face against a dystopian backdrop. All of this isn’t very much fun if you stop to think about it, but on a very surface level, the goofiness of five Batmen hitting each other (or conning each other, in Hush’s case) has a madcap energy that can perhaps sustain another two or three issues. It is a bit fun to have a TV newscaster page make the joke about The Dark Knight Returns‘ famous interlaced media commentary, but the writing for that page is so thin and humorless that it overstays even its brief welcome. All in all, Future State: Gotham has become Future State: ALL the BatMEN. One just hopes that they don’t try to kill Bruce off for a third time in the already funeral happy Future State timeline.

The truly ludicrous befuddlement of this installment of The Next Batman puts the minor confusion of Aquamen and Batgirls to shame as the quintet of Batmen wander through Gotham, taking drugs, dealing out hellfire, and hanging out with their baby mamas.