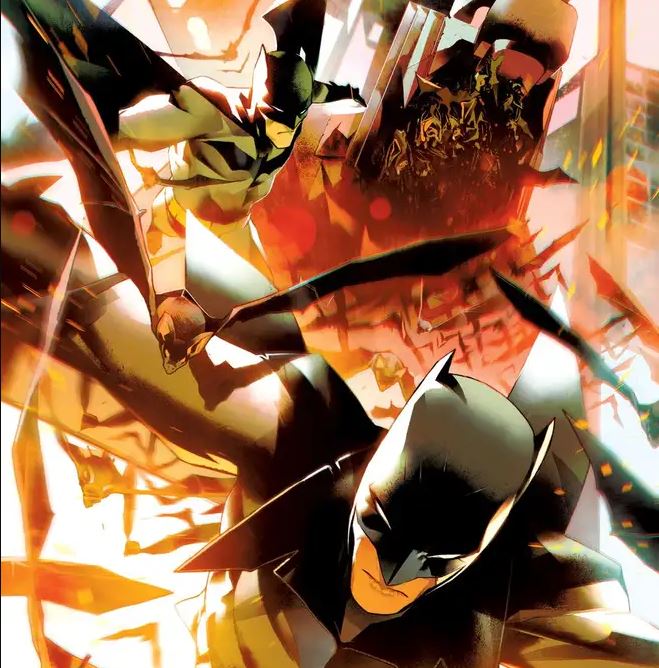 Overview: In Future State: Gotham #15, the entire Future State Bat-Family collides with the five Batmen running around Gotham in a chaotic pile-up that only becomes more incoherent.

Synopsis (spoilers ahead): As Future State: Gotham #15 begins, Jodi Hunter Panic flies above the streets of Future State Gotham, radioing Jason Todd (Peacekeeper-Red) as they search for the “true” Batman. Jason finds Bruce Wayne and Talia al Ghul in a backup Batcave. Jason refuses to believe it’s Bruce, having been tricked by Hush for too long, and Talia disables him with a sword stab from behind. Bruce is angry, but he leaves with the Batmobile to find Damian Wayne (Batman 666), only to be attacked by Hunter Panic, forcing Bruce to destroy Hunter’s plane.

Damian recounts his time in Hell to Hush, thinking he’s talking to his father. Hush pushes Damian to destroy Gotham, claiming that the “three Batmen” from the RIP storyline are Bruce, Dick, and Jace Fox.

Hunter Panic patches Jason up, and they receive a call from Jace Batman, who is under attack by Damian and Hush.

Analysis: Dennis Culver and Giannis Milonogiannis continue the saga of Five Batmen vs. The Bat-Family in Future State: Gotham #15. Sadly, they rely on cliche after muddled cliche to push the story forward – all of it centered around the tired insistence on the heroes fighting – Jason and Bruce, Jace and Damian, Dick and the Bat-Family. Every motivation has been seen before and done better, from Dick suddenly becoming Bruce and insisting “I work alone,” to Jason stupidly insisting on fighting the real Bruce instead of some kind of actual connection between the characters (ridiculous, given the history between Jason, Bruce, and Talia). Damian attacking Jace makes the most sense, since those characters have never interacted, but the idea still falls into the frustrating pattern of the other two plotlines.

Giannis Milonogiannis’ art continues to be strong, but it also continues to not really stand out. Drawing a huge number of characters in this issue, all of them look reasonably good in close-up but fade into interchangeable figures in the distance. One wonders if the finale will fade into color as the drug sequence from a few issues back did, but no guarantees.

Guillaume Singelin’s future story featuring Cassandra Cain rounds out this issue from last year’s Batman: Urban Legends #7 all future, all the time special – though interestingly, keeping the original color from that story.

Simone di Meo’s main cover displays Damian Batman 666 teaming up with Hush “Batman” amidst a flock of black and red bats, showcasing his trademark energetic digital painting style. Mike Bowden’s cardstock variant shows a Batman in the classic Hush suit running off a rooftop alongside Jason Todd Peacekeeper-Red, both of them extremely bulky with muscle.

The insanity of the concept of Five Batmen vs. The Bat-Family is sadly not borne out by the sadly predictable and cliche-ridden execution of this issue.