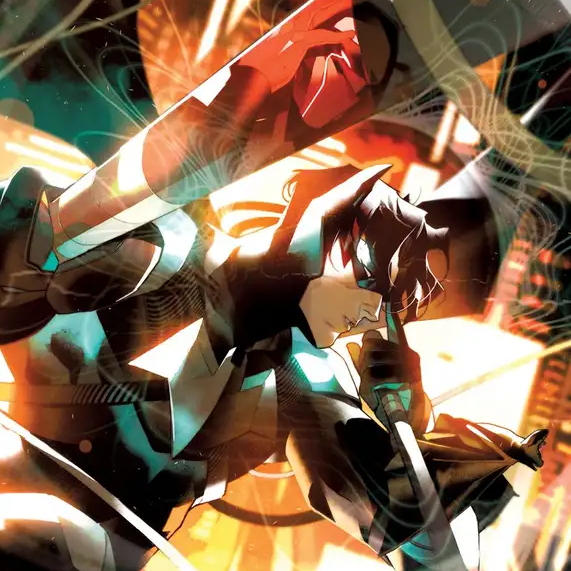 Overview: In Future State: Gotham #16, all five Batman – Damian, Jace, Hush, Bruce, and Dick – collide as our series begins to move towards its climax.

Synopsis (spoilers ahead): Future State: Gotham #16 begins with Damian Wayne (Batman 666) using his hell-spawned powers to make Jace (The Next Batman) relive his hit-and-run that drove him to seek redemption, as Hush Batman (disguised as Bruce) urges his “son” to murder Jace. Jace breaks free from the tormenting visions and fights back. Hush overwhelms him, but Jason (Peacekeeper-Red) and Hunter Panic join the fight, evening the odds.

The Bat-Family (Tim Drake as Robin Eternal, Barbara Gordon as Batgirl/Oracle, Kate Kane as Batwoman, Cassandra Cain as Orphan, Stephanie Brown as Spoiler, Harper Row as Bluebird, and Duke as Signal) face off against Dick Grayson (who is also dressed as Batman), who is hopped up on future-vision drug Brane. They press Dick hard, so he overdoses on Brane and somehow makes them all fall asleep except Babs.

Jason, Jace, and Hunter Panic battle valiantly against Hush and Damian, but none of our heroes are at full strength. The real Batman (Bruce Wayne) and Talia al Ghul arrive in a car that leaps buildings with a single bound, and Bruce pleads with his son against Hush’s deception. Damian gives into his rage and tries to kill them both and destroy Gotham, but Nightwing zaps him with his drug powers, declaring that he’s the only true Batman and will never die.

Analysis: Future State: Gotham #16, while it continues to mostly present shallow, frustrating conflicts between our heroes, does have a few really solid character moments. After over a year of Jace Fox, The Next Batman, being pretty cardboard and replaceable in this series, writer Dennis Culver finally reaches into John Ridley’s backstory of Jace’s hit-and-run that killed a boy to give his character depth and strength as he overcomes his guilt to fight against Damian’s hellspawn power. That fairly powerful moment is overwhelmed by the silly shallowness of the other four Batmen. Damian’s motivation is one note and annoying, Hush’s cackling palls after one page, Bruce shows up for two pages only to fail to convince his son of his identity,…and then we have Dick Grayson.

Dick’s drug powers make zero sense? How does he fly and zap people because of a drug overdose? Seeing the future at least has a history with “spice” from both Dune and Star Wars giving future seeing powers, but…a drug that just gives you any plot-convenient powers epitomizes the laziness of the writing in this book. Additionally, having him just overdose on drugs that gives him all the power he needs to make the plot move forward, instead of, you know, killing him like drug overdoses usually do…just weak stuff. It’s possible we’re moving towards a tragic ending for Dick, where he sacrifices himself for the future, but that doesn’t make the convenience of his powers any better. Add to this terrible construction the weak dialogue – Jace yelling about being on fire but now having the smoke – and the book continues to fall at the bottom of the DC’s craft evaluation.

The art by Geoffo is reasonably effective, but compared to the vivid art seen in the backups (taken from various Black and White collections over the past two decades), it’s not quite dramatic or powerful enough to carry the weak writing forward.

Simone di Meo’s main cover nicely captures Nightwing/Batman’s psychedelic experience, with a neat effect of Peacekeeper Red reflected in his weapon. Mike Bowden gives us a look at Batman 666 in all his collared glory on the cardstock variant, which is cool, though the tombstone/cemetery setting feels a bit off for this cyberpunk series.

The continued shallow writing gets a slight boost with a well done deployment of Jace Fox’s backstory, but the absolutely bizarre use of a drugged up Dick Grayson drops the book down again.