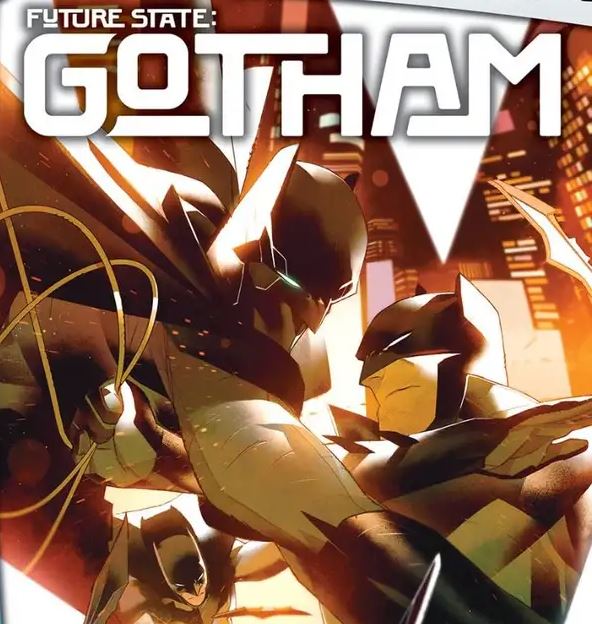 Overview: In Future State: Gotham #17, the Batmen fight and regroup as Hush’s true plan reveals itself in all its absolutely ridiculous glory.

Synopsis (spoilers ahead): Barbara Gordon (Oracle) chases Nightwing/Batman after his radical display of drug-fuelled power last issue, as the rest of the family wakes up. She finds the battle royale between the Batmen, plus a stabbed Jason/Peacekeeper Red. They try to figure out which Batman is which and who’s on their side, confirming that the final Batman is really Bruce Wayne. Talia al Ghul and Hunter Panic mix it up with various combinations of Batman until Hush convinces Damian to retreat. The remaining Batmen and other characters talk, Bruce and Jace form an alliance, but Nightwing crushes their headgear and flies away, deluded into thinking he must save the city alone.

Alone, Hush reveals his true plan for Damian – releasing the evil spirit who hitched a ride with Batman 666 from Hell. When Bruce and his team confront the villain and Damian, Hush launches a counterattack with the Court of Owls, then shoots Bruce three times in the body, releasing the spirit of Joe Chill.

Analysis: Writer Dennis Culver and artists Geoffo and Giannis Milonogiannis produce this penultimate issue in the year-and-half-long Future State: Gotham saga with a sense that the original plan for this book probably was a lot more ambitious. We have sketches of the relationship between Jace Fox and Bruce Wayne, where Bruce seems to think that Jace has made Gotham “his city” – despite the fact that we really didn’t get a lot of actual character development or motive for Jace until very recently (with the flashback to the hit and run he perpetrated in his youth), and Bruce’s statement falls completely flat as a result.

The concept of a huge number of Batmen all fighting for control of Gotham has an amusingly bonkers quality to it, but the execution is risible, especially when it comes to the depiction of both Damian Wayne and Dick Grayson. Having Damian possessed by Joe Chill is beyond ludicrous, especially with absolutely no setup for why Chill is important or even why he might be possessing Damian. And Dick’s ridiculous powers given to him by the drugs he’s been mainlining make the silliest gamma radiation origin story seem sensible at this point – precognition, flight, the ability to black out huge groups of people with his mind – it’s just too silly.

Though the art struggles valiantly to make everything work in Future State: Gotham #17, the combination of simple lines without serious inking and no coloring leaves the world feeling overly sketchy rather than moody and atmospheric. If the art made stronger use of deep shadows, really leaning into the emotive aesthetics of noir or hardboiled detectives, I think it could help, though the writing would definitely still hold it back.

Next month, the book comes to an end, and sadly, despite the huge push DC gave the Future State branding with the two-month event and then this ongoing series, I think it will be forgotten in November. When compared with the huge number of future Batman stories that came out alongside it – Batman/Catwoman by Tom King, Beyond the White Knight by Sean Murphy, Batman: The Detective by Tom Taylor, Batman Beyond: Neo Year by Collin Kelly and Jackson Lanzig, Catwoman: Lonely City by Cliff Chiang, this Future State ongoing just doesn’t stand out at all in terms of memorable art, character work, or plotting.

The clever but a tad silly “She Lies At Midnight” Batman and Catwoman story fills out the pages with Adam Hughes’ art and writing.

All in all, this penultimate issue begins to show the outline of where the book will wrap up next month, but the characters and revelations suffer from ham-handed exposition rather than elegant setups and payoffs, plus serviceable but uninspired art.