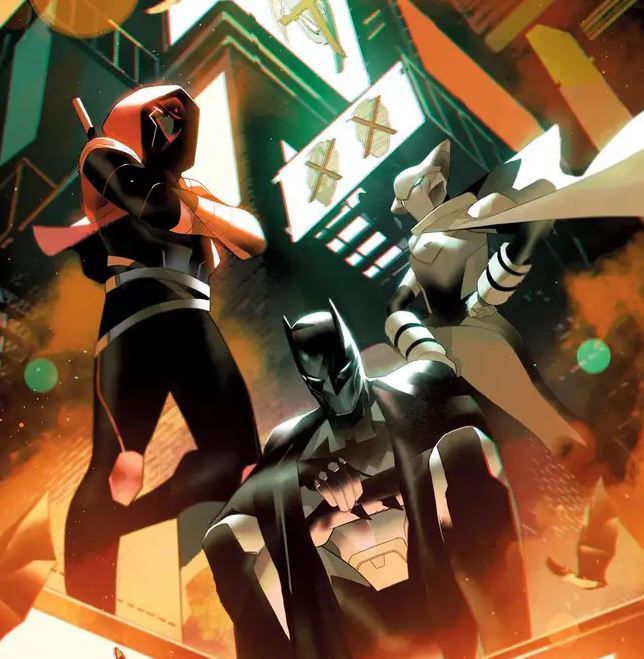 Overview: After a year and a half, the series comes to a close with Future State: Gotham #18, as all of the Batmen, face their destiny at the end of drugs, fists, or guns!

Synopsis (spoilers ahead): As Future State: Gotham #18 begins, a quick page speeds through the life of Joe Chill, his suicide, and his escape from Hell by possessing Damian (Batman 666). Hush eggs Chill and Damian to finally kill Bruce Wayne as the other Batmen and Bat-Family battle furiously with the Talons. Talia destroys the “gun of Joe Chill,” but Hush and Chill persist. As Hush’s forces seem to be winning, Nightwing/Batman, juiced to the gills with Brane drug, attacks Chill/Damian. Jason works to get an injured Bruce to safety while Talia dives back into the fray, and the Bat-Family defeats the Talons. Nightwing tricks Joe Chill into leaving Damian’s body and entering his own, kisses Barbara, then overdoses on Brane, blowing himself and Chill up in a massive burst of blue energy. Hush tries to escape, but Jason catches him. Damian, Talia, and Bruce embrace and resolve to work to heal together.

Weeks later, as Jason takes over policing in Gotham, winning the public’s hearts and minds away from the Magistrate, Bruce and Jason meet on a rooftop and are surprised by Jace in a new Batsuit. Bruce says that Jace is the only Batman now because of his injuries and wishes Jace, Jason, and Hunter Panic well.

Analysis: Dennis Culver brings the Future State storyline to a close, at least for now. Josh Williamson was given the task of continuing the two-month alternate future storyline, but his workload forced him to drop the book. That left Culver to take over, and the book didn’t suffer a very big drop in writing quality – though, in my evaluation, that’s because the quality was pretty mediocre to start with.

A decent concept – “how to tie together all of the Future State Bat-Family titles, make new characters, and develop the world of Future State more” became a flat comic mainly consisting of uninspired punching scenes. The richness of the cast available to the team was completely wasted by focusing on the characters who already got the lion’s share of time – but those characters (Jace, Jason, and Nightwing) didn’t even get to do that much that was interesting.

It’s pretty clear that Culver and Williamson’s plan went far beyond the year and a half they got, as the ridiculously rushed introduction of Joe Chill’s motivation and worldbuilding surrounding his plan shows in this final issue, not to mention the rushed off-panel victory over the Talons. The sheer ridiculousness of having so many Batmen fighting each other in this final arc had a certain “so bad it’s good” quality to it, but in the end, Nightwing’s sacrifice was completely unsatisfying – not even leaving the reader sad, as his characterization in the book is ridiculously unlikeable, and his costume emphasizes just how dumb everything he does and says is. Relying completely on reader affection for characters isn’t a great idea in the best of stories, and Future State: Gotham was sadly never the best of stories, even in its own category of “Alternate Future Batman” – when Beyond the White Knight, Batman/Catwoman, Batman: The Detective, Catwoman: Lonely City, and Batman Beyond: Neo Year all released during the same time.

Justin Greenwood takes over art for this last issue, and sadly, his exaggerated heads and facial features don’t blend well with Geoffo and main artist Giannis Milonogiannis’s cartoony but more controlled anatomy and acting. Brad Simpson provides the colors this series has generally eschewed, and they’re fine but don’t really pop the way the colors in Nightwing’s previous drug vision did.

All in all, though the art in this series has never been terrible, it’s also never really highlighted the moodiness possible with a black-and-white comic, relying too much on lightly sketched/inked linework of reasonable appeal but no special compositional interest. The somewhat jarring nature of the final issue having a completely different artist doesn’t help – it’s always disappointing to have the series finale drawn by someone who didn’t have an investment in the design and look of the beginning of the series (I’ve voiced similar complaints about Batman Eternal and Batman and Robin Eternal, and been complimentary towards DC Editorial for getting Eddy Barrows to return to draw the final issue of James Tynion’s run on Detective Comics.) Overall, the hasty wrapup, wasted potential, and uneven artistic output sinks the finale of Future State: Gotham into a disappointing mess.

Artist Cliff Chiang’s short black and white story “Clay” rounds out our final issue of this series – a shame DC never advertised the reprinted backups as an incentive for buyers – I think it could have actually moved more units since they were quite selective with the stories they included, and the quality was quite high overall.

Simone di Meo’s main cover for Future State: Gotham #18 presents an appealing triple hero array of Next Batman, Peacekeeper Red, and Hunter Panic, perched on a roof with neon signs of Punchline and the Next Joker crossed out beneath them – one of the stronger compositions di Meo’s produced in this run. Carlos D’Anda’s cardstock variant presents Jason, mask half-shattered, sitting exhaustedly with a chain weapon, surrounded by smoke and bullet casings – very neon-noir, but not terribly exciting.

Though Dennis Culver tries his best to wrap up too many plotlines in this issue, the end result is a rushed and unsatisfying concoction not saved by passable but by no means, particularly interesting art.