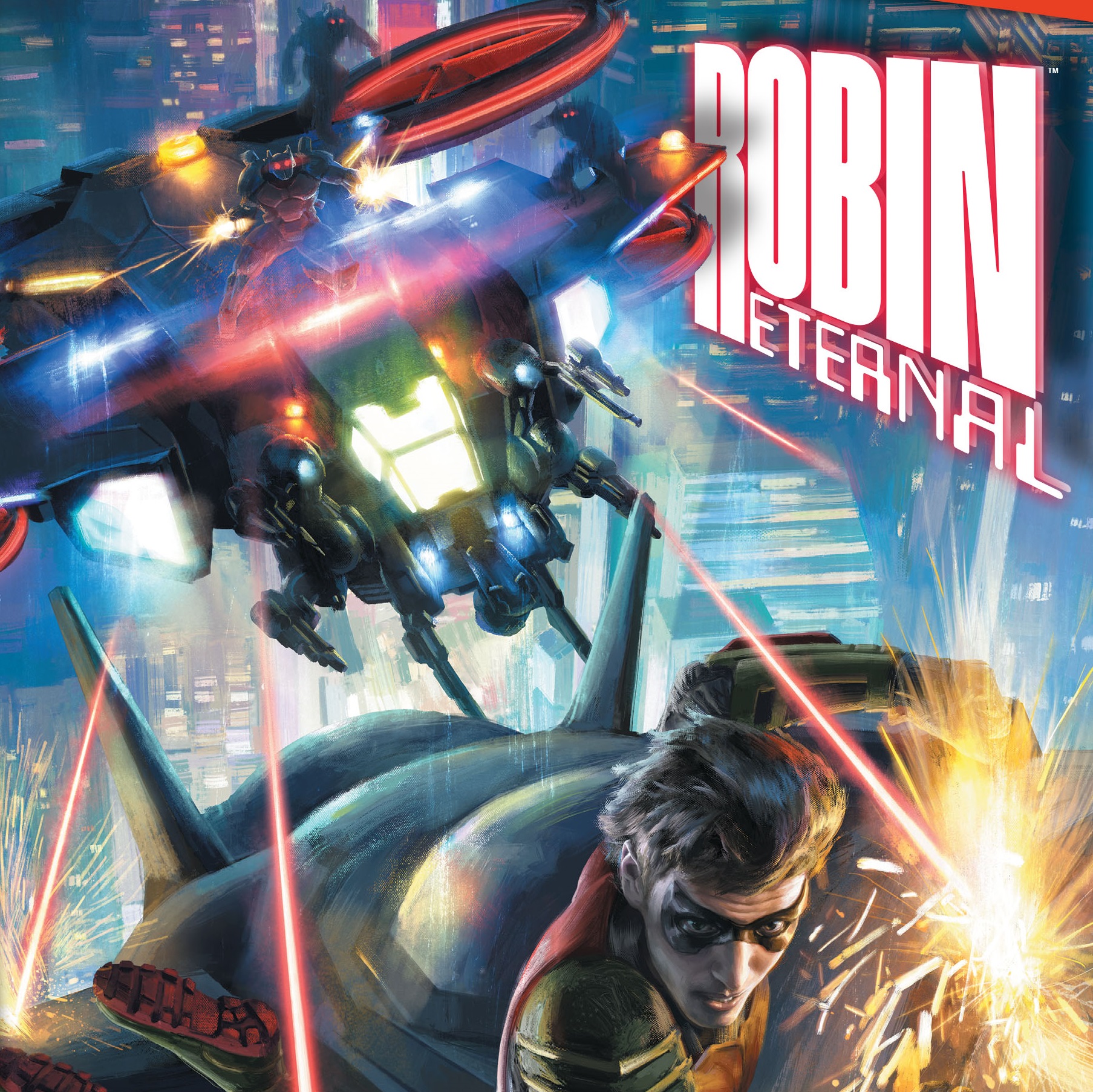 Overview: Robin, Spoiler, and Darcy must work together to stop shipments of Lazarus Resin and prevent this miracle drug’s use in creating advanced cybernetic weapons.

Synopsis (spoilers ahead): As some of the Magistrate’s guards wait for a train shipping Lazarus Resin, Tim Drake watches from above, cloaked using technology. A giant mech attacks as Tim muses how Dick, Jason, and Damian all seem unreliable, which distracts him, so the mech gains the upper hand. Spoiler (Stephanie Brown) saves him by blasting the mech’s head off, surprising Tim, who thought she’d retired into safety – but a welcome surprise, though he puts his foot in his mouth immediately. He asks for her help to stop the shipment of resin, but Steph says she can’t watch the people she loves die.

Tim turns to Darcy, a former member of We Are Robin and current employee of the Magistrate. Using sign language (Darcy is deaf, with advanced hearing aid technology), Tim discovers that Lazarus Resin comes from Lazarus Pits, and juices up the robot “Cybers” than Tim has been fighting. Though Darcy also worries that Tim will die in this mission, she goes along to try to prevent that outcome.

That night, Tim and Darcy rocket pack to the convoy vehicle, where Tim is once again surprised – but glad – to see Spoiler already there. The trio of heroes finds themselves surrounded by cybers, and punch their way to the Lazarus Resin. A huge Cyber, juiced up on the drug, fights them, and Steph’s canon doesn’t affect the self-healing robot this time due to its new formula. The Cyber crack’s Tim’s neck, throwing him down onto the resin-soaked deck – from which he rises, covered in rejuvenating green goo!

Analysis: TV writer (and co-host of the Wine and Comics podcast) Megan Fitzmartin gives us a focused, personal, and intense adventure for Tim Drake, as well as former Robin, Batgirl, and current Spoiler (and possibly also Batgirl) Stephanie Brown and a new character, Darcy, member of the short-lived but fascinating “We Are Robin” movement from DCYou (at the end of the New 52 in 2015). The attention to detail found in both, including Tim and Steph’s historical connection, especially in Tim’s penchant for saying the wrong thing to Steph, is matched by the addition of a cool character like Darcy, who not only was part of We Are Robin, but also provides a nicely handled bit of exploration of a deaf character in the world of Gotham. Fitzmartin doesn’t try to include too many characters or scenes or make this an expansive, massive story. She hones in on a few carefully chosen elements – Tim, Darcy, Steph, the Lazarus Resin, the Cybers – and makes each of them work together in a nicely calibrated bit of storytelling that builds to a dark climax, which will power the story to the next issue and finale.

DC veteran artist Eddy Barrows, paired with his usual inker Eber Ferreira, who drew many of Tim Drake’s adventures in James Tynion’s Detective Comics run, gives Tim his second “death” scene after Detective Comics #940. Though his anatomy and faces are sometimes a bit wonky, on the whole, this is a gorgeous comic, full of action and character, showing Barrows at his best with its dark world and character moments. Colorist Adriano Lucas gives the world of Future State a dark, neon-tinted glow, with moments of softer connection between characters.

Megan Fitzmartin and Eddy Barrows team up to provide a strong first issue for Tim Drake, Stephanie Brown, and new hero Darcy. The writing focuses effectively on a few elements, and the art really communicates the action and character moments.