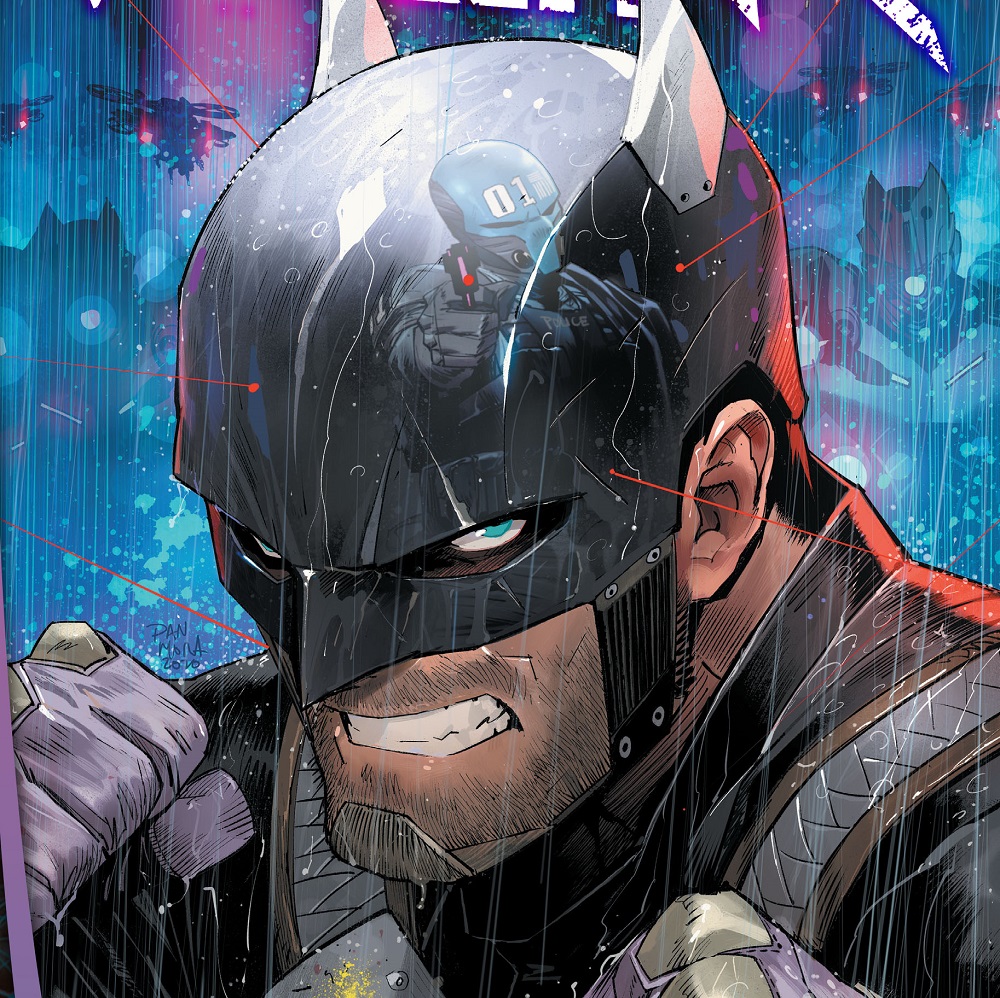 Overview: It’s been two years since Batman was murdered, and in that time, a very-much-alive Batman has put together clues as to the Magistrate’s origin and the powerful money fueling the machine.

Synopsis: At the Gotham Port Authority Shipyard, Batman lurks in the rafters above as looters raid a warehouse for supplies. Before they can steal anything, Cybers, the mech enforcers of the Magistrate, arrive. Batman intervenes. As one of the Cybers grabs Batman, his mind flashes back to two years ago.

At that moment, Bruce Wayne is pursued through an alley by Peacekeeper-01. Bruce makes his way toward the docks, where Peacekeeper-01 shoots him for a second time, piercing his leg. Bruce plunges into the river as bullets chase after him. Down in the depths, Bruce finds a body that looks like him. He floats the corpse to the surface, sneaking an electro grenade on it.

An explosion sends Peacekeeper-01 flying. After some time longer, Bruce resurfaces and catches his breath, plotting his next move.

In the present, Batman has defeated the Cybers, and he heads back toward his makeshift apartment. Bruce rents out the basement of a house belonging to a man named Noah. Noah is a conspiracy theorist, and he distrusts technology, which proves to be the perfect base of operations for Bruce, who is now using the alias of “Jeff Marks.”

In his basement apartment, Bruce dumps out a bag full of Cyber pieces and gets to work on trying to solve his own murder. He’s connected three key companies to the manufacture of all Magistrate tech. The Magistrate, of course, came about when Mayor Christopher Nakano hired the organization to clamp down on vigilantes.

Atop a motorcycle he purchased from Noah, Batman heads to Plexitech, a new megacorporation that manufactures Magistrate armor and ballistics. Prior to the Joker War, Plexitech CEO Carl Bennington was tanking his family’s business. Now, business is booming in a way that suggests something sinister is going on.

As Batman investigates Plexitech, an alarm sounds, and hundreds of drones release from the building. He takes off on his motorcycle, having captured a small but useful clue. Batman ditches the bike during the pursuit, leaving the drones to follow it unmanned. He then pulls out that clue he found. It’s a tiny drone, one developed (but never released) by Wayne Tech prior to the Joker War. Bruce surmises that the Magistrate has been observing Gotham this whole time without anybody realizing it.

Upstairs, Noah smashes his TV, screaming that he’s being watched by his technology. Bruce agrees.

Analysis: In the previous issue, writer Mariko Tamaki, artist Dan Mora, and colorist Jordie Bellaire introduced us to a dystopian nightmare world that had all the lights, glimmer, darkness, and despair of sci-fi classics like Blade Runner. While sparse on details as to how Gotham City transformed into this cyberpunk vision, the creative team created a compelling atmosphere that flowed so beautifully and enveloped readers with its incredible ambiance. In  Future State: Dark Detective #2, the creative team builds upon that first issue, and it feels so effortless.

In this issue, we learn that it’s been two years since the Magistrate seized Gotham and killed Bruce Wayne. This helps explain how this organization is such a gargantuan machine in Future State. It also helps explain why Gotham City looks way different than it has in previous books. The neon lights of this distant futurescape are everywhere. The city is nearly unrecognizable and even more labyrinthine than Gotham traditionally looks.

Much of the story in Dark Detective #2 revolves around filling in these little details. We learn that three corporations seemingly flourished overnight since Joker War, and they are responsible, somehow, for building up the military arm of the Magistrate. We also learn that Bruce has been using an alias and shacking up in the basement of a conspiracy theorist’s home. There, he has spent his time investigating his own murder and following the money trail behind the Magistrate.

This issue is quite the info dump, almost all of it told through bits of narration in Bruce Wayne’s head. As unexciting as that may sound, the art more than makes up for it. It’s gorgeous and easily the highlight of this issue.

Synopsis: Red Hood is in the throes of a motorcycle chase. He’s pursuing Vigilante through the streets of Gotham City. After hooking Vigilante’s wheel and ending the chase, Hood brings the “mask” to the Magistrate. After talking to the Magistrate soldiers about the state of Gotham, Red Hood gets an alert of a robbery in progress. Hood sees on the screen inside the Magistrate station that one of the robbers is dressed in classic Red Hood attire.

Jason Todd follows clues from this robbery that lead him to a bar in the Narrows. He stops for a drink, much to the dismay of the other patrons. The bar patrons get ready to attack Red Hood, but they’re stopped by Ravager. Ravager is annoyed that Red Hood ditched her that morning and the two banter in both a competitive and romantically involved manner. They’re both working for the Magistrate now, bringing in masks, and finding comfort in each other’s company off the clock. Unlike Red Hood, Ravager brings her prey in deceased.

During their conversation, Jason reveals that he picked this bar because it was one of only two places in this neighborhood that weren’t vandalized. That means that people respect it, and it most likely serves as a front for the new Red Hood Gang. This gang operates as a modern-day Robin Hood organization in that they steal from the rich and give to the poor, and the Narrows is a very poor neighborhood.

After a bit of sleuthing, Red Hood finds his doppelganger and pursues this thief through an alleyway. Before he can catch this other Hood, Ravager intervenes by slicing the thief in two. Jason investigates the Red Hood helmet the thief was wearing, noting that it was actually a mind-control device using Mad Hatter technology. The man wearing the mask wasn’t a major criminal; he was just a nobody.

Ravager and Red Hood drive to Wonderland Putt-Putt, the last known location of the Mad Hatter. There, they find Hatter’s long-deceased body. As the two note the bullet through Hatter’s brain, another mask alert comes up. This time, it’s an alert for the capture of Jason Todd.

Analysis: This Red Hood backup story sets up many questions and answers very few of them. It’s compelling to see that Jason Todd has thrown in with the Magistrate, serving as something of a bounty hunter alongside Deathstroke’s daughter. The relationship between Ravager and Jason is interesting, too. The pair have a strange, almost-too-comfortable professional and intimate relationship. Their relationship is definitely one-sided though, as Jason tries to ditch Ravager more than once in this story. Part of the reason behind this seems to be his characterization. Jason is distant, cold, and detached. We know nothing of the inner workings of his mind, and to us, as readers, Jason is more of a husk or cloaked figure we’re observing from a distance. In some books, this “man with no name” type of characterization works, but in this backup story, it leaves a void.

The art in this backup comes across as too cartoon-like, which is unfortunate. While the writing from Joshua Williamson feels like it’s going for more of a tongue-in-cheek, hard-boiled detective story, the art by Giannis Milonogiannis carries a contradictory tone, which kills the tension. What should be darker and more intimate appears stilted, unattached, and akin to art found in old school comics like Archie. It’s not bad; the art just doesn’t feel like it matches the story being told, and ultimately it serves to undermine the detective narrative in this backup.

Future State: Dark Detective #2 builds on the atmosphere and Gotham City futurescape that grabbed our attention last issue. The main story is definitely intriguing, and the art is absolutely gorgeous!