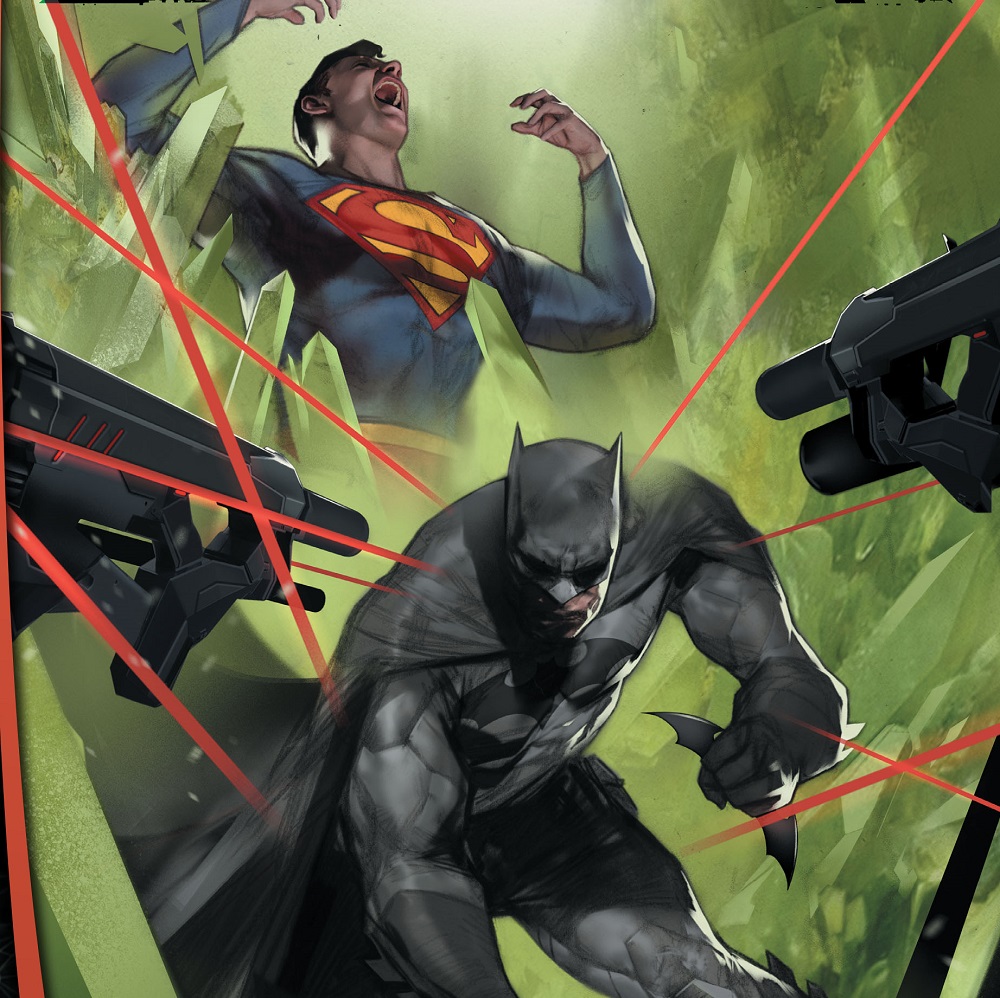 Overview:  Batman and Superman team up to investigate some shadowy events taking place below the streets of Gotham.

Synopsis (spoilers ahead): Below, in an unknown part of Gotham City’s underground, Batman makes his way through reinforced steel doors, the angry squealing of rats echoing around him. Gotham’s vermin have taken on a particularly deformed appearance; eyeballs capable of heat vision split open their backs grotesquely.

Avoiding the disfigured rats, Batman passes through the doors and comes to a stop, his countenance grim. Above him, kryptonite stalactites emanate a soft glow that bathes Batman in a green hue.

In Metropolis, the day before, a young boy, Zandar, despairingly attempts to commit suicide. He falls forward off the ledge of a building, hoping to fall right in front of an oncoming bullet train. To his surprise, and relief, the collision never happens. It’s halted in its tracks by Superman. Zandar can only nod his head in agreement when the Man of Steel gently asks to sit and talk with him, nor can he stop himself from confessing why he tried to end his own life.

Zandar explains that he simply wished to pull off a prank by using the False Face Serum, a simple device he can attach to the side of his neck. The device enables his face to morph into that of any animal, but it comes with unintended long-lasting side-effects. Even with it off, parts of his face will re-transform into that of the animal he was last; Zandar can’t control it.

Superman brings the boy to Dr. Veritas, the head geneticist at S.T.A.R. labs, for help and then gets to work. He traces the serum to its source, which points back to one place: Gotham City.

The bold logo of the Magistrate shines brightly in Gotham’s dark sky, the symbol for Mayor Nakano’s hired law-and-order enforcers. Surprised at finding Superman in Gotham, Batman explains within the safety of the Batwing that his technology makes them invisible to the Magistrates surveillance drones. Should Superman be discovered in Gotham, the Magistrate’s reaction could be extreme.

Superman states that Metropolis is facing issues of its own, the False Face Serum being one of them. A street drug that temporarily alters the user’s face at the genetic level, Batman explains that he’s been tracking it’s growing popularity in Gotham and wasn’t aware it had made it to the City of Tomorrow.

Below them, three people, users of the serum which is evident by their transformed animal faces, celebrate their small victory; the destruction of a drone, property of the Magistrate. Their euphoria is short-lived with the arrival of another drone, one constructed to enforce punishment. Its bullets are stopped by Superman, who destroys the machine easily, but not before it relays an image of his face to a computer elsewhere in Gotham. Observing the blue eyes of the Kryptonian, a masked man informs another to tell the Professor that his wish just came true.

Analyzing the device that can transform faces in his hand, Batman asks one of the young adults where she got it. Her father, a professor at Gotham University, vanished last month with no word, note, or reason. The Magistrate abducted him, she’s sure of it, and the False Face Serum is her only way of fighting back. From a dealer in Old Gotham’s hospital for only twenty dollars? She couldn’t pass up the chance to get around the Magistrate’s facial recognition technology and somehow bring down their drones until they release the people they’ve kidnapped.

Old Gotham is their lead and Batman and Superman follow it down to an entire city built beneath the streets of modern-day Gotham. They find the entrance to the hospital, which is several degrees dirtier and run-down than its sleek interior. They’re unpleasantly greeted by more False Face Serum users, who Superman easily engages with to give Batman more time to investigate one of the hospital’s computers.

Superman glances away from the unconscious individuals at his feet to meet the eyes of Toad; the man introduces himself, rather appropriately, as Mr. Toad, the leader of the False Face Society. Further down the hall, Batman discovers a file on the computer detailing who is funding the False Face Serum. Things are much more convoluted than they seem.

Suddenly, the silence within the hospital is stifling to Batman, a noticeable lack of punching, crashing through walls, or ‘farm-boy exhortations to make better life choices’. The reason is abruptly clear to Batman: Superman is in trouble.

Standing in an unused medical room, Mr. Toad explains to Superman his commitment to the False Face Society and the fight for the freedom of his city. The Magistrate knows everything that happens, every move, interaction, and word out of their mouths. If any one of those is found unacceptable before the Magistrate’s eyes, then the people who are lucky get a warning. The unlucky ones are never seen again. That’s why Mr. Toad has abandoned his prestigious position as a Professor to live underground.

Superman observes Mr. Toad and asks him if he has a daughter. He describes the young woman he met just a few minutes earlier and looks at the man with sympathetic eyes. The serum has risks, side effects that Superman has already seen happen to the man’s daughter. There must be a way to fight back without the same risks, and Superman is willing to help Mr. Toad if the man is willing to let him.

Extending a hand, Superman asks Mr. Toad to remove the device from his neck and hand it to him. They’ll face the Magistrate together.

Hesitantly coming forward, Mr. Toad slowly removes the device, which returns his face to normal. He places it in Superman’s palm and the expression on his face suddenly changes to one of anger. Without warning, Mr. Toad unsheathes a dagger and lunges forward. The blade, made completely out of Kryptonite, easily slides hilt-deep into Superman’s gut. Superman’s cry of pain falls on deaf ears.

Analysis: Writer Gene Luen Yang is the creator of this adventure centering around the World’s Finest along with Ben Oliver, whose artistic talents beautifully bring the story to life. In this first issue, the Magistrate has established a tyrannical rule over Gotham, one that doesn’t quite know the meaning of ‘justice’.

Although it does offer a setting for the story, this isn’t one that can score very many points for its originality. An oppressed city with enforced laws reminiscent of an Orwellian landscape is one that most everyone who is familiar with the adventures of Batman and Superman has seen before. The ominous masked person covertly observing them isn’t a new concept either, although I wouldn’t necessarily say the same for the face-changing serum. In a way, it showcases the comic book-worthy world the heroes live in; a world where aliens save lives, vigilantes protect cities, and regular humans can alter their faces on a genetic level with a simple piece of technology.

Within this issue the dynamic between the World’s Finest is established; both friends and colleagues, Superman and Batman’s relationship is sustained by their respect for the other and their shared same goals. Their methodology for achieving these goals, however, is noticeably different.

Yang highlights this contrast easily; Superman’s true identity isn’t hidden from the world and neither is his approach to stopping crimes or investigating them. Shadows and secrecy aren’t elements in his playbook while the exact opposite holds true for Batman. The tension born from this is noticeable yet not necessarily a big deal, yet. It’s a commonly accepted thought that Batman and Superman represent opposite archetypes within the world of comics, two very different characters with very different personalities. And while this is certainly problematic for them at times, it also presents the wonderful opportunity for some amusing interactions and conversation between the characters, which are both definitely present throughout this issue.

Despite the familiarity with the story’s setting and Magistrate-type problem, the ending certainly offers a surprise, with Mr. Toad stabbing Superman in the gut. Where he got the Kryptonite dagger, why he stabbed the Man of Steel, and what the Faceless Society is really trying to achieve are all questions left hanging without answers at the end of the page.

Overall, I thought Future State: Batman Superman #1 was interesting; it decently expressed the dynamic between the two superheroes and sets the stage for the rest of the story. I enjoyed the little details that were included, such as the Superman key chain attached to Batman’s USB drive, and I’m curious as to how things will develop next.